The Netherlands – In Amsterdam, where the occupation of empty buildings was made illegal in 2010, a new generation of squatters has been staging bolder and more daring actions, continuing the local tradition of defiantly ignoring the ban.

Part of a new generation of squatters that have been more engaged than in recent years is the Anarcha-Feminist Group (AFG). The Amsterdam-based group is a decidedly feminist cohort of only female and/or femme activists.

AFG’s squatting actions are always politically motivated, often symbolic, and their stated goal is to use squats for other activist organizing. Their actions are marked by banner-drops and bullhorn manifestos, solidarity with sex workers, statements against crooked real estate companies, and denunciations of the racist colonial history engraved in the very architecture of Amsterdam.

Though many of their recent squats were violently evicted by the police, they feel motivated and ready to continue their actions, despite potentially serious legal consequences.

Unicorn Riot sat down with Alice and Kača, two members of AFG who invited me in to their legalized squat in a cozy 4th floor flat. Incense smoke floats around the room and the sun shines through an open window – it’s an unusually warm spring day.

“Surely Anarchism should mean we fight for equality and it should be implied that we also fight against the patriarchy, but we felt that it wasn’t highlighted enough,” says Alice. They started AFG as a way to organize outside of the often male-dominated circles in Amsterdam, she says – with exclusively women, non-binary and trans people.

Though most large Dutch cities have squatting communities, Amsterdam was once a squatter’s paradise. First arising as a part of the 1960s protest movement, organized squatting action continued throughout the 70s and 80s. The housing crisis has only gotten worse as the years went by.

The movement had ups and downs in momentum, with a wide array of groups and sub-groups, and was always marked by routine violent evictions. Activists see police intervention and removal from squatted buildings as inevitable – especially now, after the squatting ban.

Before the new law, squatters were able to enjoy protection against evictions by merely showing police that they have a presence in the building. But this is no longer enough to avoid being forcefully evicted.

“We all felt like shit,” said Kača, who has more experience for being a bit older than Alice. “Before you just had to find a house that had been empty for a year and bring a table, bed and chair and then you had this feeling of safety. The only thing that changed in a positive way is that now a house doesn’t really need to be empty for a year anymore.”

The new, younger generation of squatters seems to ignore much of the old codes and dogmas, instead opting for a new way forward. Occupying houses at any cost – eviction orders be damned.

The prevailing laws against eviction in the Netherlands hold that if a person is living in a space – whether they own it or not – they cannot legally be evicted without a court order. This is known as “domestic peace” (huisvrede in Dutch).

But squatters say that since the squatting ban, police ignore this rule and summary, illegal evictions are common. Police often violently arrest and/or assault those involved.

That was the case at a recent eviction in the Red Light District, a famous central neighborhood in Amsterdam. Members of the Anarcha-Feminist Group occupied a vacant building that was empty and unused except for a boutique soap store on the ground floor. They say it was part of a gentrification project called “Green Light District.”

“The whole neighborhood will change and the prices will go up for sex workers. It’s greenwashing,” says Kača. The idea is to renovate buildings as more ‘sustainable’ and outprice poorer residents. “They don’t like the image of certain people and they’re being pushed out,” Alice adds.

This occupation was as much a denunciation of speculating real estate companies and runaway gentrification as it was of the racist, colonial history of Amsterdam, as symbolized in a bust on the architecture of the building.

The bust is of Admiral Tromp, a Dutch navy commander during the worst of the colonial escapades of the Royal Dutch Indies exploitations. Pictured alongside him is a racist, stereotyped depiction of a Black boy who was his slave.

The authorities were not happy to learn about the occupation in the Red Light District. Slowly, the police began disputing the terms of ‘domestic peace,’ even though the squatters had meticulously documented their presence in the building. According to Alice and Kača, Amsterdam mayor Femke Halsema caught wind of the squat and demanded they be evicted. They still suspect a conflict of interest, claiming the mayor has stakes in the ‘Green Light District’ project.

“They don’t like people especially a bunch of queer people women squatting and building in the center talking about colonialism you know?”

Before long, police busted down the door. One of the squatters tried to climb out the window as the police advanced up the stairs. They fell and nearly rolled off the roof.

“Luckily, they fall on this little latch but if it would’ve been slightly more to the right or backwards or something, they would’ve died,” Alice tells me.

When Unicorn Riot visited the building in question, I asked the young employees of the posh soap store if they saw anything. They said they never saw anyone in the building and that they only heard about the occupation from a neighbor. They also told me they were using the whole building for storage, which Alice and Kača tell me is not true. They had a box or two of soap there, but the apartments were mostly empty.

At another building that AFG recently occupied, on the downtown street Spuistraat, the windows are now full of posters for a company called VPS, an “anti-squatting” company. After AFG was also forcibly evicted from this building, the owner went to VPS for their services.

Anti-squatting companies offer the service of protecting property owners’ buildings and ensuring that they don’t get squatted. To do this, they rent out the rooms to students or artists for a lower fee than usual, often while the owner tries to sell the building. In exchange, the tenants have no rights and can be told to leave with only a few weeks’ notice in some cases. When building owners use an anti-squatting company, they are essentially hiring a slum lord to rent it out to poor young people.

In response to an email, VPS said that the Spuitraat building was being managed by their company so that “the owner remains in control of his own property.” They say three people are living there now, although Unicorn Riot heard from other sources that in fact, no one lives there and the flat is just being used as artist studios. VPS wouldn’t disclose how much rent they are charging.

After several more evictions with various participants getting attacked by police, fundraisers were set up to raise money for AFG’s legal fund. Members of the group were sentenced in court for hundreds of euros each in relation to the eviction of the Red Light District building.

According to an email from AFG’s lawyer, one of the charges is for allegedly “insulting police officers.” This, after several activists on the scene were beaten by police batons and one was snatched by a plain clothes officer. Whether the pattern of illegal evictions will ever be addressed in a court of law is yet to be seen.

Alice and Kača are certainly not the first to accuse the Amsterdam police of systemic racism when they tell me a POC member of AFG was searched by a male cop for weapons while other white members were not.

“I feel angry, upset, tired… but also really determined because of this,” Alice says.

“These experiences of police brutality… it’s just really horrible and it’s traumatic. But somehow, it also makes you angrier and more determined. And it confirms your beliefs in a way, and I think that also makes us stronger as a group.”

Kača says she is happy to see younger people carrying the flame. “People are getting more radical again, so I can organize with them again, you know? You cannot do it on your own. So I’m really happy that there is this eagerness to do it again.”

Since our interview in Spring, AFG suffered through several more evictions but is finally able to stay in their most recently squatted building. They say they will use it as a social center and a base for assemblies, skill shares and talks. 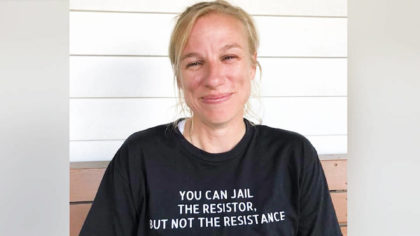 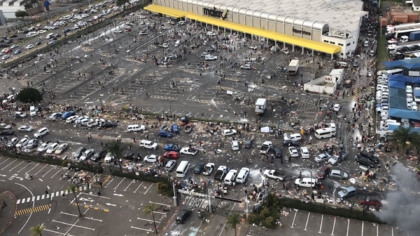 Over 212 Dead and 3,400 Arrested as Protests Rock South Africa