Philadelphia, PA – Thirty-six years ago today, the Philadelphia Police dropped a bomb on a home in West Philadelphia that served as the headquarters of the Black liberation organization, MOVE. The bombing killed 6 adults and 5 children, burned down 61 homes, and displaced 250 residents.

Members of MOVE and the Philadelphia radical community are observing the anniversary of the tragedy, gathering at the former MOVE HQ site on Osage Avenue before marching to Malcolm X Park.

In April, news emerged that the bones of two MOVE families’ children—Delisha Africa and Tree Africa—had been taken from the bombing site and ended up in the custody of the University of Pennsylvania. UPenn staff have been casually storing the murdered children’s remains in a cardboard box on a shelf, and using their remains as teaching props for classes.

On April 28, MOVE bombing survivors and community members protested at the UPenn campus demanding the firing of university staff involved in disrespecting the children’s remains. MOVE and supporters have also called for the removal of a street sign honoring former Philly Mayor Wilson Goode, who oversaw the 1985 bombing.

Today, Philly Mayor Jim Kenney announced the resignation of Health Commissioner Thomas Farley. Kenney said he learned Farley had identified additional remains from the MOVE bombing and had them cremated and disposed of instead of providing them to family members.

In the 1970s, MOVE advocated for the rights of animals and the environment, in accordance with the teachings of their founder and leader John Africa. After a series of extreme police brutality incidents against MOVE members by Philly Police, the group found itself increasingly drawn into confrontations with Philly’s notoriously racist law enforcement apparatus under then-Mayor Frank Rizzo.

On August 8, 1978, an earlier confrontation took place at MOVE’s then-headquarters in the Philly neighborhood of Powelton Village. 9 MOVE members were sentenced in a politically-charged trial for the death of an officer who died in the 1978 confrontation; evidence suggests the officer died due to friendly fire from other police.

After years of imprisonment and medical neglect, 7 of the MOVE 9 have been released (two of them—Merle Africa and Phil Africa—died in prison). Delbert Africa, one of the MOVE 9 who was freed in 2020, died just months after his release, likely due to being denied proper cancer treatment while incarcerated.

Imprisoned journalist and former Black Panther, Mumia Abu-Jamal, convicted by a racist judge based on falsified evidence in the 1981 murder of Philly cop Daniel Faulkner, is also associated with MOVE. Abu-Jamal reported closely on police brutality against MOVE and was believed by many to be targeted for a death penalty prosecution in part due to his support for MOVE.

Abu-Jamal has been experiencing extreme medical issues due to neglect in Pennsylvania’s prison system. On April 24, a coalition of groups, including MOVE, demonstrated in Philly, demanding Mumia’s release from prison: 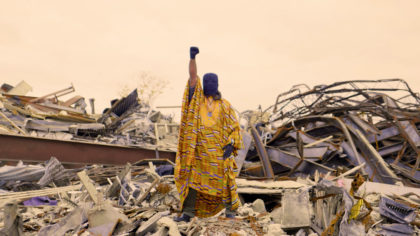 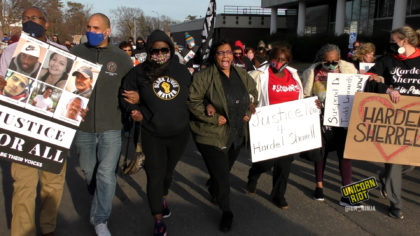 Demanding the Passage of the Hardel Sherrell Act