Santee, CA – On Wednesday in suburban San Diego County, Republican officials promoted an apparent hoax falsely painting transgender people as violent predators. Among their supporters were clearly identifiable Proud Boys and at least one man with Nazi imagery tattooed on his head.

A 17-year-old recently claimed she was exposed to a nude “male” in the Cameron Family YMCA shower. While the trans woman she targeted had previously undergone gender reassignment surgery, the teenager’s misleading account sparked a transphobic moral panic claiming the gym’s trans-inclusive policies, in compliance with state law, were causing helpless underage girls to be assaulted by naked men.

The Cameron Family YMCA in Santee has had to repeatedly close due to threats from the escalating anti-LGBTQ+ campaign seeking to deny trans people the access to public facilities guaranteed to them by California law.

About 500 anti-trans rallygoers gathered in front of the local YMCA while about 2-300 people attended a nearby counter-protest and dance party organized by the San Diego chapter of the Party for Socialism and Liberation (PSL) and local antifascist collectives.

American Guard is a spinoff group of the Hammerskin-linked Vinlanders Social Club organized by Brien James — the Anti-Defamation League considers them “hard-core white supremacists.“ In recent years they have turned up at events like pro-police rallies alongside Proud Boys and the now defunct neo-nazi American Identity Movement which once called itself Identity Evropa.

San Diego Sheriff’s Department deputies were present with riot gear and crowd control munitions, but did not intervene. No arrests or injuries were reported. 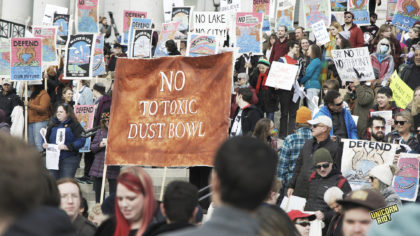