Minneapolis, MN – After an array of organizers from concerned community members to Black Lives Matter Minneapolis to the Black Liberation Project spontaneously organized the #4thPrecinctShutDown, donations from the extended community poured in along with the rain and a furthered determination to stay. Here are some of the thoughts of the demonstrators:

The demonstrators who are set on seeking Justice for Jamar support continued to grow along with the numbers of people throughout the day. A “No-Cop Zone” was again called for as a march started to take the streets of Plymouth Avenue heading East from the precinct. Eventually the march merged onto one of the most major interstates in the country, Interstate 94. Demonstrators formed a line of locked arms extending across the five lanes of the I-94W for over an hour, blocking the traffic from flowing.

Here is the livestream of the march that led to the shut down of I-94W:

The demonstrators entered the Interstate in this stream:

Here is the last stream that our streamer (Niko) on the freeway could post before having signal difficulties:

There were some technical issues with Niko’s streaming device leading some to speculate that his 4th and 1st Amendment rights were suspended by an IMSI catcher, Stingray or Kingfish cell phone tower spoofing device which are known to be possessed by the Bureau of Criminal Apprehension and the Hennepin County Sheriff’s Department.

After four dispersal orders were given, the troopers started to make arrests. Unicorn Riot Producer Niko was the first person arrested at the blockade line on the freeway, which you can clearly see in this video:

In the police report for Niko, it is clearly stated that he was targeted first and targeted for having a camera. Second to be targeted was Fox 9 reporter Jack Highberger. This extends a pattern of crushing media coverage of popular movements which reached a high tempo during the 2008 Republican National Convention. As with dozens of 2008 arrests, Niko was clearly marked with a press pass and yet was grabbed first. US News and World Report reported on journalism organizations objecting to the targeted arrests last night. At the highest levels authorities are no doubt aware his coverage was being viewed live by at some moments 4000 people (Lorenzo took over filming from the side of the Interstate that arrests were being made). The following video is the last video Niko was able to post on Twitter before he was arrested:

The total number of arrestee’s on Interstate 94 near the Broadway Ave. N. intersection varied from 33 to 51, but nevertheless, dozens were arrested, booked and released, and by the update of this article (Dec. 6, 2015) most have already completed their court dates.

In the most unfortunate turn of events, Jamar Clark, the focal point of the protests, was removed from life support.

UR team members incurred expenses to push this data over cellular networks and can use your support; the collective effort has been present as #Justice4Jamar reached national awareness. If you can support our work please chip in here. 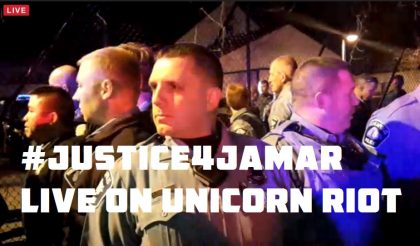 Police Precinct Occupied after Jamar Clark is ‘Executed’ while Handcuffed 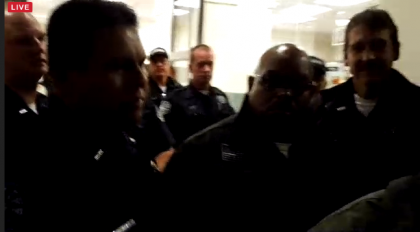