We interviewed participants along the eight-mile trek on the importance of Liberation Day, the causes of the 1973 occupation and the continued influence of the 71-day standoff.

The walk was interrupted by a police officer who tried to arrest a participant holding a Medicine Staff. Elders told the police officer that a ceremony had been done on the staff and that it had to make it to the grave site. The walkers proceeded to walk to the site declaring they were performing a peaceful protest. The walk up to the grave site at Wounded Knee, and prayers were given by elders in remembrance of the 1890 massacre. After the prayers was the “We Shall Remain Gun Salute.”

Unicorn Riot was able to interview a veteran of the Occupation of Wounded Knee during the walk who explained the importance of Liberation Day:

We interviewed Melvin Lee Houston a veteran of the Occupation of Wounded Knee who’s now a member of the Santee Sioux Treaty Council. He spoke on the importance of Land Sovereignty and Water issues.

“My community, the Santee, where I’m from, we have not drank tap water for 20 years! 20 years! We had a generation grow up drinking water out of plastic water jugs, because you cannot drink the water and there is no solution in sight.” – Melvin Lee Houston

After the “We Shall Remain Gun Salute”, Unicorn Riot attended the Liberation Day Wacipi which featured a thanking of veterans who participated in the Occupation of Wounded Knee.

Before the Wacipi, the family of Wounded Knee Veteran Philip Gilbert sponsored a community meal. The Wacipi featured the crowning of Miss & Jr. Miss Liberation Day along with Miss & Jr. Miss AIM Grassroots.

Here is the livestream of the Wacipi: 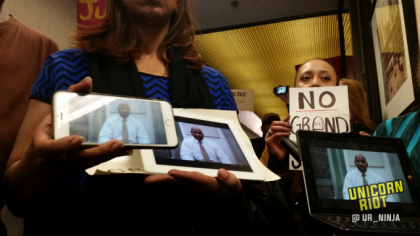 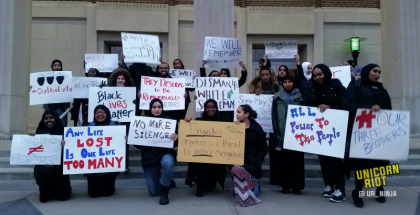