Starting at six in the morning at Home Depot in Northeast Minneapolis, janitors formed a picket line in a strike action.

We were live at the janitorial strike against poverty wages & #Trump in #Mpls, watch raw footage at https://t.co/FXz46knSaF #J20 pic.twitter.com/3HM7CfzpXW

Unicorn Riot was live to document this early morning action.

Photos from this morning's janitorial labor strike, picket at Home Depot one of the janitors' cleaning clients in the Twin Cities. #J20 pic.twitter.com/Y7KEFRncJw

Home Depot and its cleaning contractor were targeted for the first strike in the country since Donald Trump won the election because the founders were major Trump supporters and to protest “poverty wages and Donald Trump’s anti-worker agenda“.

“The two founders of Home Depot have donated millions of dollars to Trump and one of Home Depot’s major investors supports Trump. Home Depot uses the Trump model of business for its janitorial services: using subcontractors that hire immigrant workers and sometimes face lawsuits for wage theft.” – Facebook event page

To watch the full Home Depot strike livestream, see below:

In the early afternoon, students walked out of classes from the University of Minnesota, Augsburg University, other colleges, and high schools and met up with several marches on the southside of Minneapolis.

We are #live in #mpls at the #BlackSnakeResistance #NoDAPL march currently headed into downtown. #DisruptJ20 https://t.co/IpBZlO4dfJ pic.twitter.com/AlHtjFaUXy

To watch the Black Snake Resistance march, see the videos below:

When the marches converged with each other, an effigy of Donald Trump was burned in the middle of Franklin and Nicollet Avenues.

As the crowd milled around, some burned signs and more Trump effigies, and a dozen or so people dressed in all-black made up the Queer Black Bloc. They maneuvered themselves to the light-rail tracks on 5th Street.

Under plumes of colored smoke from smoke canisters and fireworks, the group set off on a breakaway march. The first stop of the march was the Juvenile Detention Center (JDC), where incarcerated youths from Hennepin County, primarily Minneapolis, are housed, mostly temporarily, as they may be waiting on court or a different out-of-home placement.

A brief noise demo, similar to ones in the recent past, took place in the back of the JDC building. Visible through the windows were incarcerated youth who were able to see fireworks lit off on their behalf and hear chants of “burn all the jails, burn all the prisons, just make sure the cops are in ’em”.

The group made its way past Wells Fargo corporate offices and in the wake of the group, Wells Fargo signs had holes kicked through them. This same Wells Fargo was targeted on December 1st, with a divest from DAPL action.

The breakaway march eventually went back to the government center where a long list of speakers pressed the community to continue to show up.

To watch the livestreams from the evening of Friday, January 20th, see below – for stream of the breakaway march tune into the 34:40 mark of the video directly below:


To see our coverage from Minneapolis after the election, see here, and watch the video below: 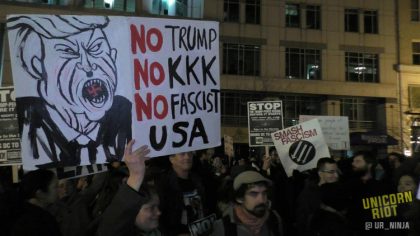 FERC Protest, Evict the DNC, & Disrupt the DeploraBall on the Eve of Trump’s Inauguration 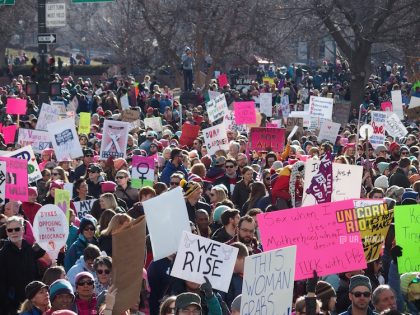