Minneapolis, MN – After continued pressure, Minneapolis Mayor Jacob Frey announced Friday, July 21 that the body camera footage from the officers who killed Thurman Blevins last month will likely be released to the public by the end of July. Official reports have shown inconsistencies and many questions have continued to fester after the killing of Blevins, who was shot while running away.

On June 26, three days after the killing of Blevins, Mayor Frey said that they would release the body camera footage to the public after the Blevins family has been briefed and the BCA is finished with its interviews. The Blevins family have been patiently waiting, expecting that the statement meant that it would happen sooner than a full month later.

Activists in Minneapolis and the Blevins family have been pressing for his office to follow through with his statement. An action outside the Mayor’s Office on Friday July 20, put on by the Blevins family and the Justice for Thurman Blevins Jr. group demanded the “unaltered, unedited, and unabbrieviated footage be released.”

Sydnee Brown, Thurmans’ cousin, stated on Friday that Mayor Frey has lied to the Blevins family three times in their communications. It was after this action that Frey announced the supposed deadline of releasing the footage by the end of July.

Blevins family and community members are searching for answers to questions that remain unanswered; did the police go after the wrong guy, why did the official number of 911 calls change so drastically from four 911 calls to actually only being one 911 call, and did the descriptions of the 911 suspect match what Blevins had on, was there someone else that the police were looking for when they encountered Blevins?

Some think that the footage will show some answers and others think the videos won’t show how Blevins may have been mistaken for another person and that the police jumping out on Blevins with their guns drawn, if he did not fit the description of the 911 call shows prejudice leading to his death that won’t exactly be captured on the body camera videos.

Furthermore, though it may be illegal for certain people with past record of crimes to carry a gun, and if Blevins was carrying a gun with a past criminal record making it illegal for him to do such, his family says it does not permit the public execution of him to happen.

Unicorn Riot reported from a close proximity to the scene where Blevins was killed just hours after the shooting. We spoke to a few witnesses who all described Blevins without a gun and all said that he was running away, down an alley, when he was shot to death.

The story from the witnesses went as such – Blevins was sitting on the corner of 48th Ave. and Camden Ave. with his girlfriend drinking out of a glass and holding on to a bottle, squad car 420 rolled up and two officers got out with their guns drawn yelling at Blevins.

Blevins stood with his hands up and witnesses say he may have been tased at that time. Blevins then ran down west down 48th Ave. and south up an alley between Aldrich and Bryant Avenues and was gunned down three houses up the alley.

We heard from a neighbor named Robert Lang the day after the shooting who said that a handgun was seen next to Blevins after he was shot. That was the first version of events that possibly placed a handgun near, or with, Blevins besides the official police narrative that Blevins had a gun and was shooting it.

Lang said that he was doing yardwork outside when he heard someone yell, “Drop the gun!“, then heard two shots and after a brief delay, a flurry of about eight to ten shots. Lang said that he then looked into the alley by his garage and saw Blevins laying there bleeding out. He said that he saw a black handgun a foot or two away from Blevins upper body and police ran up to the scene, kicked the gun away, yelled “clear“, and then told Lang “get the fuck back” into his yard.

In the alley where Blevins took his last breaths, a memorial grew, and a vigil happened the day after the killing. We spoke to Juan Graham about why he was taking part in the vigil.

Minneapolis Police officers Justin Schmidt and Ryan Kelly were the officers who opened fire, shooting Blevins with a flurry of bullets from their service weapons. They are both on paid administrative leave, see their personnel files here, Kelly [PDF] | Schmidt [PDF].

Justin Schmidt, an Iraqi army veteran and police trainer for Archway Defense contracting group, has five complaints against him in the four years he has with the Minneapolis Police Department (MPD). Three of those complaints were filed from community members and two filed internally, by either a commanding officer or a peer.

After the shooting, Archway Defense edited their website, deleting Justin Schmidt’s picture and changing his name to simply, J.S., to not show Justin Schmidt’s real name in the ‘Team’ section.

Ryan Kelly, employed by the MPD since late 2013 has had six complaints filed against him, all of the complaints are closed and no discipline has been taken against Kelly, or Schmidt, regarding their complaints.

During the action at the Mayor’s office on Friday, Thurman’s cousin, Sydnee Brown, said they are demanding that Kelly and Schmidt both be “prosecuted to the fullest degree of the law.”

Audio from police radio scanners stating locations have raised some questions as to if Blevins was the one that prompted the 911 call. Three squad cars radioed in from around the scene, 420, 460, and 470. Squad car 420 was the car that carried Kelly and Schmidt, they are the car that rolled up to Blevins on the corner of 48th and Camden and emerged with their guns drawn.

Moments after dispatch called in a suspected intoxicated shooter around 46th and Lyndale, squad 460 radioed in that they were at 47th and Lyndale about to make contact with a suspect matching the description. At that point Squad 470 joins them.

Squad 420 then dispatches, “chasing one, 48th-Aldrich, westbound, man has a gun”, after they pulled up to Blevins and a foot chase ensued. They stated that he had on a “black tank top, brown shorts“.

Next dispatch from the officer in pursuit was, “Southbound in the alley, Aldrich and Bryant,” and then “Shots fired, shots fired, one down,” squad 420 said, and they called for medics, “One down, EMS to our location … I’m going to direct the ambulance in, 48th Bryant to Aldrich.” All squads in the area were then called in to block the area off and for back up for the officers. Squad 470 radioed in, “We’re starting to get a lot of people coming out into the area, so any squads that can come up here, we need everybody.”

If squad car 460 and 470 were seriously about to encounter a “suspect matching the description” around the same time that squad 420 was jumping out on Blevins about three blocks away, then seemingly it could be two different people. The dispatches from the locations seem only seconds apart but we cannot verify where each squad was at a specific time.

All of the immediate neighbors we spoke with say they never saw an ambulance come for Blevins. They said that Blevins body was in the alley until about 1 a.m. before being taken by the authorities.

The BCA took a work truck that was riddled with three bullets from the MPD. The wife of the worker who operated the truck said that her kids and her husband had just left the house through the alley 15 minutes prior to the shooting and that she now lives with an extra bit of fear for their lives doing simple tasks outside now.

On July 2, the MPD released the transcript from the one 911 call to the public. Many were confused as to why it was a transcript of just one 911 call when initial reports during the day of the shooting were that there were at least two 911 calls about a person shooting a gun near 46th and Bryant and possibly up to four calls.

The 911 caller said that a six foot, “light skinned” male, approximately 35 years old, with a “bald head taper with designs in it“, had shot his gun twice in the neighborhood in the last twenty minutes, not shooting at anybody in particular, “just in the air and at the ground.”

The caller described the shooter as wearing a white or grey “wife beater” with a “black back pack” and carrying a large bottle of Amsterdam. Some witnesses claim that Thurman Blevins was shirtless, while others say he had a black shirt on. Mostly every witness said Blevins had a bottle with him. The BCA had said that they found a black and silver 9mm handgun at the scene of Blevins death. Lang, the neighbor, stated that he saw a black handgun. The 911 caller said that they thought that the person shooting the gun had a silver 9mm, or at least that it was “chrome at the top“.

The 911 caller also stated that they didn’t want to be labeled as a snitch and wouldn’t give their name to the dispatcher, saying that they “could be killed doing shit like this.”

The BCA said they will release the evidence when their investigation is done. That includes if they found any cartridges from the shots fired that the 911 caller was alleging, and it includes if those ballistics matches the gun that the BCA claim was found near Blevins, and if Blevins DNA was on the gun, or if gun shot residue was found on Blevins hands (which reliability varies case by case).

The body camera footage, however, is supposedly set to be released to the public by the end of the month, not by the BCA, but by the Mayor of Minneapolis. We will continue to provide coverage of the Blevins case.

UPDATE – July 29, 2018 4 am Central: On Friday, June 27, KSTP released audio from a neighbor’s security camera close to where Thurman Blevins was fatally shot by MPD. In the last half a minute of Blevins life, he can be heard in the audio yelling back at police who are threatening to shoot him if he doesn’t put his hands up.

His last words are “please don’t shoot me“, “leave me alone” and what sounds something like, “I’m unarmed” or “I’m not armed,” before he was shot to death in the alley by a dozen or so gunshots, including to his head. 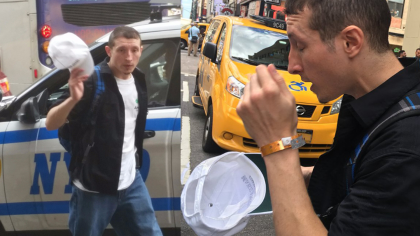 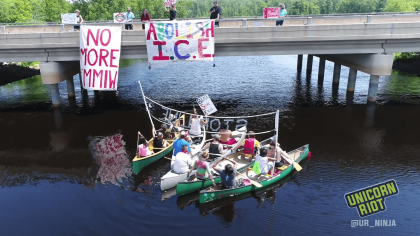