Denver, CO – After three days of striking and late nights of negotiating, many Denver teachers returned to their classrooms on Thursday, February 14, 2019 after a tentative agreement was struck between the Denver Classroom Teachers Association (DCTA) and Denver Public Schools (DPS).

The agreement was reached Thursday morning around 6am after a 20-hour long bargaining meeting. The DCTA had a vote of 93 percent to approve the strike four weeks ago. The primary reason being the teachers’ base salaries.

“I don’t want to strike, but we have the right to be compensated fairly, we have the right to earn a livable wage, so I don’t think we’re asking for anything outrageous, and other districts are already providing this to their teachers. We need it for our teachers.” – Paula Zendle, ELA Teacher at Denver Green School

Currently, the starting teacher salary for someone with a bachelor’s degree in DPS is $41,320.34 before taxes. This amount is the average mean of the two differing BA starting salaries we found on the DPS website: $39,851 and $42,789.67.

For a single, independent person, this DPS starting salary can provide some financial stability in Denver, but for a single parent with one child, this salary falls nearly $20,000 short of a livable wage.

According to the Massachusetts Institute of Technology’s Living Wage Calculator, a single parent with one child living in Denver must earn an annual gross income of $60,359 to ensure they can support their family.

Because of the strike and the persistent negotiations, Denver teachers will start seeing 7-11% base salary increases August 1, 2019. The starting salary for someone with a bachelor’s degree will move up to $45,800.

Nationwide Teacher Strikes on the Rise for Livable Wage

Cost of living is a driving force for the mounting teacher strikes nationwide. In West Virginia, teachers went back on strike for the second time in less than a year. Their strike in 2018 lasted 10 days and fought for higher pay and lower health care costs, however this new strike only lasted two days and began on Tuesday, February 19, 2019. This time the teachers were fighting against Senate Bill 451, which would use public dollars to help fund new charter schools and private school tuition.

In Arizona, House Bill 2017 may end up inspiring another teacher walkout, which is what the bill is intended to discourage. Representative Kelly Townsend has proposed the bill which would fine anyone up to $5,000 who causes a school to close when it’s supposed to be open.

Similar to West Virginia, Arizona is a right to work state where employees have little to no job protection if a strike occurs and do not have the ability to bargain collectively.

“Unless there are dramatic changes to the district’s approach, including spending more money on students, nurses and counselors, lower class size and a living wage that will keep Oakland teachers in Oakland classrooms, we will strike on February 21st.”

The union, which represents over 3,000 teachers, has been working without an official contract since July 2017. The teachers are asking for a 12% pay raise over the next three years.

Unicorn Riot was on the ground during the first day of the Oakland strike:

#Oakland, CA: Thousands of striking teachers and their supporters are rallying. Now marching to the Oakland Unified School District to demand a contract. pic.twitter.com/2HWH2LgXyS

Also in California, 32,000 teachers went on strike in Los Angeles last month. The strike lasted six days and lead to a contract agreement that fulfills the educators’, as well as the students’ demands.

At a Making Black Lives Matter in Schools event a year ago in L.A. organized by the group Students Deserve, students spoke up about their negative experiences with “random searches.” In fact, the Los Angeles Unified School District has an official policy that all secondary schools must conduct daily random searches using hand-held metal detectors at various hours of the school day.

According to a report done by the ACLU of Southern California in June 2018 called Here To Learn, the student searches are not random:

“Students, parents, and teachers all report school staff targeting certain groups, including low-income students and students of color or enforcing the policy more frequently in schools that predominantly serve those student groups . . . Students consistently report feeling alienated, disrespected, and disempowered by the policy, explaining that the policy devalues their education and makes them feel like criminal suspects.”

This policy of random searches exposes the priorities of the state of California, which spends $11,495 per student, but spends $81,000 to incarcerate an inmate. The annual costs come out to be about $45 billion in education costs, and $12.1 billion on corrections.

The nearly $70,000 difference is the largest in the nation, which is why teachers in Oakland and L.A. have been fighting for more of a Community Schools model with increases in support staff like nurses, counselors, and librarians, in order to move away from a school-to-prison pipeline model.

In a report called State and Local Expenditures on Corrections and Education, done by the U.S. Department of Education, Policy and Program Studies Service, in July 2016, they found that:

“Over the past three decades, state and local government expenditures on prisons and jails have increased about three times as fast as spending on elementary and secondary education. At the post-secondary level, the contrast is even starker: from 1989–90 to 2012–13, state and local spending on corrections rose by 89 percent while state and local appropriations for higher education remained flat.”

Because of these findings, the department provided recommendations:

“Reducing incarceration rates and redirecting some of the funds currently spent on corrections in order to make investments in education that we know work — including significantly increasing teacher salaries for great teachers willing to work in hard-to-staff schools.”

In his first statewide budget proposal as Colorado Governor, Jared Polis decided to give the CO Department of Corrections $922 million in their operational budget for fiscal year 2018-19. On top of those costs, the department is trying to reopen two prisons: Centennial South, formerly known as Colorado State Penitentiary II, in Cañon City, and Huerfano County Correctional Facility in Walsenburg, which would cost an additional $31.1 million.

The Affects of Charter Schools on Public Education

About 90% of public education in the United States is funded by state and local dollars, which means the higher the property taxes in an area, the more money there is for public education. However, a problem that public school teachers in West Virginia, California, and other parts of the country are seeing is that money is being diverted away from public schools to charter schools. Since 2008, the charter school industry in California has taken nearly $600 million from public schools each year.

The increase in charter schools can be attributed in part to U.S. Education Secretary Betsy Devos, whose love for charter schools doesn’t seem to be based in their success. Last spring during a 60 Minutes interview, when asked about Michigan public schools and if they have improved since adding in charter options, she said they actually were “doing worse.” However she did mention “pockets,” which she was unable to specify in the Michigan public schools, that had improved.

In 2009, Colorado put a budget stabilization factor into education funding during the Great Recession (many states put in similar funding cuts), which meant that hundreds of millions of dollars have been withheld each year from the annual education budget. However, Governor Polis intends to shrink the cutbacks, and has included free, full-day kindergarten in his budget request for the 2019-20 fiscal year.

A report by the Learning Policy Institute in 2017 found that

With the DPS BA starting salary at $41,320.34, a DPS teacher who rents a two-bedroom apartment in the same city as they work, would have to pay more than 38% of their annual income for housing.

In Colorado, affordable housing is typically defined as paying no more than 30% of gross income for housing including utilities. Because of how the DPS base salary system is currently set up, many teachers don’t have access to affordable housing.

The prohibitively high housing costs also effect where students and their families are able to live. Colorado has the third highest number of families with children who are experiencing houselessness. The Colorado Department of Education (CDE) estimates that 21,943 children attending school in Colorado are without permanent homes, with over 2,000 in the Denver Public School system.

With the new teacher contract, many DPS teachers will now be able to afford to live where they work.

Here is our live coverage from the Denver Teacher Strike: 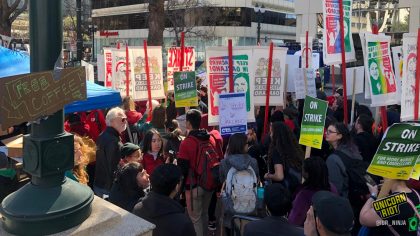 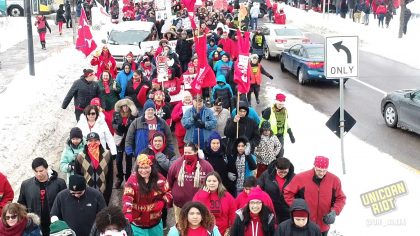