Denver, CO – For at least two years, the city of Denver has been contracting Custom Environmental Services, Inc. (CES) to assist in clearing out camps of people without housing. Unicorn Riot filed Colorado Open Records Act (CORA) requests and received about 50 invoices sent from CES to Denver Public Works (DPW) from September 2017 to September 2018. In those 12 months, Denver paid CES nearly $400,000 to, in the invoices’ language, “mobilize to site to continue clean up” and “mobilize to storage facility for homeless to claim belongings.”

Since the passage of the Unauthorized Camping Ordinance in May 2012 by Denver City Council, the city has been criminalizing the ability of people without housing to survive. The Ordinance states that it is illegal for anyone to shelter themselves from the elements while residing or dwelling on public or private property, without appropriate written permission.

People who sleep outside are woken up and asked to “move along” by police officers most nights, however DPW and CES become engaged when there are dozens of people in one area that the city wants to evict. During these big sweeps, the police and the Denver Sheriff’s Department are also involved.

Unicorn Riot sent CORA requests not only to DPW, but also to the Denver Police Department (DPD) and the Denver Sheriff’s Department (DSD) to find out how much money the city spends on paying officers and sheriffs to assist in sweeps. The DPD did not complete our request, and instead Mary Dulacki, the Department of Public Safety Records Administrator, responded with:

“We could review emails referencing the terms you identified but that review would not likely produce many records relevant to your request.”

After reiterating that we wanted to receive any and all relevant records, Dulacki replied by dancing around the request:

“I confirmed that the Denver Police Department Homeless Outreach Team (HOT) does not utilize ‘inmate labor’ for clean-ups. Additionally, the HOT does not track its hours spent on clean-ups, as opposed to other activities.”

DPD didn’t comply with our records requests, so we were unable to find out the exact amount of money the city pays officers to assist in sweeps, however according to the graph below, the average hourly wage for police and sheriff’s patrol officers in Denver, Aurora and Broomfield, CO is $37.86.

Over the past month, Denver Homeless Out Loud (DHOL), a local advocacy group which works with and for people who experience homelessness, has been reporting that police have had a 24/7 presence at the cross streets of Park Avenue West and Lawrence Street. In using the average hourly wage in the above graph, Unicorn Riot calculated that the city is paying $25,442 for just one officer to be working those hours.

The sheriff’s department never acknowledged our records request, but sheriffs and inmates are present at many of the sweeps as evidenced in the photographs below.

On November 21, 2018, DHOL hosted a rally outside Denver’s City Hall to call for an end to the sweeps, which over the past month have been “at a point of insanity,” according to DHOL member Terese Howard.

“It is at a point where if you are for a second laying down somewhere near the Rescue Mission or the triangle with a sleeping bag, then you are told to move. You are told you cannot cover yourself with that blanket within seconds. There’s cops parked at that area, multiple cops, 24/7 for the past 3 1/2 weeks.” – Terese Howard

Unicorn Riot was live at the rally, which you can watch in full below:

During the day on November 21 before the rally, DHOL sent a letter to Denver’s Mayor Michael Hancock and Denver City Council, which was endorsed by thirteen other organizations including Interfaith Alliance of Colorado, Colorado Cross Disability Coalition, and the ACLU of Colorado.

The letter states that the 14 undersigned organizations call on Denver to immediately:

On top of the lawsuit, for four years in a row, DHOL has been the organizational sponsor for the Homeless Bill of Rights (HBR) in the Colorado legislature. If passed, HBR would eliminate the Ordinance, but it has yet to be successful.

After HBR failed in March 2018 for the fourth time, DHOL switched their focus and decided to work toward putting an initiative on the local ballot for May 2019. The new tactic proved favorable when their initiative Right to Survive was officially added to the ballot on October 22, 2018.

Since DHOL became an organization in 2012 as a response to the passage of the ordinance, its members and allies have been advocating for truly affordable and accessible housing, as well as for city officials to treat unhoused residents with dignity and respect.

Watch our video about the village below:

The cost of one tiny home, which can house 1-2 people, is about $8,500. For the amount of money the city spent on paying Custom Environmental Services for assisting in the sweeps, nearly 50 tiny homes could have been built and could currently be housing 50-100 people.

However, Denver officials have been focused on creating a “world-class city” (PDF) for people who can afford to buy a $400,000 condo or pay more than $1,300 a month for a one-bedroom apartment.

Before the Unauthorized Camping Ordinance was passed, Mayor Hancock, who had just been sworn into office in July 2011, spoke openly about supporting a camping ban:

“We only have one downtown, we cannot afford to lose our city core. If people don’t feel safe going downtown, that is a threat to the very vitality of our downtown and our city. I was surprised as anyone to learn that you can sleep on the mall. Why is that the case?”

This rhetoric of dangerous homeless people was also spread by another person in power named Tami Door, president and chief executive of the Downtown Denver Partnership, who told the Denver Post in 2011 that:

“There’s no question that we have serious concerns over the increased numbers of individuals on the streets. There are behaviors that aren’t acceptable and we need to explore ways in which we address these.”

During the rally on November 21, 2018, a unhoused Denver resident named Frederick Jackson called out the city for the stigmatization he faces everyday:

“[The police] say homeless people are committing all the crime in town and this is the reason [the police] can do this… The other day an officer came to wake us up, and I said, I told him, I said, ‘It’s 3 o’clock in the morning, this is the time where everybody’s getting their stuff robbed, drunk people are driving home, it’s Friday night, and you’re out here waking me up. It’s impossible for an asleep man to commit crime.’ And the officer said, ‘Well your sleeping is a crime.’– Frederick Jackson

There is a long history (PDF) in the United States of state governments criminalizing people for not having money and for being seen as undesirable. In Chicago in 1881, an “ugly law” was passed which stated that:

“No person who is diseased, maimed, mutilated or in any way deformed so as to be an unsightly or disgusting object or improper person to be allowed in or on the public ways or other public places in this city, or shall therein or thereon expose himself to public view, under a penalty of not less than one dollar nor more than fifty dollars for each offense.”

In 1937 in California, an “anti-Okie” law was passed, which made it illegal to “bring or assist in bringing” extremely poor people into the state.

Even the first eugenics-based compulsory sterilization law in the world, which was passed in 1907 in the state of Indiana, was widely accepted and celebrated due to its goal of ridding society of undesirables.

DHOL and their allies believe that laws such as the Unauthorized Camping Ordinance are just new forms of these old discriminatory laws.

“The Mayor tries to justify the sweeps as a ‘health and safety measure.’ That is absolutely wrong. That is a lie and we have to call out that lie because it is the exact opposite. The health and safety of folks on the streets is put at far greater risk by pushing people to the far ends of the river, by taking people’s survival gear.” – Terese Howard

Unicorn Riot will continue to provide coverage pertaining to the issues of houselessness and the housing crisis in Denver. 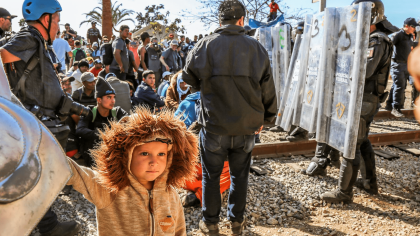 Tear Gas at Border as Asylum Seekers Attempt to Cross 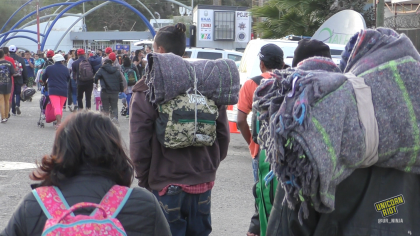