Minneapolis, MN – A donation of over 200 plywood protest murals makes the “Save the Boards to Memorialize the Movement” project the largest art collection of its kind. During the height of the civil unrest in the city, following the death of George Floyd, businesses used sheets of plywood to protect their windows from being broken and prevent looters from breaking in. The plywood served as a blank canvas for artists who covered the pale brown boards with art that expressed grief, outrage and hope.

Once the unrest was quelled and business owners felt comfortable removing the plywood from their establishments, controversy filled the community as people shared different viewpoints about whom the art belonged to. Some people believed credible institutions such as the Smithsonian or Minneapolis Institute of Art would be best suited to take custody, while many among the Black community resisted the idea of the art being taken by white-owned institutions.

Although Black community leaders and artists agreed they should retain ownership of the art, there was no organized effort to achieve their shared goal — so Leesa Kelly and Kenda Zellner-Smith each took initiative and started collecting.

Kenda’s Save the Boards and Leesa’s Memorialize the Movement were both about a month into their efforts before the two women met and decided to merge their projects. The duo’s efforts are known now as Save the Boards to Memorialize the Movement, a project focused on retaining community ownership of the art and keeping it accessible to the Black community. Several community partners have signed on to support this project including the Minnesota African American Heritage Museum and Gallery, the only Black-owned museum Statewide.

Prior to the donation from Whittier Alliance on Saturday, October 24, Leesa and Kenda counted more than 300 boards in their 1,000-square-foot storage unit in Minneapolis. The donation from Whittier Alliance, a Minneapolis non-profit, was much larger than they originally anticipated adding an extra 210 boards to their collection. Moving the boards from Lake Street where they were stored to the duo’s Northeast storage unit took over four hours with the help of more than a dozen volunteers. Now the pair says their collection totals 537 boards.

Although they consider it a victory to have successfully saved so many boards, the achievement is bittersweet; both women have the energy for much more, but their efforts are limited by a lack of storage space.

“We want to keep collecting and preserving more boards and we have offers from other people who want to donate their collections to us, but we do not have any more space in our storage. We have looked at getting another storage unit but we currently do not have the funding to take that on.“

The organic art conservation movement has been primarily self-funded with some support from community donations, but both Leesa and Kenda say they have had to do a lot with a little.

While they want to continue collecting the boards, they’re concerned that they will have to scale back their efforts either to wait until they can afford to purchase more storage space or until they find someone with space to donate to the effort.

Leesa and Kenda say their priority is to properly protect and preserve all of the boards, so that the art can be safely preserved and maintained within the Black community. A part of their preservation efforts includes creating a digital archive of every board by putting it through a 3D scanner. They hope to digitally archive all the boards they’ve collected, plus the boards that have been collected by others.

When asked about the plywood murals that are still on display, Kenda says the situation is problematic because the plywood material is not designed to withstand the wet conditions posed by Minnesota winter.

“We are encouraging business owners to take down the plywood murals over winter months so that the art is not destroyed.“

Kenda Zellner-Smith, founder of Save The Boards

The Caldwells: Father-Son Duo Team Up on a Portion of Historic Minneapolis Mural

The duo is launching what they call “Phase 2” where they will focus their efforts on businesses who have still not taken down their protest plywood murals. After building those relationships they hope to convince business owners that their historic art will be damaged if its not taken down. In its place, for those concerned about keeping their businesses protected, Leesa and Kenda will provide blank sheets of plywood at no cost.

When asked how community can get involved Leesa and Kenda are always looking for volunteers or folks can support their efforts by donating to their GoFundMe campaign or purchasing items on their Amazon wishlist.

Unrest in Philly After Cops Shoot and Kill 27-Year-Old 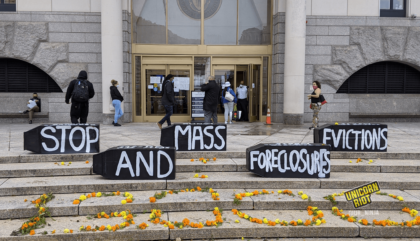