Minneapolis, MN – Nearly two months after the brutal police killing of George Floyd, a massive ‘Black Lives Matter’ mural was painted in North Minneapolis on the street in front of Minnesota’s only Black History Museum. More than a dozen local artists, some with the help of their friends and family, came together to paint the 16 letters in the statement “Black Lives Matter“.

Unicorn Riot was live as the mural was being finished on July 18, 2020. We spoke to four of the artists: Charles and Kenneth Caldwell; DeSean Hollie; and seangarrison (Sean G Phillips). We also interviewed Tina Burnside, the co-founder of the Minnesota African American Heritage Museum and Gallery (MAAHMG). See the video below.

The mural starts in front of the museum on Plymouth and Penn Avenue and goes east on Plymouth towards the Minneapolis 4th Police Precinct.

“This is a historic public art event to support the fight against systemic racism and police brutality against Black people in this country […] The museum also affirms that Black lives are sacred and urges a stop to the violence in the community.” —  Tina Burnside, curator & co-founder, Minnesota African American Heritage Museum & Gallery

The artists who participated and the letters they produced are as follows:

To paint the mural, Plymouth Avenue was blocked off for the day until 5 p.m. when the artists stopped working. Less than an hour later, the streets re-opened to motor traffic.

Voice of Culture Drum + Dance performed, providing a backdrop of African drumming and dancing, while a slew of volunteers helped to organize and carry out the event.

Each of the artists we spoke with said they felt positively about being involved with the production of the mural. Artist seangarrison said he was “honored to be a part of it.”

“For me, since I was out there and about doing the whole uprising and just watching all that beautiful action, to see people out there was inspiring for me as an old head, I was like, okay, these young folks got it. And so it’s our job […] to keep young brothers and sisters spirited.” — seangarrison (Sean G Phillips), artist

Since the murder of George Floyd, there has been an unprecedented amount of resistance art in the Twin Cities.

Painted murals and graffiti pieces adorned boarded-up storefronts in Minneapolis and Saint Paul for months and some still remain. MAAHMG is working with Leesa Kelly to preserve them.

This upcoming week, MAAHMG is planning to re-open after being closed for months from COVID-19. The space will feature media, artwork, and other remnants of the George Floyd uprising, including a Unicorn Riot exhibit featuring a video from the uprising. 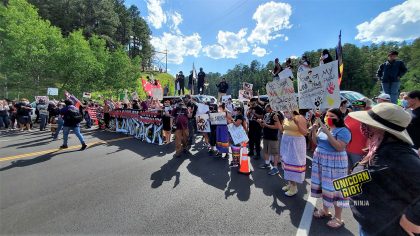 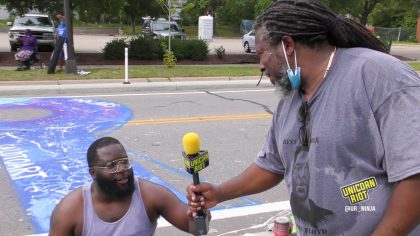 The Caldwells: Father-Son Duo Team Up on a Portion of Historic Minneapolis Mural