Keystone, SD – Thousands of Trump supporters, as well as counter-protesters, are expected to converge today in a small town in South Dakota’s Black Hills for the Trump/Pence 2020 rally scheduled to take place this afternoon. Keystone is near Mount Rushmore, a monument to Presidents Washington, Jefferson, T. Roosevelt, and Lincoln which is visited by over 2 million tourists annually.

Watch our live stream from South Dakota on July 3:

In the 1920s, South Dakota state historian Doane Robinson sought to promote tourism in the state. He got the idea to build a national monument, and to help accomplish the task he hired sculptor Gutzon Borglum, who had recently helped construct a memorial to Confederate leaders in the state of Georgia.

Gutzon was a member of the Ku Klux Klan. Some of the funding for the Mount Rushmore project came from the KKK.

The mountain that was chosen for the site of the monument is known as “The Six Grandfathers” (Tĥuŋkášila Šákpe) by Lakota peoples, named after the Earth, the Sky, and the four directions.

It is a sacred place, and the land around it is unceded Indigenous territory. The seven tribes of the Great Sioux Nation never agreed to or signed away their rights to this land; the Fort Laramie treaty in 1868, which the tribes did sign, guaranteed them “undisturbed use and occupation” of the land on which the Six Grandfathers, or Mount Rushmore, is on.

Just nine years later, the United States government broke the treaty and violently seized the Black Hills (Pahá Sápa in Lakota) in order to mine for gold and other resources. Many attempts to hold the U.S. government accountable have been tried, including a 1970 protest where 23 Indigenous activists climbed on top of the monument.

In 1980 the U.S. Supreme Court finally agreed with the Great Sioux Nation, ruling that the land was illegally taken, and they granted the Nation $102 million in a trust.

The trust has grown to over $1 billion in worth, but the money has not been collected. The tribes refuse the money because it would equate to a sales transaction, one that they never consented to.

Meanwhile, thousands gather in Keystone, SD to celebrate Independence Day and hear from President Trump and Vice President Pence. Though a fireworks display has not happened at the monument in over a decade due to forest fire concerns, and although there is presently a ban on camp fires in the nearby National Forests, there are fireworks planned for this weekend.

Governor Kristi Noem of South Dakota has stated that on her watch, nothing bad will happen to the monument.

Continue to follow Unicorn Riot on social media for updates from South Dakota.

Update July 4, 11:45 a.m.: an earlier version of this article incorrectly stated “nine tribes” of the Great Sioux Nation. There are seven* major divisions of the Očéti Šakówiŋ, as noted on USDakotaWar.org and the Akta Lakota Museum & Cultural Center:

Additionally, there are seven* bands within the Lakota: 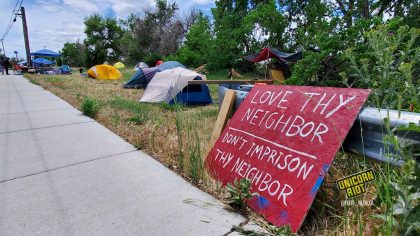 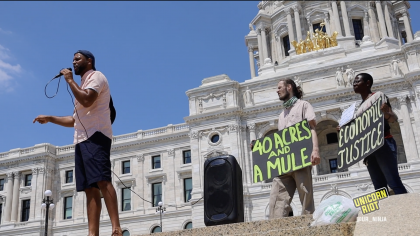