Aurora, CO — On the morning of June 30, 2020, Pablo Mackleen Grijalva’s lawyer tried to contact him at the GEO Group’s ICE jail where he is detained, but to her shock, the officer on the phone told her he was not there. She immediately called Kesha Davalos Grijalva, Mackleen Grijalva’s wife, and told her what the officer said. After calling the jail a second time, an officer confirmed that Mackleen Grijalva was going to be deported that day with others in the weekly deportation van.

When Davalos Grijalva heard the deportation news, she called her friends and family and a group of them decided to drive to the small airport near the Denver International Airport (DIA) where deportation planes depart. About 20 people gathered on 80th Ave, which is a public road, to protest the deportation.

Mackleen Grijalva has lived inside the Aurora immigration jail for over six months, and he finally had a hearing on June 9 about his deportation case. Although his lawyer outlined during his hearing that his wife and six-year-old daughter would suffer in many ways if he was deported, and testimony from Davalos Grijalv corroborated those facts, the judge ordered him deported.

However, after an immigration judge orders someone deported, it does not always happen right away. In fact, Mackleen Grijalva, and most other immigrants ordered deported, have the right to tell the judge at their deportation hearing that they intend to appeal. Once a deportation is ordered, immigrants have 30 days to file an appeal to the Bureau of Immigration Appeals.

Although Mackleen Grijalva explained that he was appealing the judge’s decision, the officers at the Aurora immigration jail took him out of his pod, packed up his belongings, and placed him in a solitary cell.

It wasn’t until after telling Mackleen Grijalva’s lawyer that he was not at the facility, that an officer called the judge who made the deportation order to check on the case. The judge told the officer that Mackleen Grijalva was appealing, and therefore, could not be deported.

Unicorn Riot’s local reporter arrived on the scene near DIA around 12:15 pm, and when she was walking toward 80th Ave, Denver PD Officer Brian Wallace, part of the DIA Bomb Dog Unit, approached her and told her she needed to wait. He said he needed to call their Public Information Officer (PIO).

Our reporter continued to question why she was being told she could not do her job and report on an event. She asked what would happen if she walked any farther, and Officer Wallace said she may be arrested.

#DenverPolice are denying one of our reporters from entering an area of the #Denver International Airport where a demonstration is happening to protest the unlawful deportation of Pablo who was detained at the #Aurora #GeoGroup #ICE facility pic.twitter.com/3WX0p7yoiG

We just found out that Pablo Mackleen Grijalva is still detained at the #Aurora #GeoGroup‘s #ICE facility, which means the officers at the facility lied to his lawyer this morning. The protesters who mobilized to where the deportation planes depart from #DIA are relieved.

Around 1:00 pm, Davalos Grijalva decided to try to call her husband one last time in the hopes he wasn’t on the deportation plane, and miraculously he answered.

He then explained to her everything that happened and how because he asserted his rights over and over, the officers gave in and called the judge.

“This facility, this place, and this whole system is fucked up. I can’t even imagine for those who have been forced to sign the [deportation] papers, and I don’t know what, I can’t even imagine what they do to them. I really can’t and I was just thinking, just thinking the worst. Thinking that they forced him, they probably, like, I don’t know, beat him up or something to make him sign the paper.” — Kesha Davalos Grijalva

Davalos Grijalva and dozens of others have been camping outside the Aurora immigration jail for over a month demanding for the release of everyone inside, including her husband.

Our local reporter visited the encampment the day after it was set-up and interviewed Davalos Grijalva and her daughter:

As of June 24, there were a total of 20 reported Covid-19 cases in the detainee population at the Aurora facility, including 4 new cases in the week leading up to the 24th.

The camp-out is in direct response to an announcement by the Tri-County Health Department on May 21 stating that the Aurora facility had detainees who tested positive for COVID-19.

With mobilizations based in racial justice and police accountability and abolition continuing to grow and gain support nationwide, it may get harder and harder for government officials to flea from being held accountable. 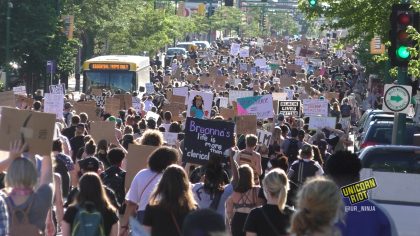 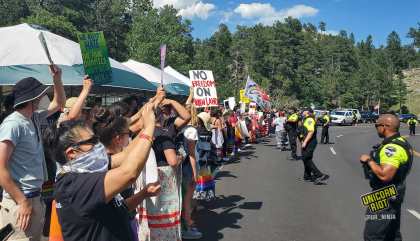