Charlottesville, VA – This week marks the official start to the trial in ‘Sines v. Kessler‘, the federal civil rights lawsuit filed against organizers of the violent and deadly August 2017 ‘Unite The Right’ rally. The case was filed on behalf of 10 plaintiffs injured during violent assaults by white supremacists who gathered in the central Virginia town on August 11 and 12, 2017, including 7 survivors of the car attack in which neo-nazi James Alex Fields killed Charlottesville activist Heather Heyer after driving into anti-racist protesters. With a full jury finally empaneled after 2.5 days of laborious proceedings, opening arguments are set to begin the morning of Thursday, October 28. Trial is expected to last about a month, with a scheduled end date of Friday, November 19.

Jury selection in the trial finished on the third anniversary of the 2018 Tree of Life synagogue shooting in Pittsburgh, PA, where a neo-nazi gunman tied to Unite The Right killed 11 Jewish worshippers during Shabbat services.

The lawsuit, brought by attorneys and law firms working with the nonprofit Integrity First for America (IFA), alleges that a laundry list of individuals and groups behind the Unite The Right event conspired to travel to Charlottesville to commit racially motivated violence in violation of the 1871 Ku Klux Klan Act. A large amount of digital evidence in the case, including planning meetings and Discord chats leaked by Unicorn Riot, show rally organizers prepared for violence ahead of time, encouraging each other to brutalize anti-racist protesters and Black and Jewish people.

The case is being overseen by Judge Norman K. Moon, a Bill Clinton appointee and senior judge for the Western District of Virginia. The case presents several logistical challenges given the large number of defendants, many of whom do not get along or choose the same legal strategies. (15 individuals and 11 organizations are named in the final version of the case.) Defendants Christopher Cantwell and Richard Spencer, both high-profile personalities in the once-ascendant alt-right movement, are representing themselves Pro Se.

A jury of twelve Western District residents were finally selected for the trial on Wednesday afternoon, after nearly three days of jury selection or Voir dire. (The federal trial requirement for such a trial is 7, so up to 5 jurors could get eliminated if issues arise.) By this reporter’s count, the jury is made up of 5 white men, 2 white women, 3 Black men and 2 Black women. (Official information on juror demographics has not yet been released by the court and the courthouse media room provides a single video monitor with limited resolution to see those in the courtroom.)

During jury selection the neo-nazi defendants were keen to hone in on potential jurors view about ‘Antifa’, questioning some jurors about their views on fascism, politics, and where they got their news from.

The white supremacist defendants tried to prevent several Black jurors from getting impaneled, with Richard Spencer claiming a Black woman “doesn’t want to” serve on the jury, and questioning the cognitive abilities of an older Black man selected for jury duty.

Many jurors were dismissed by Judge Moon after stating they could not be impartial in the case, calling the white supremacist rally organizers “terrorists“, “evil“, and “heinous.” One juror who was struck said her son had been taught in school by Deandre Harris. Harris is the Black man who was brutally beaten by Unite The Right rally attendees in what became a high-profile criminal case involving members of the League of the South, the Traditionalist Worker Party and the Three Percenters.

Several of those interviewed from the jury pool appeared more aligned with the defendants, denouncing anti-fascists and Black Lives Matter and saying they were mostly concerned about racism “against white people.”

Outside the courthouse, local residents who have followed the case closely listened to the proceedings via their phones. As jurors who were openly disturbed by the actions of the white supremacists repeatedly got dismissed by Moon, it highlighted the contradictory nature of the jury trial system and its focus on finding detached panel members.

The lengthy jury questionnaire for the trial quizzed each prospective juror’s tendency to be ‘favorable’ or ‘unfavorable’ towards things like ‘Antifa’ and Black Lives Matter.

Rosia Parker, an organizer and former member of the Charlottesville Police Civilian Review Board, said, “I feel as [Moon]’s asking these questions, he’s being biased a little bit. […] It sounds like there are biased questions … to ask the jury, and you’re badgering some of the ones that can’t be on the jury. With this trial it’s like he’s more […] on the defendant’s side. … As usual they already have things decided before things have even progressed.”

Larycia Hawkins, a professor in the Politics and Religious Studies departments at the University of Virginia, highlighted the “dependent variable” of the jury system:

“Statistically we know what that is called, it’s choosing on the dependent variable… It’s selection bias, period. So you can have a jury of your peers as citizens, as people in a public square, we’re not devoid of emotions and thoughts about our public lives. The whole point of Black Lives Matter is Black bodies in public are treated fairly differently than white bodies in public. So we’re making a point about the fact that justice is not blind. Sure, a judge should give jury instructions, the attorneys should seek to select jurors who are going to act in their role, as responsible citizens, but that should not require folks to be devoid of some level of emotion.

During the Voir dire process, medical workers such as nurses and home care aides called in for jury duty were generally quickly released on the grounds they were essential workers who couldn’t be replaced for four weeks. Other jurors who were cut said they simply couldn’t afford to miss four weeks of work, highlighting the mundanely classist nature of the U.S. trial system. Many prospective jurors said either they were key employees – like one who was the only emergency generator technician at a business – or that their small companies faced serious harm from losing four weeks to jury duty. Still others had fear of catching COVID in the confines of the courthouse, had serious medical issues, or were in recovery from catching coronavirus themselves.

On Wednesday after jury selection ended, Judge Moon heard a ‘Batson motion’ challenge, where the plaintiffs alleged that the defense had used a preemptory strike to remove a juror on the basis of his being Black. The defense argued that the juror, who defendant Cantwell described as an “anti-white race nut,” was too favorable towards Black Lives Matter and they felt he was lying in order to get on the jury. Over the objections of the plaintiffs, Judge Moon denied the Batson motion and the Black juror in question will stay off the jury.

During the second day of jury selection on Tuesday, the court learned that William Edward Rebrook, defense counsel for the National Socialist Movement (NSM), former NSM leader Jeff Schoep and the Nationalist Front, was missing and reportedly in the emergency room. By the end of court on Wednesday, it was not clear if Rebrook, whose clients were being temporarily covered by other defense counsel, could return to court for the start of the trial. 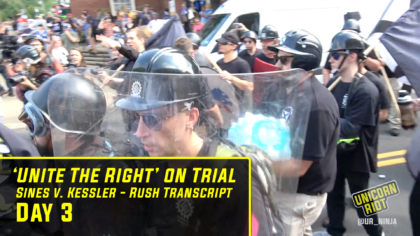 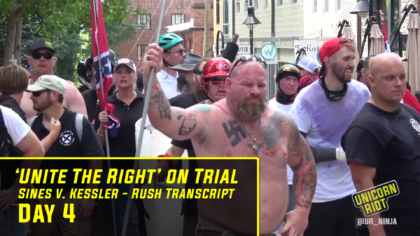