Southern Arizona – Starting Tuesday, along I-10 in Southern Arizona, observant commuters may have noticed a peculiar uptick in the interstate’s westbound traffic — dozens, maybe even hundreds, of empty shipping containers were hauled one-by-one down the highway.

From unincorporated land in Cochise County to the Arizona State Prison Complex in the southern reaches of Tucson, this curious cavalcade marked what may be the next phase of the monthslong saga that has resulted in the destruction of miles of Southern Arizona wilderness and has cost the State of Arizona over $108 million dollars for what amounts to four miles of discarded scrap metal.

Since the project began in late October, workers have feverishly placed hundreds of shipping containers along the Arizona/Sonora border in Southern Cochise County, forming a precarious barrier and a gash through this otherwise pristine stretch of encinal or oak grassland.

Workers have been staging the containers in an unincorporated area of Cochise County, halfway between Whetstone and Huachuca City off Arizona State Highway 90 (31°40’21.2″N 110°20’58.6″W). The 88-acre plot of land is owned by the James and Jennifer Douglass Family Revocable Trust, according to Cochise County land records.

Although Governor Doug Ducey’s office did not respond to a request for comment about the site, the aggregation of hundreds of shipping containers at this location in the midst of the massive operation along the border strongly suggests that the site is linked to the project. The site lies 20 miles south of I-10, making it a convenient location for amassing the containers before moving them to the border.

On Wednesday, Dec. 14, the U.S. Department of Justice filed a lawsuit in federal court against the State of Arizona over the shipping containers, which it says “violate federal law, present serious public safety risks and environmental harms, and interfere with federal agencies’ ability to carry out their official duties.” This lawsuit marks the first significant response by federal authorities to the project.

In an official response to the DOJ’s notice of intent to file legal action submitted on Dec. 12, Governor Ducey’s office announced on Dec. 13 that “construction” of the shipping container barrier “has ceased,” which appears to correspond with the mass exodus of shipping containers from the storage site.

Satellite images of the area, which lies just north of Ronald Reagan Parkway, show undeveloped desert land, yucca and small mesquites, without a shipping container in sight — the Google Earth images are dated May 2019 indicating that the land was recently cleared for the thousands of containers purchased by the State of Arizona to dump at the U.S.-Mexico border.

Drone footage shows an estimated 900 shipping containers double and single stacked, waiting to be added to the parade of surplus from global trade that Arizona Governor Doug Ducey was trying to leave behind as his legacy before his term ends in January. The containers have transformed a jewel of the Sonoran Desert into a junk yard in a matter of weeks.

According to the State of Arizona’s contract with AshBritt, the private disaster management company awarded the contract for the project, each twenty foot shipping container cost Arizona taxpayers $5,700. This means that the 900 containers staged at the site on Ronald Reagan Parkway carry a price tag of more than $5.1 million, assuming that they are all twenty foot containers, rather than forty foot containers, which are even more expensive. This figure does not include the thousands of additional containers AshBritt has dumped along the border, both in Cochise County and near Yuma, Arizona, nor the costs of the machinery and labor to do so.

With the U.S. government unwilling or powerless to take any direct action on the ground to stop the destruction, which runs afoul of federal law and trespasses on a strip of territory that is ultimately subject to the authority of the International Boundary and Water Commission (IBWC), halting the onslaught has become an urgent necessity for dozens of activists and locals. Beginning November 29, when protestors started blockading the project’s advance, work slowed and, by December 6, halted altogether.

It is unclear whether the containers will be stored indefinitely at the prison or whether they will be used by the prison. Neither Governor Ducey’s office nor the Arizona Department of Corrections responded to requests for comment.

A truck hauls a shipping container onto the AZ State Prison Complex property on Dec. 13. Photos by Ryan Fatica.

Shortly before he started dropping containers into the wilderness in late October, Governor Ducey filed a lawsuit in federal court alleging that a crisis was occurring along the border and that the federal government was negligent in its duty to respond. Part of that lawsuit draws upon language in the U.S. Constitution allowing states to act without congressional authority in the event of an “invasion.”

The San Rafael Valley not being a particularly active corridor for human migration and the dubious efficacy of the easily scaled containers as meaningful barriers seem to have been of little importance to the administration.

On November 2, the Center for Biological Diversity filed a Motion to Intervene in the case, claiming that it had an interest in the case due to its responsibility to protect jaguar and ocelot habitat in the area.

While those in power continue to argue with each other through the courts, a small group of dedicated activists and members of the local community continue to put their bodies in the path of the machines. “‘We the People’ will continue our presence at the border until the federal government stops the destruction and removes the containers,” some blockaders wrote in a press release Wednesday.

“We speak for the land that has been callously unearthed, the trees that have been uprooted and mowed down. For if we don’t, who will?”

Blockaders of the shipping container wall

Featured image photographed by (and licensed to) David Taylor. 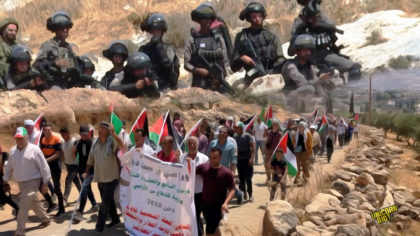 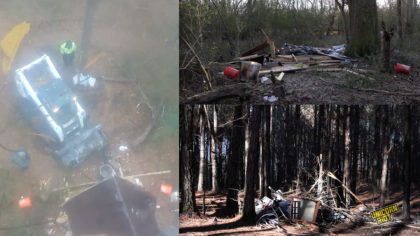