Atlanta, GA – On December 13 and 14, 2022, SWAT teams and other armed police officers from eight different federal, state, county, and city police agencies conducted a raid on those camping out in the Atlanta forest in hopes of preventing the construction of a 85-acre police training facility that opponents have dubbed “Cop City.”

During the raid, police shot tear gas and plastic bullets and forced people out of the forest at gunpoint. Police in Bobcats and other heavy equipment destroyed treehouses, a communal kitchen, and other infrastructure built by those dedicated to the defense of the forest.

An encampment structure stands tall before the raid (left). The structure was completely demolished and removed during the raid (right). Credit: Sasha Tycko

By the end of the two-day operation, a total of 12 people were arrested, according to police. At least six of those have been charged with a host of felonies, including state-level domestic terrorism charges, according to the Atlanta Solidarity Fund.

On Tuesday, December 27, all six arrestees charged with domestic terrorism were granted bail totaling $51,000 with amounts per defendant ranging from $6,000 to $13,500. The six were also ordered to report to “pretrial services” within 48 hours, to refrain from contact with their codefendants, and to refrain from “contact with Defend Atlanta Forest on social media.”

The Atlanta Solidarity Fund, an Atlanta-based bail fund, posted on social media their intention to bail the six out as soon as possible.

“The ‘domestic terrorism’ charges these protesters are facing are utterly baseless,” the group wrote on Twitter following the hearing. “Legal experts including the ACLU have warned prosecutors that there is no basis for such a case. We have been assembling a legal team to defend them every step of the way through the legal process.”

At a hearing on December 15, 2022, Magistrate Judge Claire Jason denied bond to five of the arrestees charged with felonies.

“Each of you have been charged with domestic terrorism,” Jason said, appearing to read from a document on her screen. “Generally the information that I have on the affidavit of warrant…You did participate in actions of DTAF, Defend the Atlanta Forest, a group that’s been classified by the United States Department of Homeland Security as a domestic violent extremist group.”

Those involved in the movement to defend the forest deny that the group Defend the Atlanta Forest even exists. Writing on Twitter Friday from the handle @DefendATLForest, those running the platform explained, “’Defend the Atlanta Forest’” is the name of a movement and it is also the username of a submission-based social media platform. It is not a group. We do not organize any actions and we don’t know the people who do.”

The Department of Homeland security did not respond to questions from Unicorn Riot regarding the alleged domestic violent extremist group classification. However, arrest warrants and affidavits obtained by the Atlanta Journal-Constitution indicate that those arrested are being charged with domestic terrorism simply due to their affiliation with the “group.” The documents state that the Department of Homeland Security classifies “Defend the Atlanta Forest” as “Domestic Violent Extremists.”

Some affidavits say the offense is “16-10-24 Domestic Terrorism,” however as of 2021 that Georgia state law does not include any references to domestic terrorism — it only pertains to “obstructing or hindering law enforcement.” Another affidavit says the offense is “16-4-10 Domestic Terrorism,” although this appears to be a mistake by prosecutors and the judge, as that section is currently repealed according to Justia.com. However, there is a domestic terrorism statute on the books in Georgia.

The encampments and tree sits within the 380-acre expanse of forest have been constructed, destroyed by police, and reconstructed several times throughout the year. Those living in the trees and supporting them from afar are trying to prevent the razing of the forest and the construction of the Atlanta Police Foundation’s Public Safety Training Center, currently scheduled to open in late 2023.

The facility carries a price tag of $90 million for its initial phase. In September 2021, Atlanta’s City Council approved a proposal to construct the facility within a huge swath of forested land in unincorporated DeKalb county southeast of Atlanta, some of which is owned by the City of Atlanta.

​​Other sections of the forest are also in danger of destruction. Last year, film company executive Ryan Milsap, former owner of Blackhall Studios (recently rebranded Shadowbox Studios), was given forty acres of forested land called Intrenchment Creek Park just west of the planned police facility in a controversial land swap. Opponents of Milsap responded to an escalation he made on July 30, 2022 by setting a work truck on fire.

Milsap has stated publicly that he plans to raze the forest to build 1.2 million square feet of sound stage, which would make it the largest film studio in the state.

“I want to be clear, the people that the police are attacking with plastic bullets with chemical weapons, as recently as yesterday, these people were not involved in threatening anybody,” said Marlon Kautz of the Atlanta Solidarity Fund at a press conference on Wednesday.

“They were not involved in endangering anybody. They were sitting passively in trees trying to express a political position. And for sitting in trees, trying to conduct a non-violent protest, they were attacked by police, arguably tortured with chemical weapons.”

On Tuesday night, in the midst of the raid, activists called for a protest at the Dekalb County Jail where those who had already been arrested were held. They beat drums, shouted, and chanted so that those held behind the jail’s walls could hear them. In response, detainees in the jail banged on windows, waved, and even lit a fire.

This is not the first time people have been arrested and charged with crimes for protesting against the project, but it is the first time authorities have charged protestors with domestic terrorism. The first arrests associated with the movement came in September 2021 when activists were protesting outside the homes of several City Council members in the midst of the council’s vote to approve the Cop City project. The protests were held at City Council members’ homes because the meeting took place remotely.

A Trend Continues: Leftist Activists Get Pinned with Terrorism Charges

There is a longstanding precedent for terrorism charges being used against animal rights and environmental activists. According to a 2019 study by The Intercept, of the 70 federal prosecutions of animal and environmental activists they identified, the government sought terrorism enhancements in 20. Overall, the use of terrorism charges has risen dramatically in recent years, peaking in 2020. The rate of federal terrorism prosecutions has increased 388% since 2017.

Watch our mini documentary – Defending the Atlanta Forest: Behind the Movement to Stop Cop City

Although the FBI is involved in the repression of the movement to save the forest, those arrested Tuesday face state-level terrorism charges, brought by the Georgia Bureau of Investigation (GBI).

However, activists associated with the campaign to save the forest have raised doubts over whether these charges will actually stick.

“The GBI knows that these charges will not hold up in court, and they are not intended to: the point is to raise the stakes of protesting,” said a spokesperson for the Defend the Atlanta Forest campaign in a press release.

“Their goal is to create a chilling effect across the city, scaring off anyone concerned about police militarization and the climate crisis from taking action.”

Despite the rhetoric currently being wielded by the GBI and other law enforcement agencies, which seek to portray the movement to defend the forest as a militant fringe group, the Cop City project remains wildly unpopular among a broad segment of Atlantans, including those who will be forced to live closest to it. Even a local preschool has gotten involved in the fight to save the forest.

A sukkah (a traditional Jewish hut) at the encampment was destroyed during the raid. Credit: Sasha Tycko

Activists say police are escalating the level of violence and repression they are using against the movement as its success and popularity grows. Kautz, of the Atlanta Solidarity Fund, told reporters Wednesday:

“When the Stop Cop City movement began, police tried to use intimidation to dissuade activists. And when that didn’t work, they began making baseless arrests, which the Atlanta Solidarity Fund has documented and is providing legal support to defend people in those cases.”

Kautz continued: “When the baseless arrests failed to discourage people from speaking out about the problems that they saw with Cop City, we got to where we are now, with the police using open brutality to try to suppress them.”

“Are we going to end up in a situation where the police are murdering protesters in order to advance, not public safety, but their particular political agenda?”

In June 2022, Atlanta Police officers were caught justifying the use of lethal force against protestors who used molotov cocktails to defend themselves and the forest in the midst of a police raid. (Although no forest defenders were charged during the raid for molotovs or incendiary devices.)

Despite the harsh repression, activists have pointed out that the project they are trying to stop holds the potential to unleash even more police violence on their communities.

“At least five people were arrested, two were forcibly removed from their treesits at gunpoint and many more were tortured with chemical weapons,” said Jasmine Burnett of Community Movement Builders, an Atlanta community organizing group at the Wednesday press conference. “This is just a fraction of what our communities will experience if Cop City is built.”

Although the Atlanta Police Foundation has tried to portray the expansion of their powers as an effort to protect poor and working class communities and communities of color, those opposing the project say the police will never work to combat the real issues they’re facing.

“We recognize that cop city is not being constructed so that the police can learn tactics to go after the corporations that are polluting our neighborhoods,” said Burnett, “or practicing wage theft against low wage workers, or go against the developers that are exploiting our communities and literally forcing people out of their homes due to rising rents and property taxes.”

“No, they’re going to be learning urban warfare tactics to harass our communities, to surveil us, to prevent us from doing things like gathering here today and letting the public know what’s going on.” 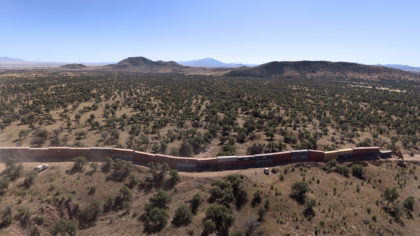 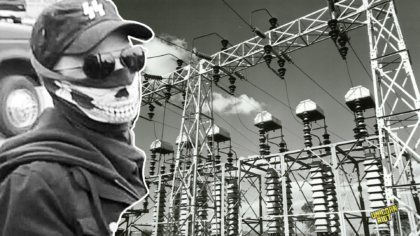 The Far-Right’s Fascination with the U.S. Electric Grid