Thousands of demonstrators filled the streets of Greece’s two largest cities on Nov. 17 to commemorate the 49th anniversary of the uprising in which two dozen students were killed by the military junta at Polytechnic University in Athens. Heavy clashes went on through the night of the memorial protests, with youth using fireworks, homemade bombs, rocks, and other projectiles against riot police who shot a large water cannon and copious amounts of tear gas.

At the 2022 demo in Thessaloniki, Unicorn Riot heard from 89-year-old Theodoros Tellidis, who shared his memories of being exiled by the U.S.-backed military junta of 1967-1974.

After the demo, Unicorn Riot filmed the clashes which also featured hundreds of students trapped in the university buildings and riot police throwing tear gas into the buildings.

For over seven years, from April 21, 1967 to July 23, 1974, Greece was ruled by a military dictatorship imposed by a military coup on April 21, 1967, hence the name “Dictatorship of April 21.” During the seven years of dictatorial rule, power was exercised directly or indirectly by a small group of rulers mostly made up of military colonels behind the coup and largely supported by the United States government along with clandestine Western army units.

While elections had been called for May 28, 1967, a group of army officers led by General Stylianos Pattakos and the colonels Georgios Papadopoulos and Nikolaos Makarezos seized power in the coup d’état on April 21.

Having secured about 100 armored vehicles in the capital area of Athens, the coup plotters moved in the early morning hours and initially seized the Ministry of National Defense. They then implemented a NATO contingency plan, code-named “Plan Prometheus,” resulting in the mobilization of all military units in the Attica region (which contains Athens). The NATO plan was designed for a forced takeover by the military in order to neutralize a communist uprising in the event that Soviet Army forces invaded Greece.

The military coup in ’67 was assisted by the highly secretive CIA and NATO-trained Lochoi Oreinōn Katadromōn (LOK) Mountain Assault Brigade. LOK was part of Operation Gladio, a network organized by the Central Intelligence Agency (CIA) to organize “stay behind” units after World War II. The CIA’s Gladio units were handed over to NATO in 1959. Gladio’s existence was revealed by Italian Prime Minister Giulio Andreotti in 1990; “Nato’s Secret Armies” by Daniele Ganser (PDF, 3MB) and a 1992 BBC documentary covers the infamous network in detail.

The Greek dictatorship of 1967-1974 is internationally regarded as another episode of the Cold War, in the confrontation between the East and West.

This struggle often resulted either in the domination of communist forces, as in Vietnam/Cambodia, or in the military dictatorship of the most extreme pro-Western nationalists as in Chile and Argentina. A more neutral third group, the Non-Aligned Movement, formed in 1961 to collectively rebuff imperialism, U.S. and Soviet influence.

In the case of Greece, as in Spain and Portugal, the military undertook their actions to counter what they saw as a communist danger by restricting political freedoms and establishing dictatorships.

The War Against Political Opponents

Immediately after the enforcement of the regime, thousands of arrests were made, usually at night and without warrants. The majority of those arrested were deported, others were detained in detention centers and some were taken to emergency military tribunals.

The junta, throughout its duration, imposed relentless persecution against its political opponents, especially communists. They re-activated and extended the entire anti-communist legislative framework crafted years before using Emergency Law 509, which was known as Idionymon (or “special illegal act”) in the 1920s and used to target growing communist and anarchist movements.

Some were deported others were exiled. Such places were used in Greece for political repression and re-education torture camps. Many islands, especially in the Aegean, as early as the beginning of the 20th century were places of ektopismos (the exiling of individuals). Thousands were sent to islands during the Metaxes dictatorship of the 1930s.

A larger number of political opponents (tens of thousands) were exiled during the civil war (1946-1949), when new and larger torture camps were created. The measure of deportation remained in force during the early years of the post-civil war period. By 1967 it had become dormant, but during the period of the colonels’ dictatorship it was largely used again. It was finally abolished after the fall of the dictatorship in 1974.

Gyaros, the ‘Island of the Devil’

Gyaros was one of these islands on which exile camps were built. In 1947, the prison of Gyaros was also constructed. All the work was done by the exiled prisoners.

During the dictatorship, thousands of dissidents were again exiled to Gyaros. For the first time, women, even pregnant women, were among them.

Theodoros Tellidis, the elder Unicorn Riot spoke with on Nov. 17, 2022, was exiled by the junta to the Greek island of Gyaros.

In 1967, shortly after the establishment of the dictatorship, reporters from the German magazine Stern flew over Gyaros, took photographs and distributed them internationally. The evidence from Gyaros contributed to the subsequent exclusion of dictatorial Greece from the Council of Europe for human rights abuses.

The Fall of the Dictatorship

The Events at the Polytechnic University

Ιn early 1973, after over six years of dictatorial rule, conflict between the state and students in Athens began to escalate. In an attempt to suppress a rising student movement the military junta implemented Decree 1347, cutting off the deferment of military service for students who were considered a threat to the regime. It achieved the exact opposite of its intended effect, strengthening mass student mobilizations.

Student anger began to grow, resulting in the first occupation of the Law School in February 1973, followed by a second occupation on March 14. Student protests against the new measure continued in the following months. On Tuesday, November 14, 1973, hundreds of students had gathered in the morning at the Law School building and held an assembly and a march in the surrounding area. In the afternoon and while the students had remained on the grounds of the university, the police director and the prosecutor ordered the students to disperse. A coordinating committee was formed and decided at 8:30 p.m. to occupy the university.

From the early hours of the next morning, the support of Athenian society for the students was evident, with food, stationery and medicine being provided to the students. On Thursday, November 16, people remained on the side of the students while barricades began to be set up in the streets. The first clashes with the police were not long in coming and at 7 p.m. the first fatality of the clashes was announced.

At midnight the first tanks appeared and by 1:30 a.m. the head of the army battalion gave the order to leave the building. The students refused and remained, chanting slogans such as “Down with the Junta and the Americans.” At 2:50 a.m. the commander in chief ordered the tank to tear down the gate of the Polytechnic. The military intervention in and around the Polytechnic that continued into the next day injured thousands and killed at least 24 people.

The Polytechnic uprising occurred at a time when Colonel Papadopoulos was propagating a superficial liberalization of the regime. It triggered a series of events that put an abrupt end to these plans. Brigadier General Dimitrios Ioannidis used the uprising as a pretext to restore public order, and organized a coup d’état which overthrew Papadopoulos a week later on November 25, 1973. Ioannidis’ forces surprised Papadopoulos, who was placed under house arrest.

On the day of the new coup, armored vehicles were deployed in the center of the cities. A curfew was announced by radio and stated the army was taking back the reins of power in order to ‘save the principles of the April 21 Revolution.’

Ioannides imposed a harsher dictatorship than that of Papadopoulos. He preferred to work behind the scenes and never held any official position in the junta.

The Coup of July 15 and the Turkish Invasion of Cyprus

The next year on July 15, 1974, on the island of Cyprus, a coup was carried out by the National Guard of Cyprus, the Greek Cyprus Force (ELDYK) and the far right organization EOKA B, at the behest of the Greek Junta. The aim was to overthrow the elected President of the Republic of Cyprus, Archbishop Makarios III, and impose unification with Greece. Cyprus gained independence from the United Kingdom in 1960.

The coup triggered a Turkish military invasion five days after the coup. Turkey claimed that the invasion was a peacekeeping intervention legitimized by Article 4 of the Treaty of Guarantee (Zurich-London Agreements). Within three days, Turkish forces occupied about 3% of the northern part of the island in Operation Attila 1, namely the town of Kyrenia and the surrounding area.

On July 23 a ceasefire was declared and both the Athenian dictatorship and the coup government in Cyprus collapsed.

Two rounds of consultations followed in Geneva between Greece and Turkey. On August 14, the Geneva talks collapsed and Turkey launched a second operation, dubbed Attila II, during which it occupied 36.2% of the island and displaced 120,000 Cypriots, while a total of about 3,000 Greek Cypriots were killed.

The End of the Junta

The period of the military junta ended when the Ioannidis Junta collapsed on July 24, 1974 under the weight of the Turkish invasion of Cyprus.

Right wing politician Constantinos Karamanlis arrived in Athens on July 24 at the invitation of Phaedon Gizikis, the President of the Republic of the Junta, and was sworn in as Prime Minister. Karamanlis formed a Government of National Unity to restore parliamentary democracy.

On July 28, 1975, the so-called Trial of the Junta, i.e. the trial of the three coup plotters Stylianos Pattakos, Georgios Papadopoulos and Nikolaos Makarezos and their accomplices, began. They were charged with various crimes during the dictatorship, the violent destruction of democracy and their actions during the Polytechnic uprising. The trial lasted about a month, until Aug. 29 when the coup plotters were all convicted. The three perpetrators were sentenced to death, while all the soldiers were deposed and dismissed from the army with the rank of soldier. However, by a decision of the Prime Minister, the death sentences were commuted to life imprisonment.

To this day Cyprus remains divided. A northern territory is controlled by the Turkish Republic of Northern Cyprus, which is only recognized by Turkey, while the southern territory is controlled by the Greek Cypriot government, the Republic of Cyprus. The United Nations controls about 4% of the island in between, and British military bases control another 2.8% of the island.

In 1999, then-United States President Bill Clinton visited Greece and apologized for the role that the U.S. government played in supporting the military junta.

Yearly demonstrations are held in Greece on Nov. 17 that start in the morning with survivors of the junta, family members of those killed and community members laying flowers at Polytechnic University to commemorate the victims of the Regime of the Colonels. Heavy clashes are frequent in the night after large demonstrations during the evening. This year in Thessaloniki, there were no reported injuries from the clashes although demonstrators trapped in university buildings were tear gassed and suffered from breathing problems. Corporate news reported five arrests.

Over the last couple of years, students at Thessaloniki University had been building a movement to combat the new far-right government’s education bill that allows police to be installed on school campuses. Universities in Greece had been an asylum without police since the junta lost power but are now back to policing schools. In May, riot police shot a student in the face with a projectile at point-blank range during a protest on campus. While the campus cops are the current reality, some are hoping the next government will strike down the laws that brought them back to the universities. 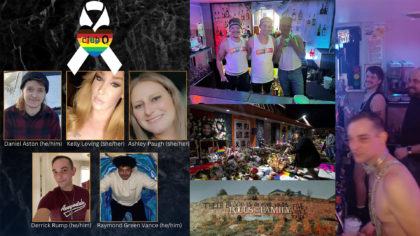 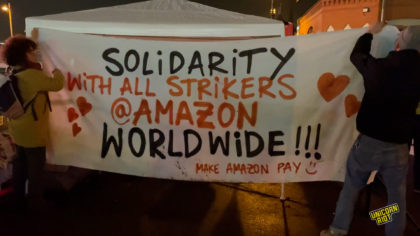