Minneapolis, MN – Despite premature messaging by the Minneapolis Public School district (MPS) that the Minneapolis teacher strike had “ended,” the strike isn’t over until the union takes a vote. The results of this weekend’s vote by the Minneapolis Federation of Teachers Local 59 will likely be public sometime on Sunday night. Some union members that Unicorn Riot’s spoken with are voting no.

[UPDATE: The Minneapolis Teacher Strike ended on March 27 with a yes* vote on a new agreement.]

After 13 days of striking, a tentative agreement was reached on Thursday night, March 24, a day after students occupied the district’s headquarters in solidarity with the teachers.

Questions at the end of the press conference ranged from how to hold teachers accountable for the lack of educational progress for students of color in the district to the retention of Black teachers. This comes a week after some longtime Black educators in the district quit their job, leaving the union over what many deem an anti-Black attitude towards both staff and the students. Watch the presser below.

Union representatives say some of the potential gains for the workers in the new contract include:

One of the union members voting no is Luke Gitar. We interviewed Gitar, a 5th grade teacher and MFT steward on March 25, 2022. Gitar said he’s voting no on the tentative agreement because he doesn’t feel good about it and was expecting salary increases way closer to the targeted $35,000 “living wage.” He said that MPS has the money in the general fund to fund the MFT proposed agreements for years.

Read the interview with Gitar below:

UR: What’s on the front of your mind as you think about the tentative agreement?

Luke: So what’s on my mind is like, I’m really happy that the city has stood up for educators. And I’m happy that educators have stood up for themselves. But I don’t feel good about the tentative agreement for teachers. It’s 2% the first year, 3%, the second year, and a one time $4,000 payment. That’s way lower than what I came out here for I came out here for a 20% raise. ESP’s, they’re saying different things. But I believe it’s way lower than the 35,000 that I was hoping that ESP’s would get. So as of right now, I’m gonna vote no, on the TA. I think they’re rushing us back to work. And we don’t have the agreement we need yet. And that’s my feeling right now.

UR: Personally, what do you think educators should get or deserve?

Luke: Well, I think people should get something much closer to our original demands, like, you know, the truth is that MPS does have $280 million in their general fund. They can fully pay all by themselves, they can pay for all the original educator demands, every single one of them. They can do it for years. The simplest thing in the Star Tribune about a deficit, they’re manipulating the numbers, we’ve got the money to do it, eventually, it’ll run out and then yes, we’ll have to go over to the state $9 billion surplus, that surplus exists because it didn’t fund the schools appropriately in the first place. So we will need that money from the state to help run education. And then ultimately, we’ve got to raise taxes on corporations. After World War II, the tax rate on corporations was 90%. Now it’s down to 30% or 20%. It’s way too low. So the money exists to give teachers everything that they’ve been asking for educators deserve everything they’ve been asking for. The city is in complete support. We were voting on these demands on the November ballot. The school board and the superintendent are completely blocking us. The mayor and the city council are not supporting us the way they need to. The governor’s not supporting us the way they need to. The people want educators to achieve our original demands and that’s what we need. The money exists for that.

Watch some edited videos from the strike below: 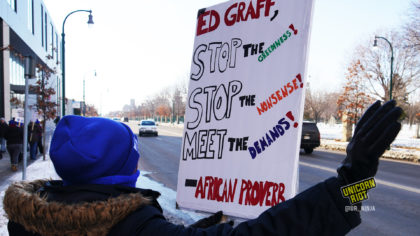 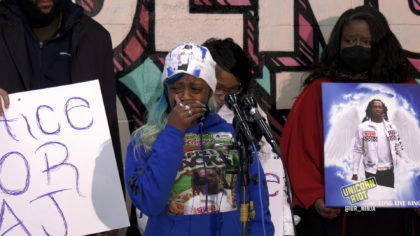