Skip to content
Your Source For Independent Media – No Ads or Paywalls – Viewer Supported
Ep. 17: #StockMarkets #ChinaMeltdown #NYSE #Stingrays #MansurBallBey #BlackLivesMatter #Macedonia #Greece #RefugeeCrisis #Nauen #Heidenau #YouStink #Beirut #ClimateChange #COP21 #China #AirPollution #MidwestUnrest #MinneapolisPolice
EPISODE 17:
#China #NYSE | This past Monday China’s stock market took a free fall, diving 8.5% and losing all of its 2015 gains. Being that China is the 2nd largest economy in the world, this affected the global markets and losses were felt in the United States as $2.1 trillion in value was lost over the last 6 days of trading and wiped out most of the gains over the last year and a half in the United States.
#Stingrays | We’ve talked about stingrays on our show before, even our last show when we spoke about the police in Chicago and L.A. using stingrays. Stingrays are military grade surveillance boxes that the police have been using discreetly domestically here in the United States. Stingrays act like cell phone towers and actually improve your signal strength while it scrapes the data off of cell phones that are in the vicinity of a stingray. Another investigation, this time in Baltimore, uncovered that the police have been using the stingray device for solving petty crimes. A detective from the Baltimore Police Department testified that stingrays have been used over 4,300 times in the last 8 years directly following FBI orders to cover up the usage from the courts. When the stingrays are used and the suspects are charged and in court, the police have routinely omitted their use of the stingrays and other surveillance equipment from the court filings and police reports.

#MansurBallBey #BlackLivesMatter #KajiemePowell | On Wednesday, August 19th, the 1 year anniversary of Kajieme Powell who was murdered by St. Louis police, the St. Louis police prompt a riot after shooting tear gas at community and family members who were grieving over the police killing of 18 year old Mansur Ball Bey killing earlier in the day. A couple cars and a building was set on fire. The next night, the protesters shifted tactics and marched to an upscale neighborhood in St. Louis, it prompted no tear gas response although protesters blocked traffic.

Two investigations have begun on the Mansur Ball Bey murder, one by the St. Louis Police Department, which will be investigating its own murder in this case and one headed by the Circuit Attorney that the head of the St. Louis Police union dubs as a “discredit to the members of the St. Louis Police Department”. It has been found that Mansur Ball Bey, an FedEx employee and recent high school graduate with a clean record, was unarmed and shot in the back while running away from the police who were conducting their raid two houses away.
#Macedonia #Greece #RefugeeCrisis | The influx of refugees from war torn countries seeking refuge in Europe continues to be met with police repression as this week Macedonia declared a state of emergency and closed it’s border with Greece. Last Saturday, Macedonian riot police tear gassed families of refugees. Over 10,000 refugees amassed at the border mostly en route to Hungary, where they don’t have to show documents at border crossings. As of Wednesday the 26th of August, Hungary is strengthening the security at its border with razor wire fences, dogs, and helicopters to deal with the masses of people seeking a better life from war torn Syria and beyond. Within days of the closure, groups of families a few hundred deep have made their way across the border and were given train rides to the Serbian border where they will attempt the 500 mile journey through north to Hungary. This Monday, over 2,100 refugees crossed the border. It is expected that 3,000 people will be arriving at their border everyday.
#Nauen #Heidenau #RefugeeCrisis | In response to the refugee crisis, far-right Neo-Nazi’s and xenophobes in Germany have been attacking refugees and rioting in Nauen and Heidenau. Refugees themselves and buses transporting refugees have been attacked and centers created to house the influx of over more than 800,000 refugees that are estimated to enter Germany this year have been burned down.
#YouStink #Beirut | Among a long list of contentious issues that many Lebanese are facing, be it the Syrian Civil War next door, the inability of the government to provide an election, or difficulties in garnishing the basic necessities, add trash collection to the list. What started as a protest against the government for not being able to collect the garbage, has turned into a massive movement to rid Lebanon of its ruling government after the police violently repressed the protests of August 22nd and 23rd. The Lebanese government erected a wall separating the street that houses government buildings from the protesters, it has since been taken down.
#ClimateChange #COP21 | July 2015 was recorded as the hottest July since record keeping began in 1880. Worldwide, July was 1.46 degrees hotter than average. Also, 2015 is on it’s way to being the biggest wildfire season on record, with over 32,000 firefighters being used against the wildfires. Firefighters have been brought in from Australia as well as New Zealand as available resources in the United States are stretched thin. In other news, Stockholm Environment Institute report stated that the Carbon market created from the Kyoto protocol failed to lower emissions, and according to the data actually increased the amount of Co2 produced adding 600 million tonnes more.
#China #AirPollution | From April 2014 to August 2015, a project named Berkeley Earth obtained air pollution data throughout China and found that over 1.6 million citizens die (correction: in video, we state 1.4 million) from the health impacts of the toxins they are breathing in. The study listed the exact pollutants and it is widely known that the extravagant amounts of coal run power plants is a major factor. Another new study shows that pollution has been traveling through the troposphere from China to the West coast of the United States of America. Among many other efforts, some of the major polluters like Arup Engineering, are now trying to help the citizenry to stay safe from the contaminants and are providing bus-stop-like ‘filtered air zones’ that circulate clear air.
#MidwestUnrest | Twenty environmental activists were arrested when they locked themselves down in front of Secretary of State John Kerry’s residence in Washington D.C. in an action dubbed Midwest Unrest. The action was aimed at pushing John Kerry and the State Department to reverse their agreements with Enbridge and the expansion of the Alberta Clipper as a federal court will hear the Alberta Clipper case on September 10th, 2015.
#Minneapolis #Police | Police in Minneapolis have been banned from making sex stings on massage parlors. In at least three recent cases, officers from the Minneapolis police have received sexual contact from masseuses before proceeding to detain the masseuse for suspected sex work. From court documents, its reported that one of the officers went as far as moaning while his genitals were fondled. In response to these cases, the Minneapolis police chief said “we are no longer using undercover operations to investigate suspected prostitution in massage businesses.”
THE RUNDOWN:

Dee, the author of “Unify or Die: Revolutionary Struggle and American Gangs” joined us for a special in-the-studio interview about his article. 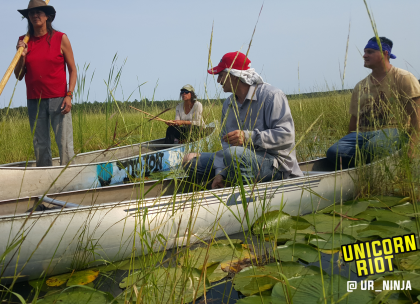 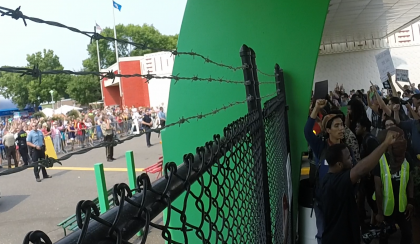