Denver, CO – When Donald Trump arrived in Denver to speak at the Western Conservative Summit on July 1st, 2016, various groups converged to show their support or opposition. An event listed as “Manda a Trump a la Chingada! // Send Trump to Hell!” hosted by Dump Trump and Denver Action Network called for people to rally in front of the Convention Center to “demonstrate their opposition to Trump’s supporters’ reactionary politics.” There were also several Trump supporters and right-wing factions present to further their own agendas. In the interview below, “Showtime” of the Three Percent United Patriots spoke about their reasons for attending the Trump rally.

Josie Valadez Fraire, an Indigenous woman who came to protest against Trump, was detained by Denver Police and issued a citation for disobeying a lawful order to put out an active fire. The “active fire” was the sacred white sage she was burning in order to cleanse negative energies and bless the space.

“The police told me I disobeyed a lawful order to put out an active fire. There was no active fire, for sage burns after you remove the fire from it. Now they crushed my sage in the street. Smudging sage is an Indigenous practice that has happened for generations upon generations on this very land. It is used to cleanse negative energies and bless the space. They (DPD) by crushing my sage and prohibiting me from practicing my spirituality, they are actively abridging upon my constitutional rights. I can practice my spirituality in whatever form I choose. Their law enforcement is actively anti-indigenous, anti-brown and the folks that arrested me were actually brown folks themselves and if that doesn’t tell you something I don’t know what does.” -Josie Valadez Fraire

A Change.org petition directed at Denver Police Chief White was started in support of Josie. Homies Unidos Denver has also created a support event for her court date on Monday, August 1st at 8 a.m.

Additional arrests occurred when a trump supporter lunged towards anti-trump protesters and an altercation ensued. Two individuals were charged with public fighting. Court support has been called for the individual who states that they were defending protestors from the attack of a Trump supporter.

Members of Vets VS Hate, Alan Pitts and Matt Stys, attended the Trump rally to show their stance against “politicians using veterans as political props for hate.”

“Everything was peaceful until riot officers showed up in military-style uniforms and specifically hauled off one of the protestors with us, an actual woman of color, an Indigenous person, who was just walking around with a handful of sage kind of blessing the space and they arrested her for having an open fire in town. So things were peaceful until the militarized police force showed up and began hauling off our peaceful protestors.” – Alan Pitts Charles Watkins, a local activist, confronts Trump supporters directly and addresses the issue of “the lesser of two evils.”

“I am a smart enough man to understand that I’m not going to vote for the lesser of evils. I understand how corrupt Hillary Clinton is, I will not put my time and effort or even trying to say anything positive about her just to be able to say “I don’t like Trump.’ I’m not for either of them. Hillary should be in prison for the actions that she’s done.” – Charles Watkins

“The 1950’s and 60s is resurfacing itself again, those that feel like that is the greatest time in America, they’re trying to make it resurface by force… they just want to be able to feel like Leave it to Beaver time in this country that they can get back to.” – Charles Watkins

Later in the evening protesters returned to the convention center. An effigy of Donald Trump in the form of a piñata was smashed and subsequently lit on fire. While police moved in we discovered that one of the Trump supporters present throughout the day’s events was Lee Stranahan, a writer for Breitbart.com, a nationalist right-wing pro-law enforcement website that also gives a platform to federal informants.

Stranahan described to us how “a black bloc guy” was telling him to “get the fuck out of here” and how he considered it threatening. He attempted to elicit a response from police however the officer informed Stranahan that what he was describing was not actually a threat.

Full interview with Lee Stranahan can be found here. 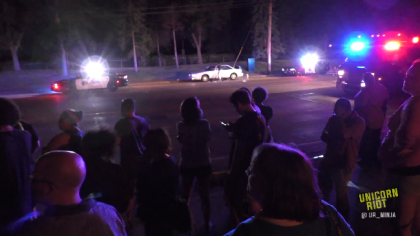