Members of Showing Up for Racial Justice (SURJ) held a flash action in Denver this evening, bringing their message to the City Council. After the opening agenda items were completed and the first order of business commenced, a quiet humming could be heard in the packed room. The humming became louder, turning to singing as folks positioned around the room began to stand and raise their voices. “Which side are you on friends, which side are you on? Justice for Michael Marshall is justice for us all” Community Demands were handed out and as Denver Sheriff’s Deputies moved in, the protesters walked into the aisles and out into the hall chanting “Black Lives Matter!” Michael Marshall was killed in December by Denver Sheriff’s Deputies after a schizophrenic episode where they forcibly restrained him until he lost consciousness. His family had to remove him from life support a week later. Denver District Attorney Mitch Morrissey, who has never indicted a police officer for excessive force leading to homicide, again failed to indict any of the deputies who killed Mr. Marshall.

“Why is Michael Marshall Dead?” was heard echoing through the City and County Building as the group descended the stairway. Their chant turned back to song to ask us all again “Which side are you on friends?” as they made their way out into the snowy night. 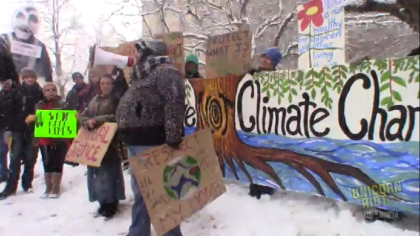