Denver, CO – In October 2014, Arturo Hernandez Garcia was the first person in Colorado to enter into sanctuary from deportation. He spent nine months on the grounds of the First Unitarian Society of Denver, where Jeanette Vizguerra is currently in sanctuary, until he was told by ICE that he was no longer an immigration priority.

However, three and a half years later, on this past Wednesday, April 26, 2017, Hernandez Garcia was detained while he was working as a flooring contractor and is being held at the GEO Group’s ICE Detention Center in Aurora, CO.

Hernandez Garcia has overstayed his original, six-month visa by nearly 14 years, he has exhausted his petitions through the immigration courts and through ICE.”

Hernandez Garcia has lived in the U.S. for almost 20 years with his wife Ana. They have two children, and one will be graduating high school in two weeks.

He applied a half-dozen times for some form of discretion in his deportation case, all of which were denied.

Hernandez Garcia’s lawyer has been working on a request to stop the deportation. His supporters believe his immigration activism and other political motivations are the reasons for his arrest.

On Sunday evening at Mountain View Friends Meeting, where Ingrid Encalada Latorre is currently in sanctuary, the Metro Denver Sanctuary Coalition is holding a vigil for Hernandez Garcia.

Encalada Latorre, who has also lived in the U.S. for almost 20 years, has been living in sanctuary for nearly five months away from her two sons.

On Wednesday, May 3, 2017, she will be leaving the church to attend her court hearing in Golden, CO. Metro Denver Sanctuary Coalition and Jefferson Unitarian Church organized a caravan to the court house and a rally in support of Encalada Latorre.

Encalada Latorre invites her supporters via a YouTube video to join her at her court hearing:

We ask Ingrid be allowed to attend court and give her testimony without fear of detention and deportation, that the court process to determine whether her legal representation was sufficient be allowed to proceed in a fair and just way. In the meantime please sign and share Ingrid’s petition.”

In our last article about immigration, we mentioned undocumented mother Maria de Jesus Jimenez Sanchez, who has lived and worked in Colorado for more than 15 years. We reported that she was detained about 2 weeks ago and was sent to the El Paso Processing Center in Texas. Unfortunately for her children, family, and community, she was deported on Tuesday, April 18, 2017.

Her attorney, Jennifer Kain-Rios, told The Denver Post that ICE told her Jimenez-Sanchez’s

latest stay request was denied because of the changeover to President Donald Trump’s administration and its ‘new priorities.’ “

Kain-Rios went on to say:

Maria de Jesus has a 15-year-old daughter with a disability. Maria de Jesus’ three other children are 7, 8, and 19 years old. She wants to stay so she can continue to take care of her children.”

Kain-Rios said possible next steps in the case are pending.

On April 17, 2017, Juan Manuel Montes, a “DREAMer” who was protected under the Deferred Action for Childhood Arrivals (DACA), was deported. He is the first case of a DREAMer with protected status to be deported. Homeland Security originally stated that his status had expired in 2015, however has since confirmed that he was under protected status until 2018.

Jeanette Vizguerra, immigrant rights activist and undocumented mother living in sanctuary in Denver, pointed out during our video interview with her, that:

They don’t want undocumented people here, but they want our money.”

In fact, the estimated collective tax payments of all undocumented immigrants in this country is $11.74 billion a year in state and local taxes.

On top of those billions in revenue, the U.S. Congress passed a law in 2007 which requires ICE to maintain at least 34,000 detention beds at any given time in order to receive $2 billion a year in federal funding.

Hernandez Garcia has been detained at the Aurora facility for almost four full days away from his children and wife. Advocates hope he is released by May 15, so he can attend his child’s high school graduation.

Unicorn Riot will continue to cover these stories.

Watch part of our interview video with Vizguerra below: 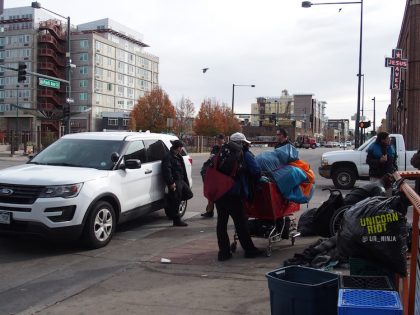 U.S. District Court of CO Certifies One of the Largest Houseless Class-Actions in U.S. History 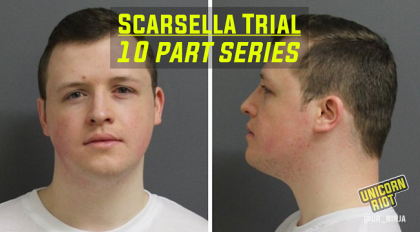