Washington, DC – The morning of Monday, September 23, traffic across DC was brought to a standstill as roving groups of protesters blocked dozens of intersections. The decentralized, swarm-style direct action was called by the coalition ‘Shut Down DC‘, and sought to force political elites and policymakers to take action to halt fossil fuel industry activity leading to catastrophic climate change.

The organizers of the coalition released a statement outlining what they sought to achieve by disrupting business as usual in the nation’s capital:

“The coalition’s demands include a Green New Deal that brings about a swift and just transition to 100% renewable energy. It also wants governments to protect at least 50% of the world’s lands and oceans, and to halt deforestation by 2030. The coalition is also calling for climate justice for everyone. The transition to a clean future must boost rather than further harm communities hit by poverty and pollution.” – Shut Down DC press release

One of the first blockades of the morning, carried out by members of the climate direct action group Rising Tide North America, used two disabled vehicles, a van and a car, to close an intersection near the Arlington Bridge, one of the main traffic arteries into the capitol.

To see our full live coverage of direct actions on September 23, which starts with this first blockade, press play below.

Police, already staged in the area, responded quickly and appeared to prevent several people from locking themselves to the bottom of the van. Officers then towed the van away while two protesters were still locked on top of the van. DC Metro Police have not responded to our request for comment about their safety policies regarding moving vehicles with protesters still locked onto them.

Yesterday AM, the #ShutDownDC day of action disrupted business in the nation’s capitol to demand policymakers address runaway climate change.

The first blockade of the morning began with two cars used to shut down an intersection by the Arlington Bridge: https://t.co/fX5mJR0Qpa pic.twitter.com/j9tH9z5FF4

Around 7:30 AM, activists from the group Extinction Rebellion blocked the intersection of 16th and K streets by parking a sailboat in the middle of the street, just blocks from the White House.

#BREAKING: Activists w Extinction Rebellion shut down intersection of 16th & K in Washington, DC by parking a sailboat in the street.

This is part of several disruptive #ClimateStrike actions working to #ShutDownDC this AM. pic.twitter.com/mHlHQXlOXA

Protesters said they used the boat, named ‘GBR’ after the Great Barrier Reef, to symbolize the fact that many areas in DC will be submerged underwater within decades if drastic action doesn’t reduce runaway climate change from burning fossil fuels. Eight protesters, working in four pairs of two, used lockbox devices to secure themselves to the boat’s undercarriage so that police couldn’t easily tow the boat away.

A spokesperson with the coalition who organized #ShutdownDC is a youth wrestling coach who reminded us that Washington, D.C. is “a swamp.” He said the intersection of 16th & K Street, within view of the White House, was chosen as the spot to place the “Great Barrier Reef” sailboat blockade because “if we continue to do nothing about the threat of climate breakdown, this is where the marina will be.”

“We’re essentially out here because this is the professional core of DC, one of the strongest, one of the largest concentrations of power on the face of this planet. […] IPCC says that we have 10 years to de-carbonize the economy, or else we are going to face civilization-ending levels of climate change. It will be slow, but it will happen, and it will be decided in 10 years.” – Sun, spokesperson for #ShutdownDC coalition

Police appeared to have trained in advance for cutting protesters out of lockboxes; however, it took MPD ‘cut teams’ about three hours to remove the final locked-down activists and tow the sailboat away. The sailboat blockade appears to been the one that lasted the longest, blocking 16th & K for about three hours, including almost all of rush hour.

[Check out our 2016 story exposing FEMA’s protest crowd control manual, which shows how police are trained to use ‘cut teams’ to neutralize civil disobedience devices.]

After the sailboat was removed, the crowd that had gathered around it marched to another nearby intersection, where activists who had chained themselves to ladders, had shut down traffic for the surrounding area.

Our #LIVE coverage of #ClimateStrikedc continues!

4hrs LIVE so far and we are prepared to be live as long as needed thanks to viewer support!https://t.co/BLzqRnMPbn

Participants in the action shared speeches about what it was like to fight for a livable future for their generation as others cheered and chanted. Eventually, the group marched to a nearby park before the actions ended and crowds dispersed for the day at around noon.

Other protest actions Monday morning included a blockade of ICE headquarters, which led to several arrests. Another group of several college students reportedly marched directly onto a freeway, shutting down traffic.

Black Lives Matter DC worked with a group of nurses and healthcare workers to bring attention to environmental racism and negative health impacts brought to poor Black DC residents living east of the Potomac river near fossil fuel infrastructure that pollutes their air.

Another disruption organized by climate activists from 350.org blockaded an intersection near Congress in the US Capitol building.

Happening NOW: We're shutting down an intersection right by the Capitol. Responding to the climate crisis means no more business as usual—so we're disrupting business as usual for politicians & lobbyists until we get the solutions we need. #ClimateStrike #ShutDownDC pic.twitter.com/PHkD3Pg5Ar

An estimated total of 32 arrests took place Monday and all arrestees were processed and released without bail the same day.

According to Shut Down DC organizers, at least 22 different intersections were blockaded on the morning of Monday September 23. DC Police say they arrested 26 protesters, while 6 were arrested by Capitol Police near Congress, according to the Washington Post.

The ‘ShutDownDC’ actions took place on the same day as the United Nations’ latest climate summit. Swedish 16-year-old Greta Thunberg, who initiated the “Fridays for the Future” climate youth walkout movement, had harsh words for world leaders at the UN who she said were ignoring their moral responsibility to prevent global climate disaster.

“…You all come to us young people for hope. How dare you… People are suffering, people are dying, entire ecosystems are collapsing, we are in the beginning of the mass extinction & all you can talk about is money & fairytales of economic growth…For more than 30 years the science has been crystal clear… I don’t want your hope. I don’t want you to be hopeful. I want you to panic…The eyes of all future generations are upon you, and if you choose to fail us, I say we will never forgive you.” – Greta Thunberg at UN Climate Summit

Greta Thunberg joined fifteen other young people from around to world and filed a legal complaint about climate change on the same day the actions took place.

Ridhima Pandey, an 11-year-old from India and one of the signers of the complaint said she was there because,

“Climate change is not a problem which any country can solve on its own. All the countries must join their hands together to solve this crisis as it is a global issue” – Ridhima Pandey

Ridhima Pandey was part of the sixteen youth between the ages of eight and 17 that came from countries like Argentina, Brazil, France, Germany, India, Palau, Marshall Islands, Nigeria, South Africa, Sweden, Tunisia, and the United States to file the complaint.

The days events came three days after the Sept 20, 2019 youth ‘climate strike’ where millions of students around the world walked out of school to demand action to address runaway climate change. Many youth Unicorn Riot spoke with at the DC youth walkout on Friday told us they have little hope for a livable future and feel like most adults don’t care.

An October 2018 report by the United Nation’s Intergovernmental Panel on Climate Change (IPCC), concluded that humanity has about a decade to all but eliminate fossil fuels in order to avoid civilization-ending levels of catastrophic environmental chaos. 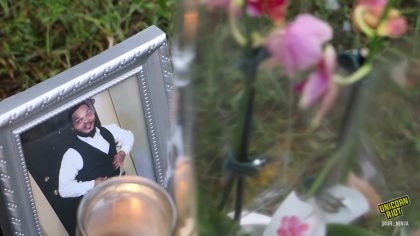 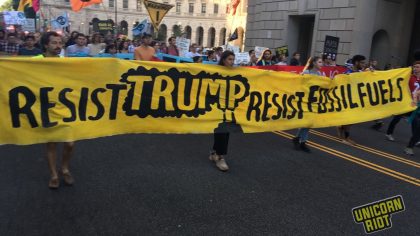