Washington, DC – In the courtroom of Judge Lynn Leibovitz, DC Superior Court, proceedings are underway for the first trial group of those mass-arrested during Trump’s inauguration protests. The individuals who were rounded up indiscriminately by police using a crowd-control tactic known as “kettling”, are now spending their days in front of a jury.

In a trial expected to last many weeks, Assistant US Attorneys Jennifer Kerkhoff and Rizwan Qureshi are testing the viability of their radical guilt-by-association case on the first six defendants, who have insisted on their sixth amendment right to a speedy trial.

Another group of defendants with trials in December, who also claimed the right to a speedy trial, had their felony charges reduced to a few misdemeanors. However, defendants in the current trial are still facing up to 61 years in prison, stemming from multiple felonies in a boilerplate indictment filed in April 2017.

The majority of the trial-to-date has been spent examining the details of various acts of property destruction, which indisputably took place on January 20, 2017 (J20).

What makes the prosecution’s case so unusual is that Kerkhoff has admitted that none of the current defendants are alleged to have destroyed any property. By pointing to black clothing and bandanas, and consistently invoking the ‘black bloc’ as an imposing menacing force, the US Attorney’s Office seeks to hold the entire mass of people that were in the vicinity of the anticapitalist and antifascist march personally and legally responsible for the alleged acts of a few individual attendees.

After opening statements were presented on Monday, November 20, a slew of prosecution witnesses took the stand to testify. Jurors heard extensive testimony from several managers of downtown DC commercial locations where property was damaged.

On Monday, November 27, J20 defendants and 100 or so supporters, held a rally outside the courthouse before heading inside as trial hearings resumed for the week. Unicorn Riot was live for the rally, watch it below.

After spending much of the day questioning the managers of Starbucks and McDonald’s, the prosecution called to the stand several police officers who had been deployed on inauguration day as part of Civil Disturbance Unit (CDU) platoon.

Officer Omar Forrester described being ordered to “hold the line” as police began setting up the kettle at 12th & L streets. Forrester recounted being “charged” when a group of people suddenly broke through police lines to escape the impending mass arrest trap.

Upon cross-examination, defense counsel replayed portions of his body camera video (which the prosecution had entered into evidence) to point out footage of National Lawyers Guild legal observers stating that they were attorneys and asking to leave. They were not allowed to leave and were arrested instead.

Officer Forrester appeared unable to distinguish between reporters, and protesters who allegedly committed crimes. At one point he spoke of "a lot of people with cameras filming and throwing stuff."

Officer Kamil Rembiszewski was also deployed as part of a separate CDU platoon, and described traveling through downtown DC on inauguration day observing property that had been damaged. Rembiszewski shared that he had to repeatedly get out of his CDU’s 12-passenger van to drag away the numerous newspaper boxes that were blocking the road. When asked, he clarified that he did not witness any “actual acts” of property destruction, merely the after effects. Rembiszewski also went over parts of his body camera footage and answered questions from the prosecution and the defense.

On Tuesday, November 28, Rembiszewski finished testifying and the prosecution then called DC Police Officer Bryan Adelmeyer, who was detailed to an MPD intelligence unit and tasked with infiltrating ‘Disrupt J20’ in the lead-up to Trump’s inauguration.

Adelmeyer described attending various protest organizing meetings on January 8, 14, and 19. He also claimed to have spent a day at an “‘action camp’ put on by some of the organizers of Disrupt J20.”

Partway during Adelmeyer’s testimony, Kerkhoff moved to introduce into evidence a video, that was secretly taken, of a January 8 Disrupt J20 planning meeting, by an employee of Project Veritas. Project Veritas is a discredited right-wing fake news organization, which the day before Adelmeyer’s testimony, had been exposed trying to trick the Washington Post into publishing a fabricated story intended to discredit Roy Moore’s accusers. Project Veritas has received at least $20,000 in donations from Donald Trump’s Trump Foundation. In 2013, James O’Keefe of Project Veritas paid $100,000 to settle a lawsuit over his use of manipulated video evidence in one of his “investigations.”

Officer Adelmeyer, when prompted by Kerkhoff, said that he was present at the meeting seen in the recording and while he himself made no recording, he believed it to be accurate. Kerkhoff initially declined to state the source of the video but did eventually admit it came from Project Veritas.

The video, taken at a meeting in a church basement, shows some organizers discussing DC police tactics, potential locations to march on January 20, details about banners and signs, as well as logistics for providing housing for people coming in from out of town. Insisting that the video was evidence of a conspiracy, the prosecution took particular interest in comments encouraging people to wear black on inauguration day, as well as an organizer’s request “don’t break a window at the Festival of Resistance.”

The 40-minute video, which was paused many times as Kerkhoff questioned Adelmeyer in front of the jury, covers a variety of protest organizing related subjects, but does not appear to have any direct links to any of the concrete criminal acts alleged in the indictment.

Court hearings in #J20 trial today have centered on a protest planning meeting. No current defendants are alleged to have been at the meeting yet it is part of the evidence @USAO_DC is using to paint them as 'conspirators' based on their attendance at Trump inauguration protests.

On Wednesday, November 29, defense attorneys are expected to cross-examine Adelmeyer at length. They have already informed Judge Leibovitz that they plan to delve into how the officer was named in a lawsuit for false arrest and excessive force (the case was settled out of court earlier this year), and had been the subject of an internal affairs investigation.

We will continue to cover the court proceedings and will update as more information becomes available. Follow us on Twitter for live updates. 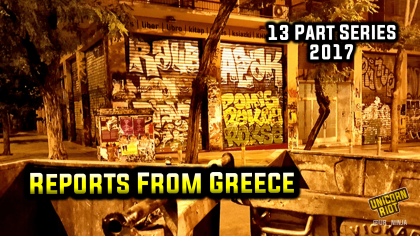 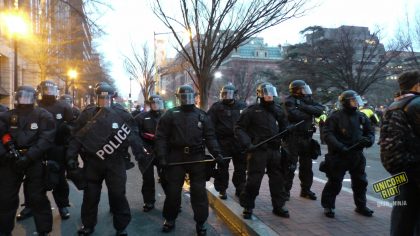