During the summer of 2017, Unicorn Riot documented over a dozen stories from Athens, Greece. The stories were varied, most displaying networks of mutual aid, including housing, healthcare, food, detainee support and more, created by anarchists and anti-authoritarians in and around Exarcheia.

We produced three multi-part series, Political Prisoners, Networks of Resistance, Alternative Economies & Community Currencies, and interviewed local Greek folks as well as heard from participants of frontline struggles and creators of alternative societies across the globe. Click on the pictures below to view the articles and media that accompany each subject.

We started our coverage with Alternatives to Neoliberal Capitalism – Introduction which laid the groundwork that contextualized the rest of our special reports. From the austerity brought on by the economic crisis has come alternatives to the systems as we know them, being practiced in the open. Anarchists and anti-authoritarians have created free healthcare and housing for their community and refugees that have fled Western-led wars.

Action of Solidarity With Squats and Against Evictions – On Friday, June 24, a “coordination of refugee squats” staged a protest in front of the Ministry of Migration at Klathmonos Square. In the region of Attiki alone, where Athens is located, there are approximately 40 self-organized social centers. These ‘squats’ are unused state and/or private property being occupied and self-managed entirely by volunteers who have set up networks of infrastructure and support for refugees and others hit hard by the financial crisis.

Anarchists Defend Exarcheia’s Autonomous Zone From Police – Riot police had bombs, molotovs, and rocks thrown at them as the community of Exarcheia defended its autonomous zone in Athens, Greece on June 29, 2017. Anarchists and other anti-authoritarians attacked riot police that were stationed around Polytechnic University after a long week of police threats to hold a public meeting in Exarcheia. Police threw dozens of CS gas canisters throughout the night, leaving full blocks exposed to the burning gas. It is reported that two riot police were injured and no arrests were made.

ADYE, Exarcheia’s Free Self-Organized Healthcare Clinic – Unicorn Riot spoke to Lefteris and Manolis, respectively a doctor and a dentist who both provide their services free of charge at ADYE’s patient-centered health clinic, about the origins of ADYE, which operates out of the self-organized K Vox squat, as well as what is provided there and why they are in existence.

Tasos Freed & Irianna Jailed – Unicorn Riot spoke with Greek activist and writer Panagiotis Koustas about the high profile ‘terrorist’ cases of Tasos Theofilou and Irianna, a 29-year-old Greek PhD student, and the Greek state’s repression of political dissent. Koustas says that “Greece has a very long tradition in framing anarchists with charges that are fictional, and most of the times very badly written charges by police officers that are horrible fiction writers.”

Targeting of Anarchists & Autonomous Groups – We continued hearing from Greek activist and writer Panagiotis Koustas in part 2 of our feature on political prisoners in Greece. we took a deeper look into the repression that anarchists and anti-authoritarians have faced as modern Greek state repression has its roots in anti-communist and anti-anarchist policies from the 1920s, the World War II U.S.-imposed Marshall Plan, and a seven-year military dictatorship that ended in 1974.

The Networks of Resistance: 1st European Local Struggles Conference was organized to “create an open source platform” to expand upon and share the experiences, knowledge, and ideas that have arisen from organically created resistance encampments currently building new alternatives outside of capitalism and nation-states. During the first day of the conference, activists from the front-lines of three European struggles, Hambach Forest, Bure, and the ZAD, converged in the smoky Embros Theater to speak about their struggle against specific projects while building alternative, autonomous ways of living outside of capitalism. Hear their stories and watch their presentations.

In part 2 of our coverage of the Networks of Resistance conference we document the presentation of technical projects focusing on building infrastructure, background on ExarcheiaNet, and the autonomous zones of Exarcheia in Athens, as well as the alternative society being built in Catalonia, Spain, the Catalan Integral Cooperativa (CIC).  CIC is “a network of different entities, collectives, and individuals who are working together to build this little bubble and protect itself from attacks from the State“

Athens Integral Cooperative – Anti-capitalists in Athens are creating alternatives to capitalism. Unicorn Riot’s Niko spoke with Theodore from the Athens Integral Cooperative about the alternative economy they are creating and how it works to integrate “individuals, collectives, and social forces, that already make a social economy” into a substantial, alternative, and autonomous economy. This was the first of three specials on alternative economies and community currencies.

FairCoop – Tools born from the internet, applied across autonomous networks and movements seeking alternatives to capitalism, are providing the infrastructure of alternative societies. In the last of our specials on community currencies and alternative economies, we showcase FairCoop, a self-organized and self-managed global cooperative created through the internet outside the domain of the nation-state.

Greece’s First Housing Squat for Refugees & Migrants, Notara 26 – Notara 26, a refugee and migrant housing squat in Athens, has housed over 7,000 refugees and migrants since its inception in September 2015. Unicorn Riot visited and toured Notara 26, the self-organized squat in the Exarcheia neighborhood of Athens, Greece. During our visit, we sat down and spoke with volunteers, Giannis, Mimi, and Dionysus, about the history of the squat, the refugee crisis, Exarcheia, solidarity, and much more. As squats continue to face attacks from fascists and the state in Greece, we bring you a closer look at one of the spaces that was attacked in 2016.

Special thanks to, first of all, Dina and Panos for making Unicorn Riot your full time schedule while we were there, to the wonderful folks of OmniaTV, Iris, Xara, and The House of Women, to Lefteris, Manolis, and the rest of ADYE, Mimi, Giannis, Dionysius, and all of Notara 26, Kinimatini, all of the Dromografos, Theodore, Athens Integral Cooperative, Nosotros, Embros Theater, Void Network, Catalan Integral Cooperative, frontliners from Hambach Forest, ZAD-NDDL, and the Bure, Caroline Dawa, conference organizers, Bouka, Exarcheia Square, Unicorn Riot members, supporters who allowed our travels and all the gracious folks who spoke with us, helped us, and supported us while in Athens.

End of the Year Fundraiser 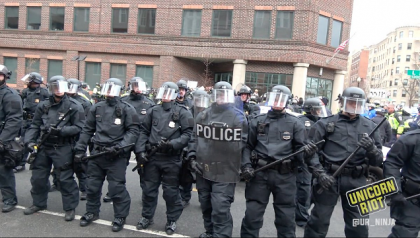