Minnesota Attorney General (AG) Keith Ellison created a working group in 2019 to examine and address what his office describes as “Police-Involved Deadly Force Encounters”. The working group’s recommendations were summarized in February 2020, and presented on Wednesday, March 4. AG Ellison, co-chair of the working group, did not attend this meeting; the findings were presented by the other co-chair, Commissioner John Harrington of the MN Department of Public Safety.

In a press conference before the March 4 meeting, TCC4J member Ted Mika explained that during ‘listening sessions‘ organized by the working group in 2019, community testimony was repeatedly offered about the “violent, fear-based worker training” formerly known as ‘Bulletproof Warrior’. The training cultivates fear in police officers and conditions them to respond to threats with lethal force.

“No one should want it to be comfortable for someone to kill our people in the community. And after all that mentioned in the working group, no one even brought it up in the executive summary of the working group.” — Ted Mika, TCC4J

Though the ‘warrior’ training was banned last year by the City of Minneapolis, Minneapolis Police Federation President Lt. Bob Kroll has been openly organizing Minneapolis police officers to continue attending the training while off-duty.

Communities United Against Police Brutality (CUAPB) president and founding member, Michelle Gross, said that the community had worked for years to develop AG Ellison’s interest in the cases that have been mishandled by the Bureau of Criminal Apprehension (BCA), pointing to their investigations on police killings of Jamar Clark in 2015 and of Thurman Blevins in 2018.

“We will never have police doing the right thing that they have to do until they know that there’s a chance that they might go to jail.” — Monique Cullars-Doty, aunt of Marcus Golden (killed by St. Paul police)

The TCC4J asserted that the subject of the working group, “police-involved deadly force encounters” is a “euphemism for murders of citizens by police officers“.

After the press conference had ended, community members filed into Capitol Room 120 for the presentation of the working group’s findings. Commissioner Harrington, who served as the Police Chief for the City of St. Paul from 2004–2010, clarified near the beginning of his presentation that the phrase officer-involved shootings wasn’t being used because it isn’t broad enough; he noted that sometimes police kill people using means other than firearms.

He also said that for the AG’s office to not take on the task of investigating police killings “would have been a dereliction of duty.”

Harrington noted that 50% of deadly police encounters in Minnesota involve a person having a mental health crisis, and said this statistic indicates an imperative for a different solution to address those in mental health crisis “other than simply sending the police.” Minutes later he rhetorically asked “who else is going to show up” over and over again, with regards to police being called in situations where a person is experiencing a crisis and “out of control.”

Michelle Gross was the first to testify after Harrington had finished. She noted that every county in Minnesota has a mobile mental health crisis team, and that of the thousands of 911 phone calls every year regarding emotionally disturbed persons (EDPs), “only a few involved a weapon or danger.” She recommended that calls regarding EDPs be deflected “by way of dispatch triage directly to those teams, and only in situations where there is a weapon or potential violence should there be a police response.”

Toshira Garraway, whose fiancé Justin Teigen was found dead after an encounter with St. Paul police in 2009, was the next to testify. She spoke about officers’ fear of individuals they consider threatening, saying, “What happened to Justin, and if you’ve all seen the pictures, was clearly a hate crime.” Garraway’s primary recommendation is that the statute of limitations on wrongful death be removed; currently the limit is three years, so even though there is compelling evidence about Justin’s death, which happened ten years ago, Garraway and their son do not qualify for compensation from the crime victims justice unit.

Her second recommendation was that investigations into police-involved deadly incidents be performed by an organization other than the BCA, explaining, “there’s substantial evidence that proves and shows that the St. Paul Police murdered my son’s father and the BCA helped cover it up.”

Matilda Smith, mother to Jaffort smith, spoke next about how her son had been killed when St. Paul police officers shot him nearly 50 times. The BCA agent who came to Smith’s house to inform her of her son’s death seemed to have been “bragging” about the sheer number of times Jaffort had been shot. Smith explained that what is needed in such a situation is a counselor who will not further traumatize the surviving family members.

She added that though she would never get over what police did to her son four years ago, she does not blame the officers that killed her son:

“I blame the system. I blame this Capitol and everybody in it for allowing this to happen to my son and all of us. The training. See, those police didn’t train themselves. Somebody trained them to kill. […] Your departments are embedded with white supremacy, and they’re going out killing our people.” — Matilda Smith, mother of Jaffort Smith (killed by St. Paul police)

Monique Cullars-Doty, whose nephew Marcus Golden was killed by police in 2015, was the final community member to speak that afternoon before the session adjourned. She began her testimony by saying, “As I expected, I am completely underwhelmed with this report.” Cullars-Doty re-emphasized the need for removing the statute of limitations for police homicides, noting that the same had been done for sexual assault cases against the Catholic church in Minnesota and other cases of sex assault, and that the same could be done for surviving family members whose loved ones had had their lives cut short by an officer-involved killing.

She stressed that so long as police face no real consequences for planting or destroying evidence or for perjury, “their behavior is completely acceptable, regardless of this piece of paper right here,” saying that their actions would be covered up by their departments and by the administrators who oversee them. She also clarified that the police federation is not a union, as specified in the state’s report, because “there is no union that will recognize the police as a union.”

Cullars-Doty explained that it didn’t make sense to construct a panel to make recommendations on how to address police killings, only to populate the panel with people who are upholding the system: “they are not gonna break that thin blue line to make real change.“

Michelle Gross called this the “politics of appeasement, not measurable solutions” explaining that the recommendations of the Working Group’s report will not address underlying causes nor curtail incidents of officer-involved killings.

After the community members’ testimony, Representative Raymond Dehn (D-59B) told the family members that he has begun work around removing the statute of limitations for officer-involved shootings. He acknowledged that as Cullars-Doty had said, legislation had been created regarding sex assault cases by clergy and other perpetrators, and stated that accountability is a process, rather than something that expires. Rep. Dehn did not respond to requests for comment on the status of this legislation.

Multiple community members stated that increasing funding for the BCA would not result in justice for families of loved ones killed by police. Removing the statute of limitations on officer-involved killings, enacting mandatory minimum sentencing for officers who have lied or fabricated evidence, and eliminating financial barriers to access dispatch recordings and other evidence relevant to a court case were other recommendations offered on March 4 and in previous ‘listening sessions.’

For years, a variety of community groups in the Twin Cities have been pushing the government for transparency, independent investigations, community-led civilian review boards, prosecutions, and overall accountability after police kill community members. A local group called MPD 150, a horizontally-organized community-based ‘people’s project evaluating policing,’ has presented “a practical pathway for the dismantling of the Minneapolis Police Department.”

In 2017, MPD 150 released their 36-page report ‘Enough is Enough: a 150 year performance review of the Minneapolis Police Department’. Unicorn Riot live streamed an event premiering the report’s recommendations. In the ‘future’ section of their report, they touch on the topic of police dealing with mental crisis and suggest “a more specialized and decentralized response to emergencies.“

“Police are poorly trained to deal with the vast majority of crises; for every call in which the use of violence becomes necessary, there are many mental health crises and domestic violence calls that cops are poorly equipped to deal with. The solution isn’t trying to train officers to do everything – it’s a more specialized and decentralized response to emergencies.“

Watch our video of MPD 150’s release event below:

“Implementation of an independent state agency to investigate deadly force incidents and prosecute the involved officers” was first on the list. Click here to read their press release from March 4.

We will continue to report on efforts by the community and by the state to curb police killings and hold officers accountable for uses of deadly force. Follow Unicorn Riot for updates. 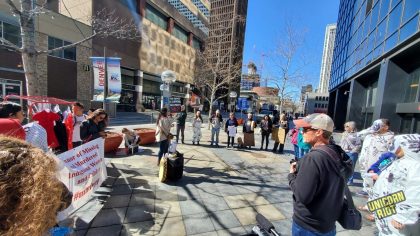 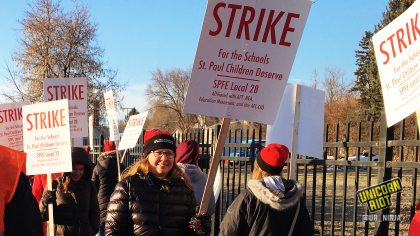