Here is the criminal complaint:

The criminal complaint against one of the four people accused of firing at a crowd of protesters, wounding five. pic.twitter.com/l5nXY3lTdK — Libor Jany (@StribJany) November 30, 2015

For additional information: @webster has released a very large archive of social media videos collected from the aggressors including those who shot at protesters.

As winter storm Delphi arrived at the 4th Precinct, protesters braced for escalation from the Minneapolis Police Department. [LIVE video coverage here as circumstances permit]. Around 5PM, for the first time in many days, MPD configured large lights at the front door of the Precinct, pointed at the crowd, and scaffolding in the parking lot provided new perches for police to potentially overlook any attempt to sweep out the camp.

Police set up lights in frnt of precinct 4 first time in days. Behind the cam, the cmty readies self 4 poss eviction pic.twitter.com/3VCq1iGEGm — Unicorn Riot (@UR_Ninja) November 30, 2015

Earlier in the day, Minneapolis Mayor Betsy Hodges and others called upon campers to disperse, heavily blaming emissions from campfires. Full statement here. (Meanwhile the HERC garbage burner about a mile away continues to be one of the metro area’s leading sources of major atmospheric toxins. @snipy aptly deemed this “bullshit concern trolling” since they never usually care about local air quality.)

Here are some of the reactions from the community at the #4thPrecinctShutdown to the morning meeting which included the Mayor, Rep. Keith Ellison, clergy members and other ‘community leaders’:

The community at the #4thPrecinctShutdown, continues to be organized and steadfast, as it braves the winter conditions.

Unicorn Riot will continue to provide on the ground updates and uncut live coverage of the #4thPrecinctShutdown as it moves into December (amassing over 15 days now). For all of our livestream posts of the #Justice4Jamar protests click here. 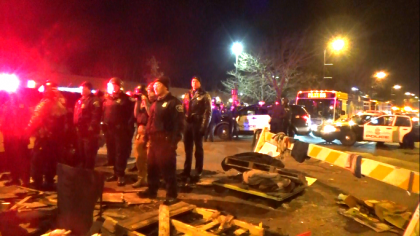 8 Arrests Made as #4thPrecinctShutDown Eradicated in Early Morning Raid