November 24 – On Tuesday afternoon the #Justice4Jamar and #BlackLivesMatter Minneapolis community rallied in the wake of five protesters having been shot by white supremacists the night before. A march with 1.5K participants circled City Hall while dozens more maintained the camp. The marchers also paid their respects at James & Plymouth where Jamar Clark had been fatally shot by Minneapolis police on November 15th.

Musical performances carried on into the evening in spite of continuing online threats to attack the encampment. After the shootings the night before it was impossible to brush off the threats, and everyone in the camp was on high alert.

Last Friday night, Unicorn Riot reporters and campers had exposed a group livestreaming on a short-lived channel, claiming affiliation with the /k/ board on 4chan.

Content advisory for racial slurs and hate speech in video and screenshot following: Also please note that “Sam Hyde” is not a real person, it’s a long story… ‘Sam Hyde’ and ‘Ben Garrison’ are two fake aggressor identities used by the trolls to misdirect camp participants and supporters through a web of sock puppet Twitter accounts and Livestream chat handles. On Friday night they sought out Unicorn Riot in order to be interviewed on our livestream where they can be heard saying “the fire is rising”.

Organizers realized quickly that they were dealing with white supremacist aggressors and kicked them out of the encampment.

On Monday night multiple witnesses at the encampment noticed many of the same people in the group as Friday night, and once again they were filming. They reported hearing shouts of “Race War”, “Gas the Kikes” and “Trump 2016!” from the assailants before firing into the crowd around 10:45PM.  This racially motivated armed attack was livestreamed by its perpetrators. Unicorn Riot can confirm that even though the channels were quickly deactivated, Livestream.com still has footage from both incidents in their system and according to their representatives can only be obtained with a warrant.

The man wielding the gun in Friday’s livestream, Julio Suarez, goes by Saiga Marine and was captured by law enforcement in a vehicle that matched the video from Friday night. He was later released by MPD because he had not been near the protest on Monday night. Suarez posted a note to the /k/ucks after he was released saying “the fire is rising”.

“What an idiot,”one 4chan user wrote when news broke of his possible involvement in the shootings.  “Play stupid games, win stupid prizes. Never should’ve trolled that protest so hard.”

Not surprisingly, hoping to pose with weapons professionally, Suarez also had a modeling page, which has been taken down.

On Tuesday  Police raided a house in Bloomington in full SWAT mode and then later arrested two others who the cops claim turned themselves in. Now in custody, as of early Thursday morning: Gustavsson, 21, from Hermantown, MN • Scarsella, 23, from Lakeville, MN • Macey, 26, from Pine City, MN • Backman from Eagan, MN was the last arrested.

The Star Tribune covered the social media angles, including how UnicornRiot and the people at the encampment had exposed the team earlier.

Tuesday was a long and emotionally exhausting day for #Justice4Jamar participants, fighting against these organized currents of racist violence and psychological intimidation. Nonetheless the surge of solidarity marches around the United States, each city with their own examples of local violence by police, has quickly helped forge a new tone and a deeper call for resistance.

UnicornRiot and many others are monitoring the activities of these volatile stalkers and vigilantes. Attentive online supporters were the first to suss out the trolls’ video channel URL when they rolled into camp on Friday and their focus made all the difference. We will extend our analysis of this emerging trend towards clustered violent actors attacking social movements in coming days; please stay tuned. 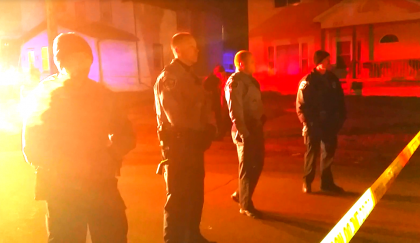