Minneapolis, MN – On November 23rd, 2015, around 10:45 p.m. four white supremacists entered the protests at the #4thPrecinctShutDown and shot five people after getting asked to reveal their faces or leave.

After they were confronted and asked to leave, some of the men shouted racial slurs. A few of the community members walked behind the men ushering them to their car towards 14th Ave. and Morgan Ave., one block north of the 4th Precinct. The men opened fire as they reached their vehicle, shooting around 8 bullets that struck a total of five people; it’s reported that all victims have non-life-threatening injuries, one took a bullet in the stomach, a few in the leg, and one in the arm.

After the protesters were wounded by the attackers, protesters called 911 and asked for help from the police that were stationed around the precinct and the precinct itself to no avail. Protesters also stated that the police were “laughing” and “ignoring” them when they were asking for help, and that one officer actually stated “you asked for this”. After 15 minutes the first ambulance arrived. The police at the 4th Precinct declined to aid people, standing passively. The police then moved in with crowd control gear to control the crime scene and maced the crowd that was assisting the wounded and standing asking for help, and filming, as well violently grabbing and pushing a contributor to Unicorn Riot.

While live-streaming the aftermath, we interviewed witnesses at the scene:

Here is a still of the perpetrators:

Here is a video of the perpetrators:

Vid of our safety team asking them to leave moments before they opened fire #Justice4Jamar #4thPrecinctShutDown pic.twitter.com/Dw8UpgZr6X

UnicornRiot has been reporting on scene as the story develops. More elements to story as we get them:  According to @AfrikaAF, this was one of the people shot tonight:

Other coverage: Shooting at Protests in Minneapolis: 5 Fast Facts You Need to Know via Heavy.com. Ben Norton summary at salon.com. Star Tribune failed to note that MPD attacked protesters in its initial report and is unworthy of hyperlinks. CBS/WCCO also posted a weak story as noted by CUAPB:

Appalling. Here’s some info the article doesn’t cover, since they clearly never bothered talking to any of the activists on the scene: 1) Five people were shot in total–two treated on the scene and three went to the hospital. 2) One person received a serious wound after being shot in the abdomen. He was taken into surgery. 3) Despite this, cops taunted protesters, 911 put them on hold repeatedly, and the ambulance took at least 15 minutes to arrive. Cops added to the mayhem by pepper spraying people while they waited for the ambulance. 4) No effort was made to catch the perpetrators, who were wearing ski masks and kevlar vests. Do you know anyone who owns a kevlar vest? Average people are not allowed to buy them.

UPDATE (11/24 @12:43PM CST): A screen-captured video recording was given to TwinCities NewsTalk which proves the attack against BlackLivesMatter protesters was streamed live by the shooters. The suspected attackers’ Livestream account and video has since been deleted.

Unicorn Riot contacted Livestream about whether the footage was retrievable in their archive, to which they said yes, but only by police with a warrant. When we asked if Livestream has been contacted by any investigating authority, they gave “no comment”. 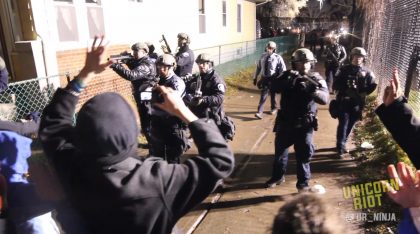