Morton County, ND – On Monday, December 19th, water protectors charged with disorderly conduct stemming from their August 11th arrests made their first appearances in Morton County court. The results of the appearances was Judge Cynthia Feland granting a continuance till January 31st, 2017.

The judge heard Morton County State’s Attorney Ladd Erickson’s motion to “keep issues of tribal sovereignty, the concerns about the Dakota Access Pipeline and “any other social or political cause” out of the courtroom and did not approve it.

Judge Feland stated in her denial that defendants didn’t have enough time to respond to the motion.

The motion came days after County Attorney Ladd Erickson filed a motion requesting that DAPL water protectors not be provided with free legal counsel by public defenders. The Water Protector Legal Collective responded to the motion by calling for Ladd Erickson to step down for trying to deny water protectors their Sixth Amendment constitutional rights.

Monday’s trial hearing follows a week that saw outgoing North Dakota Governor Jack Dalrymple meet with Standing Rock Tribal Chairman Dave Archambault on December 12th. They met to discuss the removal of the Backwater Bridge roadblock put in place after the October 27th eviction of the 1851 treaty camp and to better North Dakota and Tribal relations. Those in attendance felt the meeting went well, according to press reports.

On his way out of office, Dalrymple asserted that water protectors deployed “fake news” to discredit the pipeline, although specific examples were not cited.

Gov. Dalrymple’s term ended on Thursday and the new Governor of North Dakota, Doug Burgum, made his first public statement. On his first day of office Burgum, a technology businessman, stated that the reason the “legal” Dakota Access Pipeline project has been delayed is because of Obama administration failures.

Burgum reinforced North Dakota’s stance that the pipeline should be completed, saying, “I support the legal completion of this pipeline.” He used this first public statement as Governor to ask Obama for approval of the easement, and stated his plans to ask the incoming Trump administration to approve the pipeline.

Burgum’s announcement follows the leak of an audio recording of a December 14th Energy Transfer Partners corporate meeting. Those at the meeting discussed their expectations that the pipeline would be approved promptly after Trump’s January 20th inauguration.

In the recording, an Energy Transfer Partners (ETP) official states, “Make make no mistake about it, this pipeline is going through, it’s going through exactly where we have it planned.” The man heard speaking on the recording also says that ETP officials have met with the National Sheriffs Association, a private entity made up of Sheriffs from around the country which has helped coordinate out-of-state law enforcement assistance to the Morton County Sheriff.  Both the statements from Energy Transfer Partners and the new Governor of North Dakota threw shade on water protectors’ celebrated victory of the December 4th easement denial by the Army Corp of Engineers.

Water protectors still hold space on land just south of the Dakota Access Pipeline drill pad, considered by the federal government to be US Army Corps of Engineers property.   They’ve stated they are there to protect sacred water and have warned that all pipelines leak.

Last Monday, December 12th, those warnings came to life as a pipeline leaked 170,000 gallons of oil which contaminated 5.4 miles of the Ash Coulee Creek in North Dakota. That pipeline was equipped with monitoring equipment which did not detect the leak. The leak was only found because a landowner happened upon the leak and reported it.

Water protectors continue to pray and hold space as construction of the Dakota Access Pipeline construction is halted, at least temporarily. 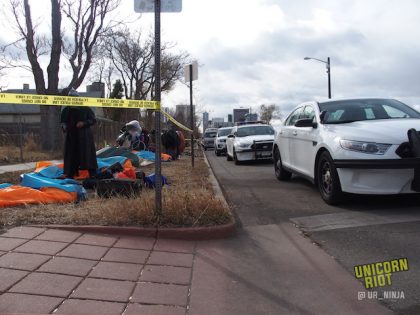 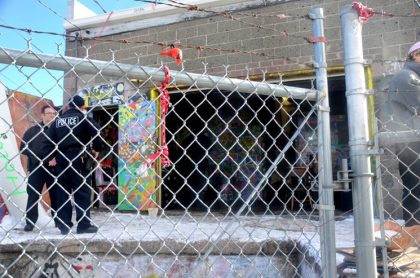