Morton County, ND – A new investigation by DeSmog and Muckrock reveals the behind-the-scenes role played by the National Sheriffs’ Association (NSA) in crafting narratives for law enforcement tasked with protecting the Dakota Access Pipeline (DAPL) from resistance by indigenous peoples and their allies.

Emails obtained through public records requests show the Sheriffs’ Association contracted PR firms Off The Record Strategies and Delve to create a media strategy for law enforcement in North Dakota, as well as researching ways to discredit and disrupt the movement which sought to stop the pipeline. At times, this involved drafting pro-DAPL talking points which were then sent directly to North Dakota law enforcement officials, who often repeated them word for word.

Leaked documents from pipeline security contractor TigerSwan had previously shown how the Sheriffs’ Association, a private organization operating with no public accountability or oversight, directly aided private military contractors in pushing pro-DAPL messaging as well as providing on-the-ground support. The National Sheriffs’ Association also played a key role in bringing out-of-state law enforcement to North Dakota under the Emergency Management Assistance Compact (EMAC). Their website lists TigerSwan as one of their corporate sponsors.

A Webinar hosted by the Sheriffs’ Association on May 7 of this year, features Cass County Sheriff Paul Laney sharing his history of the events surrounding the resistance to DAPL. His presentation, delivered to an audience of law enforcement from across the country, presents a tactical and strategic analysis of police and military efforts to end direct actions against DAPL and close the water protectors’ camps. Laney worked closely with the Morton County Sheriff and personally coordinated most law enforcement actions throughout months of direct actions, mass arrests, and contested pipeline construction. He also sits on the board of the National Sheriffs’ Association.

The Webinar, entitled “Protest on the Prairie: Law Enforcement Response and Lessons Learned” took place on May 7, 2017, and is publicly available in the National Sheriffs’ Association Adobe Connect portal.  We have reproduced a copy of it in full, which you can watch below:

North Dakota law enforcement, together with the National Sheriffs’ Association, is now presenting the tactics used by police at Standing Rock as a model to be applied nationwide. Various heavy-handed approaches to pipeline opponents are recommended, with an emphasis on combating protesters in the media – an effort at times explicitly called a “media war” or “information war.”

Versions of this talk continue to be presented as training to law enforcement audiences, with presenters sometimes including Morton County Sheriff Kyle Kirchmeier and pipeline security mercenaries from TigerSwan.

Join @CassNDSheriff Paul Laney and his amazing staff as they talk about how they dealt with #DAPL protests. Rm A13. #Sheriffs2017 pic.twitter.com/DpBL9gJ7CG

In April of this year, officials from the Sheriffs’ Association met with Nebraska’s Attorney General to discuss potential protests against the Keystone XL pipeline. Kirchmeier has also advised officials from South Dakota and Nebraska.

In his presentation, Laney stressed the importance of departments training in advance in Mobile Field Force (riot police) tactics, as well as creating “cut teams” with the know-how to disable lockbox devices used by water protectors to attach themselves to equipment.

The cut teams used in North Dakota were put together by Mandan Police Chief Jason Ziegler, who Laney said had experience in the matter from his previous work at the Osceola County Sheriff in Florida. Other “lessons learned,” presented as advice to law enforcement nationwide for dealing with pipeline protests, include officers not wearing names or badge numbers and being allowed to hide their faces. Another recommended tactic is “disruption of protester travel” – closing public roads to vehicles suspected of involvement in a demonstration or direct action. Laney repeatedly stressed his emphasis on identifying “agitators” and repeatedly blamed a “hostile militant element” of “six hundred people or so” for confrontations that occurred in North Dakota. Two such elements explicitly named by Laney were “the eco-terrorist groups out of the pacific northwest” and “the Oglala Red Warrior group.”

The other presenter in the Webinar was Mark Pfiefle of Off The Record Strategies. Pfiefle formerly worked for the George W. Bush administration to coordinate public relations responses to criticism of the Iraq war. Pfiefle celebrated the Morton County Sheriff’s series of “Know The Truth” YouTube videos as a media victory, saying the $40,000 budget for the PR videos (described by one reporter as ‘gonzo propaganda’) was a good investment as it proved its “worth to the brand of the state.” Towards the end of his presentation, Pfiefle reiterated that both himself and the National Sheriffs’ Association will continue to be available to any law enforcement agency seeking to neutralize opposition to a pipeline in their area.

“Consider us a resource of the National Sheriff’s Association. This is not the end of our activities to help and support law enforcement in areas where the pipelines could be under protest attack in the next days, months and years.” – Mark Pfiefle, Off The Record Strategies

Sheriff Laney stated “we knew there were weapons in the camp” to support his characterization of water protectors as armed and dangerous, when in fact, after the main pipeline resistance camp was evicted on February 22, Morton County Sheriff Kyle Kirchmeier said no weapons were found.

He also repeated Morton County’s claim that a media drone was flown directly at a helicopter in an attempt to crash it. Witness testimony to support this claim has repeatedly fallen short in court and felony cases against two different drone pilots have recently been dismissed. He also repeated unproven allegations that a helicopter was attacked with a “bow and arrow.”

When describing the October 27, 2016 incident involving DAPL security contractor Kyle Thompson, Laney said Thompson was ‘abducted’ by water protectors and that Bureau of Indian Affairs (BIA) “was able to get in there and rescue him.” What Laney chose not to mention was that BIA officers had actually arrived to arrest Thompson after he pointed an assault rifle at several unarmed civilians.

While denying the use of water cannons on Backwater Bridge on November 20 (“There’s not a single water cannon in the state of North Dakota”) Laney admitted that fire hoses were used on the crowd and that their use was “effective.” He also claimed that Sophia Wilansky, who nearly lost her arm in an explosion on the night of November 20, was responsible for her own injuries by allegedly rigging an IED, saying “you can see the damage she did to her arm” when showing a picture of Wilansky being transported by medics from the scene.

Eyewitnesses say officers atop an armored vehicle on Backwater Bridge threw a grenade at Sophia as she was running away from rubber bullets being shot from the police barricade. Laney then went on to claim that water protectors had been mass-producing ‘propane bombs’ to attack officers’ families in their homes. No charges against Wilansky, or any person, have been filed to substantiate these allegations. Propane camping cylinders, the alleged explosive materials, are known as being very difficult to ignite. Laney also mistakenly referred to Sophia Wilansky as “Sarah.”

A common thread between all of Laney’s remarks was a doubling-down on a pro-pipeline law enforcement narrative as well as an insistence that water protectors were misguided, and were spreading lies about the pipeline and actions by police.

“People were answering the call. They believed these social media stories that we were abusing people, and that the pipeline was this evil thing that was crossing native land and going through areas that were sacramental to the tribes and the water source was going to be destroyed. And none of that was true.” – Paul Laney, Cass County Sheriff & National Sheriffs’ Association board member

During the Sheriffs’ Association yearly conference last month, Paul Laney was awarded the NSA President’s Award for his role in putting down the #NoDAPL movement. A video recently posted to Facebook announcing the award celebrates Sheriff Laney as a hero and refers to water protectors as “obnoxious” and denounces “biased news stories” about police. (The Sheriffs’ Association has historically been very anti-protest and helped coordinate brutal crackdowns on civil rights and anti-war demonstrations in Berkeley, CA in the 1960s and 70s.)

While public outrage against police violence in North Dakota still simmers, and class action lawsuits are still underway, the right-wing bend of law enforcement subculture means that policies and practices in pipeline policing will likely remain unchanged. As the Sheriffs’ Association continues to plan for repressing future anti-pipeline unrest, Laney’s 17-point “DAPL Lessons Learned” appears poised to become an informal law enforcement doctrine to be applied anywhere in America that the oil industry calls on police to put down popular resistance.

Unicorn Riot has repeatedly tried to contact representatives of the National Sheriffs’ Association throughout the course of our reporting on the #NoDAPL movement; to this date we have not received any response. 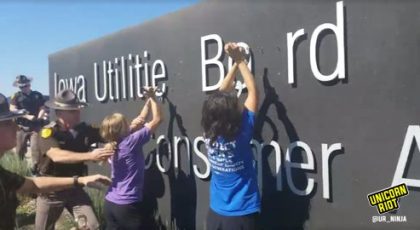 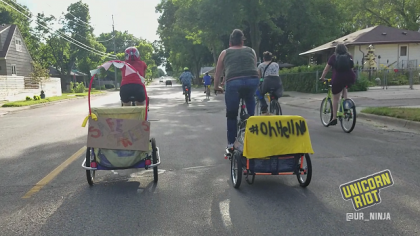