Cannon Ball, ND – On February 7th, 2017, the Army Corps of Engineers stated its intent to grant an easement to Dakota Access LLC, to cross Lake Oahe with the Dakota Access Pipeline (DAPL). The easement is north of the location where tens of thousands of people gathered to show their opposition to DAPL at a series of protest camps.

The indigenous led movement of Water Protectors saw hundreds of tribes come together to state their opposition to this fossil fuel project, and elevate the importance of clean drinking water for future generations. Once the easement is granted, which includes the Army Corps intent of waiving the EIS (Environmental Impact Statement), it’s estimated at sixty days until completion of the contested Lake Oahe crossing.

Before this announcement, tension in the area had increased as reports of officers from the Department of the Interior’s Bureau of Indian Affairs (BIA) joining active police forces in the area, and North Dakota National Guard now on the frontlines.

On February 1st, the Morton County Sheriff’s Department, accompanied by the North Dakota National Guard, removed the barriers at the Backwater Bridge and moved on a newly established treaty camp, which to Morton county was on private land, and to the land defenders, fell within the boundaries of an 1851 Fort Laramie treaty.

The camp called the “Last Child Camp” was surrounded by Sheriff’s deputies as National Guardsmen in riot gear formed a line at the entrance of the main camp. Seventy six arrests were recorded in the camp, including journalists.

Those arrested included journalist Jenni Monet who stated she was complying with police orders when arrested.

The arrests on February 1st bring the total number of arrests related to DAPL since August 2016, to over 700.

I'm free from jail, facing 5 years in prison. I love you all. Thank you to all water protectors who've sacrificed liberty for all. #NoDAPL

Despite the recent granting of the easement, the Standing Rock Sioux Tribe announced its intent to legally challenge any reversal to the EIS process, which has already officially started.

On January 17, three days before the Trump administration took office, the Department of the Army, published in the Federal Register their formal intent to conduct a full Environmental Impact Statement regarding the DAPL easement to drill under the Missouri River.

“If and when the easement is granted, the Standing Rock Sioux Tribe will vigorously pursue legal action. We have to this date received no formal notice that the EIS has been suspended or withdrawn. To abandon the EIS would amount to a wholly unexplained and arbitrary change based on the President’s personal views and, potentially, personal investments. Furthermore, the Army Corps lacks statutory authority to simply stop the preparation of the EIS and issue the easement.” – Standing Rock Sioux Tribe

Meanwhile, the federal government has sent in more BIA agents. The bureau is a federal agency established in 1824 for controlling federal programs in Indian Country.

Recently, the BIA, accompanied by the Standing Rock Sioux Tribal Council and members of the Army Corps, and staff from the Department of Justice’s Bureau of Alcohol, Tobacco, Firearms and Explosives (ATF), “assessed” parts of some of the camps around Oceti Oyate (formerly Oceti Sakowin). Specifically, they entered Rosebud and Sacred Stone camps as the authorities prepare for a February 22nd eviction date.

“Then they came for our Sacred Stone Camp, the original spirit camp we built to lay our prayers and our water from the Dakota Access Pipeline. But this time, they were accompanied by the Standing Rock Sioux Tribal Council. They had no warrant, but they forced their way onto my private land, my family’s land, where I grew up on the banks of the Cannonball River. It was our own council members together with the Standing Rock Fish and Wildlife Service, the Bureau of Indian Affairs (BIA), the Bureau of Alcohol, Tobacco, Firearms and Explosives (ATF), and the US Army Corps, all seeking to evict me from my homeland.

The world wants to stand with Standing Rock, but Standing Rock stands against us. Chairman Dave Archambault threw our people to the dogs when he said the camps’ actions “…do not represent the tribe nor the original intent of the water protectors.” He forgets that we at Sacred Stone Camp were the first to stand up for the water, and that we stand with all the camps who have joined our struggle…

Historically, our people’s resistance has been repressed with bloody battles and massacres — but also by the hands of Indian collaborators. Our relatives did not see who the enemy was, because it was their own relatives who turned against them, enabled by the same kind of lies from the same kind of corporate media.

Our traditional leaders were forced aside by the Indian Reorganization Act of 1936, when federal authorities forced the establishment of tribal councils on the reservations. This is a colonial system of government with no basis in Lakota/Dakota/Nakota culture or teachings. It is the same tactic they used with the Indian agents and the Hangs Around the Fort betrayals. They fabricate a leader that will allow them to take what they want from us. The hunger for power can divide a people…

Like Red Cloud and Spotted Tail, and the other “agency” Lakota who so quickly surrendered our lands and way of life while thousands fought back alongside Sitting Bull and Crazy Horse, today our tribal council has misunderstood what is really at stake…” – Ladonna Brave Bull Allard, To Save the Water, We Must Break the Cycle of Colonial Trauma

Despite threats of eviction and an even more increased militarized force that has the BIA joining the policing of water protectors gathered to defend the Missouri River, some have sworn to stay to protect the water.

Intent to grant easement statement below. 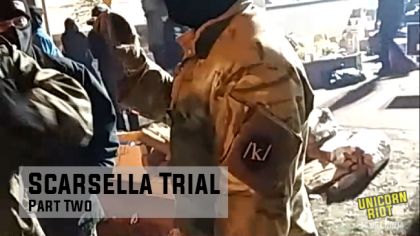 Scarsella Trial – Part Two: “In hindsight it was very stupid” 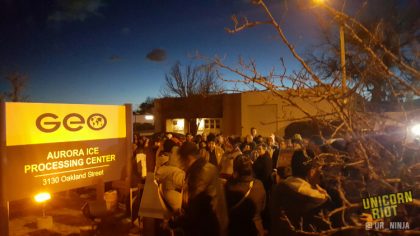