Minneapolis, MN – Two days after Sunday’s high-profile #NoDAPL banner drop at US Bank Stadium during the Vikings game, we spoke with one of the participants regarding the #DefundDAPL campaign that led to the 10 foot by 40 foot banner reading “US Bank DIVEST #NoDAPL” being unfurled on Sunday. The campaign encourages financial backers to withdraw their investments from the Dakota Access Pipeline and states that over $43,882,456.55 has already been divested to date.

Sunday’s banner drop was witnessed by thousands and documented by Unicorn Riot, see the video below:

Three people were arrested on probable cause burglary charges in relation to the banner drop. After a judge reviewed their cases, all three have since been released with no charges, though the participants in Sunday’s action anticipate that further charges may still be filed against them.

Unicorn Riot spoke with Karl, one of the two climbers, on Tuesday, January 3rd outside of the US Bank Stadium immediately following their press conference, which Unicorn Riot livestreamed.

We spoke to Karl about what led to the banner drop, the #DefundDAPL Campaign, the experience of climbing the ladder and rappelling down from the catwalk, what the two climbers did while hanging from their anchor points, the response from the crowd and the authorities, the time that Karl spent in jail, and more.

The press conference that occurred prior to the above interview was held in below-zero temperatures on the corner of 5th Street and Portland Avenue Tuesday, January 3rd, in downtown Minneapolis. The massive new US Bank Stadium in which the direct action took place can be seen in the background.

The two climbers started the conference with statements related to the divestment campaign and the Dakota Access Pipeline.

“This pipeline is not a unique circumstance. The native communities have been facing land theft, resource extraction and the destruction of their homelands for more than 500 years.

The Dakota Access Pipeline is just one of many threats faced by native communities across the country. The people who have settled this land have long violated treaties and Indigenous rights. From listening to Indigenous communities we know the pipeline is not wanted by the Standing Rock Sioux just as we know the pipeline threatens drinking water and sacred sites.” – Sen

“The Standing Rock Tribe faces a huge threat to its land and its people. The US Army Corps of Engineers denied the permit to drill under the Missouri River. However, with the incoming presidential administration, the threat is not gone and our fight is hardly over.

US Bank has invested millions of dollars in this infrastructure project. In their stated code of ethics … US Bank has high ethical standards and they hold that above all else.

This pipeline is not ethical. It is far from ethical, it is the opposite of ethical. We must hold US Bank to their own standards and demand that they withdraw from the pipeline now.

Thousands of people have joined this campaign from the US and around the world. We invite everyone else to join this campaign as well.

Historically, this country has not listened to Indigenous people, and I am excited because it sounds like people are starting to realize that and they want that to change.

The Standing Rock Sioux have said no to this pipeline, let’s stand behind them.

If you’re interested in getting involved with thousands of people who’ve already joined this campaign, you can visit our website mplsnodapl.weebly.com or standingrock.org. There is a button to click if you want to donate funds. I’m open to questions.” – Karl

Once they had given their statements, they took questions about divestment and DAPL from mainstream press in attendance. The majority of press focused more on questions regarding details around how Sen and Karl were able to bring in the banner and equipment, which Sen and Karl did not answer (as instructed by their lawyer). Instead, they redirected their answers to the #DefundDAPL campaign itself that led to the action.

In our interview with Karl after the press conference, we asked him about the campaign that inspired this banner drop.

“Well, this action is just one of many that happened so far this month. There’s been a number of protests, sit-ins, lockdowns, singing choirs going around, flyering. This one happens to be very high profile. We just got together with a group of friends and neighbors and thought about what we wanted to do, looked at our skill set, and applied it. And anyone can do that.

We don’t have, we didn’t need anyone’s permission or anything to be like that, we just got together and said hey what do we want to do, let’s look at how we can do it, and we made it happen.” – Karl

To watch the press conference in its entirety, please see below: 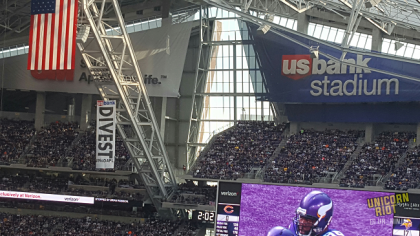 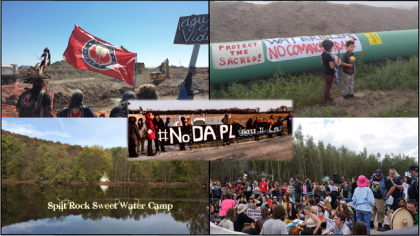