Lee County, IA & Morton County, ND – Three Unicorn Riot journalists who were arrested and charged with criminal trespassing while documenting #NoDAPL direct actions have had their charges dropped in court dates set for the first three days of March.

During a trial on March 2 in Morton County, North Dakota, assistant state’s attorney Brian Grossinger was unable to get charges to stick for Unicorn Riot journalist Chris Schiano when Brendan Nix, an employee of DAPL security contractor 10-Code LLC and the prosecution’s witness, was unable to positively identify any defendant as having been notified that they were trespassing at a pipeline work site on September 13.

This inability to identify alleged trespassers led the judge to conclude that the state lacked adequate evidence to prove criminal trespass occurred on September 13, which then led to an acquittal for Chris Schiano as well as for Dale American Horse Jr., a water protector also arrested that day whose case had been enjoined with Chris’ by the court.

Charges were then also dropped for Niko Georgiades, another Unicorn Riot journalist, as well as several other water protectors facing charges from September 13. They had been scheduled to go to trial on Friday, March 3.

Brendan Nix’s employer, 10-Code LLC, came under scrutiny last year for their connection to the September 3 incident in which pipeline security contractors from another firm unleashed attack dogs on water protectors. We attempted to interview 10-Code Security at their Bismarck office in September, but were turned away without receiving any comment from their staff.

In total, four Unicorn Riot journalists were arrested while reporting on resistance to the Dakota Access Pipeline in both North Dakota and Iowa.

The Committee to Protect Journalists (CPJ) and The Intercept have covered the targeting and arrests of our journalists; and the subsequent implications for freedom of the press.

CPJ also wrote a letter to Morton County State’s Attorney Allen Koppy calling for the criminal charges against independent journalists to be dropped.

We at the Committee to Protect Journalists, an independent press freedom advocacy organization, along with the organizations listed below, write to request that the Morton County State’s Attorney’s Office drop the charges against journalists arrested during protests over the Dakota Access Pipeline or justify the arrests of reporters in the course of their work.

CPJ has documented at least 10 journalists still facing charges in relation to the protests, including nine in Morton County. Two of the journalists–Christopher Schiano and Nicholas Georgiades, from the nonprofit media collective Unicorn Riot–face trial on misdemeanor criminal trespass charges today and tomorrow respectively. Police arrested them September 13 while Schiano and Georgiades were filming protesters who had locked themselves to construction equipment. In a video of the arrest, one of the journalists can be heard saying, “I’m press, sir. I’m press.”

Other journalists still facing charges include freelancers Sara LeFleur-Vetter, Jihan Hafiz, Adam Schrader, Jenifer Stum, and Jenni Monet, and Lorenzo Serna, from Unicorn Riot, and Myron Dewey, from Digital Smoke Signals. On February 28, five press freedom and journalist groups, including CPJ, sent a letter to your office asking that it return equipment to freelance photographers Tonita Cervantes and Tracie Williams, who were arrested last week and still face charges. We are glad to hear that their equipment was returned to them yesterday.

At least five of the journalists facing charges, with whom CPJ spoke, said they were arrested despite attempting to follow police orders to disperse or remain behind police lines. Monet said in a column for Columbia Journalism Review that she was arrested while following an officer’s order to leave an area where protests were taking place.

Most of the journalists facing charges are freelancers or from smaller, independent outlets that lack the resources to pay attorney fees or mount a public defense for the reporters. The fact that these journalists do not have the backing of large media companies may make them more vulnerable–but it does not lessen their First Amendment protected right to report the news.

Journalists have an important role in documenting incidents in the public interest, including instances of civil disobedience and law enforcement operations. This role often draws them near to the scene of action. Trespass and rioting laws should require criminal intent, and journalists who are simply doing their job should not face criminal charges.

Prosecutors and the courts often use discretion to avoid charging journalists arrested at protests. There is recent precedent for this: the U.S. Attorney for the District of Columbia announced that it dropped charges against at least six reporters who were swept up in arrests on inauguration day in Washington D.C.

We are concerned that the arrests of journalists can have a chilling effect on press freedom and discourage media from covering stories that are in the public interest. In the case of Standing Rock, several journalists told CPJ they have shied away from covering protests or getting too close to police action to avoid being arrested again. While we acknowledge that journalists are sometimes temporarily detained in emergency situations, a case where several journalists face criminal charges for simply doing their job is unacceptable.” – CPJ Letter

To view the reports (filled with media) from dates on which our reporters were arrested while producing #NoDAPL coverage, see below: 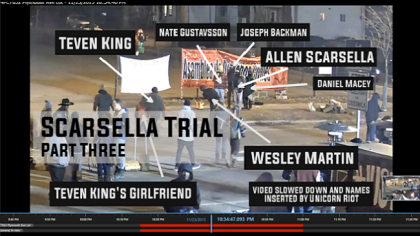