At the festival we interviewed anti-racist organizer Daryle Lamont Jenkins about how keeping a music scene open to everyone means protecting the space from people advocating violence against marginalized groups.

Every band on the festival lineup condemned the neo-nazi black metal sub-genre of NSBM, National Socialist Black Metal. This festival was open to everyone who rejected right-wing extremism and NSBM, with the goal of cultivating an anti-racist space in opposition to bigoted elements in metal subcultures.

NSBM has been linked to several recent hate crimes. The white 21-year-old sheriff’s deputy arrested for the arson of three historically black Louisiana churches is reportedly a fan of black metal. The suspected arsonist posted to Facebook about violent neo-Nazi metal musician Varg Vikernes, according to evidence obtained by the Southern Poverty Law Center.

Vikernes is perhaps the most infamous name associated with NSBM and neo-nazi metal music. He is responsible for three church burnings in Norway as well as the fatal stabbing of metal guitarist Euronymous. Since his release from prison Vikernes and his one-man Nazi black metal band Burzum have become a symbol uplifted among the more violent elements of the alt-right. Neo-nazi Discord chats leaked by Unicorn Riot contain over 900 positive references to Varg Vikernes and Burzum, and many posts contain memes celebrating him as an almost godlike figure.

Anti-fascist journalist Kim Kelly is responsible for the creation of Black Flags Over Brooklyn. Kelly has been involved in the metal scene since age 11 and wanted a show that “combined the music I love with the politics I live by.” She said she was inspired by an anti-fascist music event overseas to foster a similar show in Brooklyn, organizing a lineup of 15 bands over two days and a concurrent all-day market in the downstairs space on the second day.

Kelly gave thanks publicly to everyone who had helped organize the event. She considered the festival well worth the six months of organizing work.

“This means so much to me, as a metalhead and as an anti-fascist, as an anarchist, as somebody who gives a fuck, to see so many people. There are hundreds of people here, who came out on this fucking cold-ass weekend in January, to celebrate the things that bring us together, and to celebrate the things that make us better! […] And what we’re building here, I think, is the best of what heavy metal has to offer.” – Kim Kelly, Black Flags over Brooklyn festival organizer

On day one of the festival attendees traveled to Greenpoint, the northern-most neighborhood of NYC’s Brooklyn borough.

Inside the Bazaar the upstairs main hall was lined with band tables offering albums and other merchandise. Unicorn Riot interviewed members of parody black metal band Neckbeard Deathcamp about the anti-NSBM movement and the first Black Flags festival.

The band members agreed that it is impossible to separate art from the person who created it. “The art is a direct result of the artist. It comes from the artist themselves.”

“You can say that you wanna listen to it [NSBM] for the riffs all you want, but at the end of the day, Nazis still have a shitty goal in mind.” – Neckbeard Deathcamp

(Recently the conversation about art vs. artist is resurfacing surrounding the killer responsible for the mass shooting on August 4, 2019 in Dayton, Ohio. The shooter has been identified as a member of a misogynistic band who makes music about raping and slaughtering women. The gunman killed nine people, including his own sister, and injured over ten more. Neckbeard Deathcamp disavowed the shooter as a “scene rapist” tweeting on August 5, “For what it’s worth men who cape hard line “””””left””””” politics who still treat women like shit are not exactly a new invention.“)

Extreme metal and hardcore punk band Racetraitor took the stage the first day. Vocalist Mani Mostofi acknowledged that the majority of the audience had likely never heard of their group. He explained to the crowd, “We took that name ‘race traitor’ from the Nazis; we took it back. We say there’s no better thing to be […] because joy is ours, and violence and despair is theirs.”

First formed in 1996, Racetraitor’s music centers anti-colonialism and anti-racism. The band had been inactive since 1999, re-forming in September 2016 in order to respond with their art to the rise of xenophobia and bigotry.

Mostofi, who is Iranian-American, told concert-goers that successfully combating racism and fascism requires cooperation across barriers such as the Muslim ban. “It’s gotta be listening to people of color in this country, queer people, poor people, women […] it’s what solidarity means and, more importantly, what action means.”

Mostofi also warned that nationalistic violence is rising in U.S. America as well as in Brazil and in India.

“We’ve all been told every day to benefit and stay quiet when people are oppressed, exploited, face violence, face poverty. That shit has been normalized. But at this show, it’s no longer fucking normal.” – Mani Mostofi, Racetraitor

Near the festival entrances a booth had been set up by the Awareness-Support Corner (ASC). The group’s mission is “To help create safer space communities at shows, venues, and events in NYC.” Black Flags attendees were made aware of the ASC during the festival introduction, and asked to approach the group if they perceived any threats during their time at the Brooklyn Bazaar.

(ASC reported that no harassment took place that they had been made aware of. After the festival’s end they re-tweeted an attendee’s grateful message to the event organizers, “last night at @blackflagsovrBK was the first time i felt at home in the scene i have loved since i was 15.“)

We interviewed Daryle Lamont Jenkins on the second day of the festival about the history of anti-fascism in extreme/peripheral music scenes. Jenkins is an anti-racist organizer and founder of One People’s Project which keeps tabs on alleged racist and far-right groups and individuals.

Jenkins, whom we have interviewed before (1, 2, 3) spoke this time on the history of music lovers dealing with Nazis in their scenes. He identified music scenes as a source of politically-motivated action, elaborating, “Before I am anti-fascist, I’m in the scene; the punk scene, music scene in general, the punk culture.”

He noted how the Proud Boys, who had grown out of Brooklyn, had made unsuccessful attempts to co-opt “decidedly anti-racist” hardcore punk band Sheer Terror.

Atomwaffen, a militant neo-nazi group tied to several murders and terror plots across the US, makes heavy use of black metal symbolism. While the group avoids most public events for security reasons, their leader John Cameron Denton (aka ‘Rape’) and his associates are known to come out to black metal shows. PBS Frontline’s ‘Documenting Hate: New American Nazis‘ shows reporter AC Thompson confronting Denton and other Atomwaffen members last year at a metal club in the Houston, Texas area.

Jenkins also mentioned how Boston’s straight-edge group “Friends Stand United” a.k.a. “Fuck Shit Up” (FSU) fought similarly on behalf of the Boston scene. Both FSU and ARA grew out of the hardcore punk subculture.

The ground-floor hall at the Brooklyn Bazaar had been transformed into a small vendor market and anarchist bookfair for the second day of the festival.

The space was filled with tables set up by leftist book publishers, record labels, zine-makers, artists, and local radical organizations. Artists who performed on the Black Flags lineup had space here for their other projects. One such vendor, Vegan Foxie Cosmetics, was Kayla Phillips of Pulsatile Tinnitus and Bleed The Pigs.

The entire back wall was devoted to the revolution in Rojava, an independent Kurdish canton that stands for women’s liberation, democracy and ecology. Rojava is defended by the Peoples’ Protection Units in defense of Rojava (YPG/YPJ) and the Syrian Democratic Forces (SDF). Multiple banners were hanging representing the revolution. One flag read “Jin Jiyan Azadi [Women – Life – Freedom]; Defend Afrin, Destroy Fascism“.

Tables below the banner were covered with free feminist and anti-fascist patches and artwork. There were pamphlets about the Rojava revolution, the Peoples’ Protection Units, and the International Freedom Battalion of the YPG. Flyers were present also for a Rojava solidarity rally that had been scheduled to take place the next day, on International Kobane Day.

The intersection of anti-fascism and militant feminism is exemplified in the YPJ, the female-only branch of the Rojava Peoples’ Protection Units. “Feminist fighters defeating fascism and patriarchy” was the title of one informational flyer.

While the 2019 Black Flags show was the first antifa metal show in North America, metaleros in South America have been organizing explicitly anti-fascist, anti-nazi metal festivals since 2011. User Red&AnarchistMetalHeads posted on antifa Bogotá’s website about the public’s generalization of all black metal as the NSBM sub-genre. They wrote of the existence of leftist heavy metal that combats fascism, saying

In her closing address to the crowd, Kim Kelly spoke to the importance of standing by one’s personal/political beliefs in order to foster a better, more meaningful world. She said,

Mostofi from Racetraitor had urged people to “take the spirit [of the festival] into the streets” and to show up “when people of color are facing violence, when immigrants are being deported”. Vocalist Lex for band Sunrot reminded everyone of the need for “fellow white-passing people” to “use your privilege for the better.” Lex spoke about how the queer community enjoys rights as a result of riots led by some of the people most persecuted for their membership in that community. A 2016 study on homicides of LGBTQ people found that 61% of the reported hate-related homicides were of transgender women of color.

When asked about plans for another anti-fascist USA music festival in 2020, Kim Kelly told us,

“I don’t want to share too many details just yet, but we are already planning Black Flags 2020… and this time, we’re taking our anti-fascist metal party on the road!” 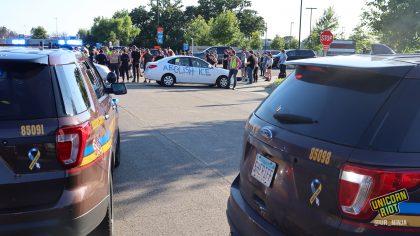 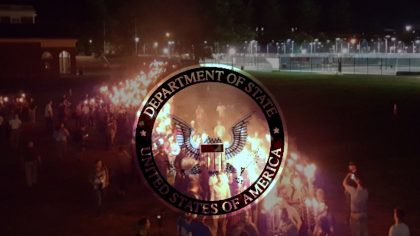