St. Paul, MN – A public performance commemorating the toppling of the Columbus Statue at the Minnesota State Capitol in 2020 is set for Saturday, April 23 at 4 p.m. Unicorn Riot will be covering the event and media from the performance will be posted here.

Unveiled by the Midway Contemporary Art and headlined by artist Karthik Pandian, American Indian Movement member Mike Forcia, as well as an ensemble of Twin Cities based musicians, dancers, media workers, and activists, the free and open to the public performance will start at the Minnesota State Capitol and proceed into Lowertown St. Paul for its finale.

View the teaser for ‘In The River’ below:

This page will be updated.

In the midst of a nationwide cleanse of racist monuments, the Christopher Columbus statue at Minnesota’s Capitol building was taken down on June 10, 2020. Over a hundred people came to take part in toppling a statue of one of the most widely-revered purveyors of colonialism and genocide. After a rope was tied around the statue’s neck, people pulled together on both sides of the rope to rip the statue from its pedestal.

Mike Forcia, Bad River Ojibwe, would later be charged for felony destruction of property as the organizer of the event, but would agree to a suspended prosecution where he would deliver 100 hours of community service in exchange for the dismissal of all charges against him.

IN THE RIVER is described as intertwining Indigenous prophecy, Black music, and stories of survival to challenge the colonial monument’s claim on space and time. It is centered around the Indigenous-led takedown of the Christopher Columbus monument outside the Capitol building in June of 2020. That summer, following the murder of George Floyd, activists were moved to topple many similar statues around the world including a Columbus Statue in Boston that was beheaded, and Richmond that was thrown into a lake.

The performance is conceived and directed by artist Karthik Pandian. Pandian works in film, sculpture, performance, and public interventions to deconstruct colonial narratives and imagine new futures using the tools of ceremony, mythology, and ritual. He is an Assistant Professor of Art, Film, and Visual Studies at Harvard University.

For the past year, Pandian has worked closely with local Indigenous activist Mike Forcia (Bad River Anishinaabe), who orchestrated the take-down of the Columbus monument. Together, they have assembled an ensemble of Black, brown, and Native performers, activists, and media workers to revive and redirect the energy of that day into theater, dance, and music. IN THE RIVER features instruments, composition, and music by Douglas R. Ewart and Lakota “Hokie” Clairmont, performing together publicly for the first time, as well as choreography co-created with Sam Aros Mitchell, Leila Awadallah, and Lela Pierce. It also features an adaptation of “The Seven Fires”, an Anishinaabe prophecy recorded by American Indian Movement co-founder Edward Benton-Banai.

The performance and festivities on April 23 will commence at 4pm at the Capitol in St. Paul on the site where the Christopher Columbus monument once stood. It will proceed down Cedar Street to an ADA accessible space in Lowertown, St. Paul. ASL interpretation will be provided. Visitors are encouraged to wear comfortable shoes and to bring a face mask for the inside portion of the event. We encourage visitors of all backgrounds to attend; for directions and more information, see https://www.midwayart.org/event/in-the-river/ 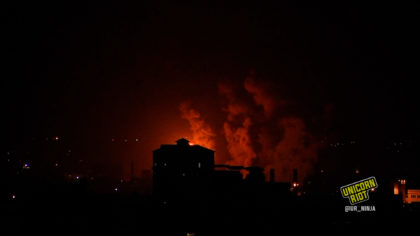 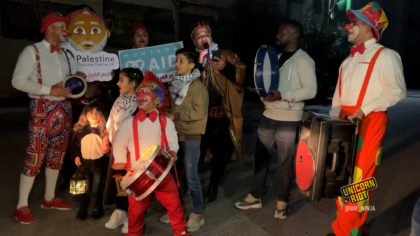