The Hambach, like many forests around the world, faces total destruction at the hands of expanding fossil fuel infrastructure. The open-surface mine threatening this forest is owned by RWE, the coal giant operating many mines in Germany, including sites targeted in the previous weekend’s Ende Gelaende action.

What makes the Hambach Forest special is that it has stood for hundreds of centuries, making it the oldest forest in Germany. RWE acquired the land on which the Hambach Forest stands in 1978 with the intention of clear-cutting the entire area to build another mine. At the time, Hambach spanned 13,590 acres. As of 2018, the forest had been clearcut to under 1,359 acres, or less than ten percent of its size in 1978.

From within the Hambach, climate activists are also engaged in direct action to protect the ancient old-growth forest. Forest defenders have built a series of treehouses and other blockades that have delayed clearcuts for six years.

Unicorn Riot spoke with Tempest, a forest defender living at the Hambach occupation, from inside a two-story treehouse that was still under construction.

Tempest described what it was like to hold space in what is left of the ancient forest, knowing that other humans plan to demolish it to continue mining unsustainable energy. They also said that the Hambach Forest had become a symbol of the anti-coal movement in Germany.

“It’s a special forest I would say. You don’t find this combination of trees actually in many places. This is the forest that has been occupied for six and a half- seven years. Where people have stood against the expansion of the biggest open pit coal mine in Europe.” – Tempest, Hambach Forest occupier

In September 2018, thousands of police mobilized to evict occupiers from portions of the Hambach Forest to further expand the coal mine. The police action resulted in the death of a journalist and injured many activists. Since then, occupiers have continued to rebuild their treehouses and vow to hold the line against the RWE coal mine.

RWE’s open pit lignite coal mine has also displaced entire villages that surrounded the mine, as the massive machinery continues to strip away the top layer of the soil and gobble up the surrounding land.

While covering #endegelände in #Germany we learned about villages, like #Manheim, that have been displaced and are being destroyed by #RWE’s expanding #coal mine. Read more: https://unicornriot.ninja/2019/direct-action-shuts-down-coal-infrastructure-in-germany/

According to RWE, the entire Hambach forest must be demolished for the coal mine to continue growing. When we asked Tempest about their tactics to defend the forest they said,

“We are fighting against the corporation that is destroying our planet and we believe that protests are less effective than direct action. We, as a group, believe that if you have something that you want to change in the world, you should just go ahead and work on changing it and do something. You can in solidarity with other people protect the very earth under your feet from destruction.” – Tempest

They also told us that the mine had drawn so much water that the ground water was 400 feet deep now and no tree’s roots could reach it. The mine has drawn so much groundwater that it now pulls in water in from across national borders. “Essentially, Germany is stealing water from [the] Netherlands.”

Our team of journalists spent the night at the ‘Lluna’ barrio, one of the many community neighborhoods of occupied structures erected in the forest. The Lluna barrio is a vegan and anti-speciesism space, meaning that the land defenders occupying the trees oppose hierarchy and see all species as equal and deserving of the same respect.

Hambach Forest, Germany: ‘Lluna’ is one of the many barrios set up by land defenders occupying the ancient old-growth forest to stop it from being clearcut to expand a massive coal mine.

See our 2017 report for more context on the #Hambach struggle: https://t.co/evUiG4FeGq pic.twitter.com/36oHwJWkpX

Tempest also told us that there were probably around ten neighborhoods like ‘Lluna’. They said,

“Each of them is a group that builds together and lives together and cooks together and every barrio is different than the other. Our concept is we occupy trees and fight against climate change. And also promoting anarchy and autonomous zones and yeah, anti-hierarchy.“

A series of treehouses, blockades, and other fortifications have been set up to protect the #HambacherForst

Thousands have traveled to camp here over the years, with many people living permanently on-site to maintain a full-time land defense operation. pic.twitter.com/FELFAW2TrI

When we left the Hambach, it was in no way certain that the forest’s defenders would stop the RWE coal mine expansion. The only thing that seems clear is that when RWE returns to destroy the forest, there will be people in the trees waiting to hold the line. 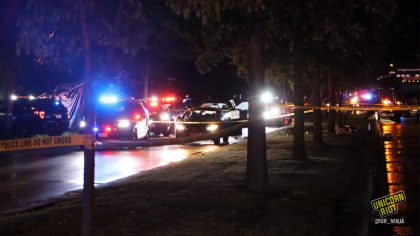 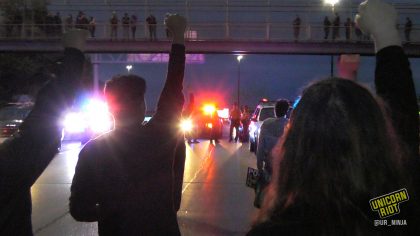