Roseville, MN – Dozens of family members from across the United States gathered in Minnesota in March for the third annual weekend of events honoring Cordale Handy and other victims of police terror and community violence.

As family members continue to mourn the loss of each loved one, a space is provided during the weekend for members of this community to grieve, cry, share, celebrate, and honor the victims.

A press conference and vigil was held on Friday evening. On Saturday, a support group called Lift Every Voice and the 2020 In Remembrance of Me Banquet were held and a Sunday fellowship breakfast were the main events. For the last three years these events have taken place in Roseville, Minnesota.

The banquet was hosted by the Cordale Q. Handy In Remembrance of Me Foundation, created by Kim Handy-Jones after her son Cordale was shot and killed by St. Paul police officers Mikko Norman and Nathaniel Yonce in March 2017.

“Our children’s lives have been stolen. We didn’t sign up for this. It chose us.” — Kim Handy-Jones

21 victims of police killing were honored at the banquet, along with one victim who died after an interaction with police and one who died while in jail. Four victims of community violence were also honored.

Seven certificates for headstones were presented to family members of victims, a key tradition of this event.

Nearly 40 family members of victims of police terror attended the banquet, where over a dozen of them gave speeches. Spoken word artists, dancers, and youth singers all performed in honor of the lost loved ones.

Watch the full 2020 ‘In Remembrance of Me’ Banquet below:

The annual banquet has grown in size with each iteration; this year over 200 people attended the event. Unicorn Riot has covered every banquet, first in 2018 and returning again in 2019.

“I dont think there’s anything like it anywhere“, said Monique Cullars-Doty during the keynote. She stressed the uniqueness of all those people being the same space to celebrate their loved ones.

She spoke about the importance of the banquet and weekend of coming together and called it really good “self-care.“

“On this day, because of Cordale Handy, there is so much that is coming out of that tragedy because Kim has chosen to turn it around and do something positive and extraordinary and something unique and something beautiful.” — Monique Cullars-Doty

After the keynote speech, a handful of mothers who’ve lost their children to police graced the stage and were given a few minutes to speak their minds. See the speeches by Pamela Brooks, Gwen Carr, Ayanna Johnson, Yolanda McNair, and Lisa Simpson below:

The yearly tradition of the banquet and a main mission of the Cordale Q. Handy Foundation is the giving away of headstones for victims. Headstones cost around $900; many families do not have a thousand dollars saved up for such an occasion.

The idea of the headstones was “a vision from God“, said Kim Handy-Jones. She said she was at Cordale’s gravesite and looking at his headstone and was struck with the realization that many mothers don’t have a gravestone for their child.

The amount of headstones given by the foundation keeps growing as it continues to get support. The foundation she formed in honor of her son is one of the only in the world that gives headstones to families in need.

The following list, in alphabetical order, includes all the victims of police terror that were represented by family members at the banquet along with a short summation of the incident and if any accountability happened. Many family members in this community have turned their pain into power in their specific regions, building support groups and pushing for police accountability, some of which are listed below.

Of the next two victims represented, the first died in jail and the other died after a run-in with police.

The Racial Justice Network (RJN) has played a pivotal role in organizing the banquets. RJN has provided volunteers, rides for mothers to and from the airport, and played many other support roles. Among the other groups who helped organize the 2020 banquet, were Communities United Against Police Brutality, Twin Cities Coalition 4 Justice for Jamar, Black Lives Matter Minnesota, Black Pearl, and Love, Hope & Healing Counseling Services.

Friday night’s vigil and memorial event was held in the basement of Indigenous Roots Cultural Arts Center, just a block from where Cordale Handy was shot and killed by police in St. Paul. Over 100 people were in attendance and speeches were made by numerous family members of lost loved ones and activists. Trahern Crews, the uncle of Hardel Sherrell, emceed the night along with Monique Collars-Doty, the aunt of Marcus Golden.

During the memorial, Crystina Page shared the story of her son, David Page, being killed by police in Monument, Colorado and how it changed her life and viewpoints. She spoke about the incident, how her son was killed, and how badly the police treated her family.

Page said she organized a ‘Back the Blue’ (pro-police) rally just years prior to her son being killed by police and the negative experiences her family endured during this tragedy has altered her formerly positive point of view of the police.

LaToya and Alice Howell also spoke during the Friday memorial. They discussed how the Chicago police killed LaToya’s son Justus Howell, the steps the police took to cover up the killing, and some of the things they’ve had to go through since.

The night ended outside in sub-freezing temperatures with a balloon release at the site of Cordale Handy’s death.

After the weekend of events, Kim Handy-Jones called the mothers “a tower of strength“, “gladiators”, “irreplaceable“, and “a special kind of women“. She reveled in the magnitude of the strength that the mother’s and family member’s have for going through so much trauma and turmoil.

“It takes a special type of mother to be able to withstand and endure the trauma and the hurt and the pain that we’ve had to endure.” — Kim Handy-Jones

As the years go by and the list of grieving mothers grows, so does the massive support circle powered along in part by each of the family members mentioned in this article and in their communities.

“These mothers have been standing on the front lines with open arms and we hope and pray always that we don’t have to grab another mother’s hand but it’s almost inevitable because police brutality and community violence are at an all-time high.” — Kim Handy-Jones

The bond, love, and community that these family members have created through events like the ‘Remembrance’ banquets that Handy-Jones started, sparks connection and togetherness that is not only helping these family members grieve, but is building relationships that are likely to lead for a lifetime.

“Sometimes you can’t sleep at night – you can always call that phone and if not all of them answer…you’re gonna get four or five that answer you.

When the rest of the world is sleeping, we’re somewhere grieving, our minds never stop. It never shuts down. We just keep going.” — Kim Handy-Jones

As this loving community unwantedly grows, it still represents a minority percentage of family members dealing with the grieving process of having their loved ones killed by police. There are a lot of family that do not talk about the situation for many reasons. While Handy-Jones has been outspoken since her son’s death, she said they must be the “voice for the voiceless” when other mothers and family members can’t or won’t talk.

To build the community that these mothers have built, Handy-Jones said it took them coming together collectively and “keeping [their] boots on the ground.“

This year’s banquet came during a time that the coronavirus was starting to spread across the U.S. and before any of the Stay At Home orders were given. Some mothers and family members didn’t come because of the crisis. For the family and mothers that came, many said the impacts that the weekend of events had on them emotionally outweighed their fear and risk of the virus.

“I’d walk through coronavirus for my son. I really would. And I saw a lot of mothers that would do the same.” — Kim Handy-Jones

While the list of victims of police terror continue to rise, police accountability continues to be lacking. Yet, Handy-Jones still has hope in the idea of justice; “We may not get there today but justice delayed does not mean justice denied. If we keep coming and standing on those frontlines, we’re gonna get a breakthrough. We’re gonna push through.“

Continue to follow Unicorn Riot for further content contextualizing the impacts of police killings. Stay tuned for our upcoming documentary on mothers who’ve lost their children to police terror tentatively – planned for a later 2020 release. 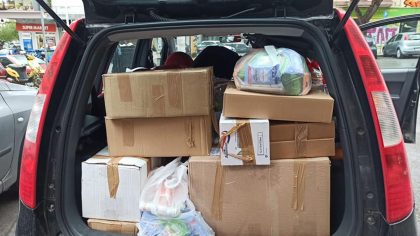 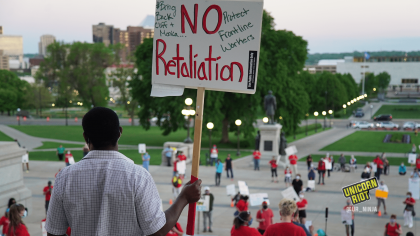 Nurses Picket Over Lack of Protection From Ongoing Viral Pandemic