After many years in hiding, on Dec. 18, 2022, the far-right, neo-Nazi organization of Golden Dawn (GD) made its public reappearance and organized a march and rally in Florina, Northern Greece. Dozens of Golden Dawn members, many serving in the Greek Parliament, were convicted in 2020, in the largest Nazi trial since Nuremberg, of heading a criminal organization.

Located in the northern Greek region of Western Macedonia, Florina is considered a nationalistic stronghold due to its border with the state of North Macedonia and the existence of a Slavic-speaking population in the area.

Last month, GD called for the nationalist demonstration after the approval* of the certification of the “Macedonian Language Center in Greece” as an official NGO in Greece. The Macedonian Language Center is a cultural center that teaches the official language of the neighboring state of North Macedonia, which is referred to as “Macedonian language.” Greek nationalists have rallied around the Macedonia issue in recent years and GD attempts to use it as a political asset, trying to organize forces around the issue of Macedonia’s name and cultural heritage.

*On Dec. 29, 2022, the District Attorney of Florina objected to the decision to grant NGO approval for the Macedonian Language Center in Greece. The appeal hearing is scheduled for Feb. 2, 2023.

Golden Dawn’s gathering was also promoted by international radical right channels on Telegram, with one of them stating: “Golden Dawn is not dead,” while the nationalist channel “Hellas Youth” reported that, “A new Macedonian Struggle is rising with the movement of Greek Nationalists, with GD being once again in the vanguard.”

Anti-racist collectives, student associations and leftist political parties responded to the nationalist demo with a counter-protest, showing their opposition to the reappearance of the fascist threat in the city.

To understand from a protester’s perspective why they were there to counter GD’s gathering, Unicorn Riot heard from Eirini, a member of the left-wing organization ANTARSYA, who participated in the antifascist protest.

Eirini stated, “GD’s public call for the rally had been announced a few weeks earlier. It was an attempt to reorganize its forces on the occasion of the approval of the ‘Macedonian Language Center.’ There were about 150 fascists, a lot of which had come from Thessaloniki, and police’s presence was heavy, to make sure that there won’t be any clashes between them and the antifascists.”

Golden Dawn as a Criminal Organization

After being imprisoned with and meeting the leaders of the far-right U.S.-supported military junta (dictatorship) that ruled Greece from 1967-1974, Nikos Michaloliakos created the Golden Dawn newspaper, which evolved into a group that was officially recognized as a political party in 1993. GD rose to prominence during the height of austerity issues in 2012 and garnered nearly 7% of the nation’s vote in 2012 and 2015, the third most of all parties, winning up to 21 seats in the Greek Parliament.

Through their years in the political spotlight, their violent and racist activity on the streets was mostly ignored by the broader society. That is, until 2013 when Golden Dawn members planned an attack on a small group of antifascists in Piraeus and they fatally stabbed white, Greek rapper Pavlos “Killah P” Fyssas.

It was then that authorities began their investigations and massive amounts of indictments followed.

After a trial that lasted for more than five years, GD was labeled by the Greek justice system as a criminal organization in October 2020 and its leadership was imprisoned.

The prosecutions and their failure in the 2019 national elections halted their political organizing and led to a split, with many of its leading members establishing separate extreme right-wing organizations. Thus, the last few years, GD has fallen into obscurity and other radical right groups like Propatria or Ieros Lochos (Holy Corps) have been trying to take its place.

However, this was not an impediment to GD’s public call and organized participation in the rally in Florina. They came equipped with flags, banners and mottoes such as, “Anarchists and Bolsheviks this land does not belong to you,” and “Ax and fire to the red dogs,” while people from the march were seen on video giving Nazi salutes to the direction of the anti-fascist gathering.

The fascist gathering was also supported by other nationalist organizations with GD, which represented the most organized part of the demonstration. Many members came from different regions of Northern Greece, and specifically from Thessaloniki, where GD is aiming to build a new core of members, addressing mainly the city’s youth.

During the 2012-2018 period when GD was most popular in Greek society, the majority of its activities and members were concentrated in the neighborhoods of Athens. It was in these areas where they held their events and gatherings as well as their racist pogroms and violent attacks. It was in Athens where they also murdered rapper Pavlos Fyssas on Sept. 18, 2013.

Mirroring its weak electoral power, GD had never managed to have a strong presence in the neighborhoods of the city. In contrast to Athens where entire regions such as Agios Panteleimonas and Perama had become hotbeds for the organization’s murderous attacks, in Thessaloniki its presence in the streets was always marginal. The multicultural past of the city and the anti-fascist reflexes shown by its inhabitants, when necessary, confined GD to very limited public appearances in Thessaloniki.

One of the exceptions to the above rule was the Macedonia rallies that took place in the years of 2018-2019 in response to the signing of the Prespa Agreement [pdf] and the issue of the name of North Macedonia. Greek nationalists consider Macedonia to be exclusively a Greek area, connected with the historic Greek kingdom of Ancient Macedonia and Alexander the Great. Thus, the name change of the neighboring country to North Macedonia, which was officially designated through the Prespa Agreement, is considered amongst Greek nationalists a selling of cultural and historical heritage.

At one of these rallies, on Jan. 21, 2018, groups of fascists, believed to have included members of GD, burned down the “Libertatia” squat and attacked the Free Social Space “School.” On the same day, a group of GD members vandalized the Holocaust memorial in the center of Thessaloniki, writing the name of the criminal organization and using the Celtic Cross, a symbol often used by fascists. At the same rally, GD had a fairly massive and organized bloc. It was one of the rare dynamic appearances of a fascist movement on the streets of Thessaloniki.

On May 7, 2021, the “Nationalist Center Sarissa” was re-inaugurated in the center of Thessaloniki, in the area where the GD offices were housed. YouTube videos show the symbols and the name of the criminal organization inside the Nationalist Center. Focusing on this area, the fascist group has attempted to build a core in the city, mainly around its youth organization called “Youth Front.”

People who frequent “Sarissa” have been behind a number of racist attacks and vandalism across the city. They’ve been labeled as the main organizers of the fascist group that was created in the 2nd Vocational High School (called EPAL in Greece) of Stavroupoli, a suburb in Western Thessaloniki, and at the center of clashes that broke out between nationalists and anti-fascist students in Sept. 2021. Although no responsibility has been officially claimed yet, reports mentioned the existence of a group of approximately 15 young people who were protagonists in attacks against refugees, immigrants and people with different political beliefs in the areas of Evosmos and Stavroupolis, Thessaloniki. The “Youth Front” of GD announced its support of the chaotic and violent actions of the radical right students.

A few days later, on Oct. 4, 2021, a group of fascists, possibly including GD members, attacked members of the Communist Youth of Greece and other left-wingers who were distributing leaflets in Ilioupoli, a suburb of Thessaloniki. One of the people present during the attack stated “They [the fascists] could have killed us.” A few days later, on Oct. 8, GD attempted to hold a rally for the one-year anniversary of its conviction as a criminal organization, but the event was banned by the Thessaloniki Police Department.

Almost one year later, on Oct. 7, 2022, a branch of Golden Dawn organized a demonstration, which started from “Sarissa” and gathered outside Thessaloniki‘s Courthouse. The executives of the organization spoke to the members gathered there. One of them stated, “We are not the same as we were in the parliamentary years…the reason is that our movement is framed with young people who are no longer discouraged by the supposedly pro-popular politics and sentiments of the left wing.” During the rally, members of the organization held flags with the Celtic Cross and other fascist symbols.

More recently, on Dec. 29, the monument of Thessaloniki’s Jewish cemetery inside the Aristotle University was vandalized with fascist symbols. A day earlier, a Greek radical right Telegram channel titled Hellas Defenders with images featuring the Celtic Cross and the Totenkopf neo-Nazi symbol, published a propaganda video of the action of GD members in Thessaloniki, in which they are seen painting swastikas and other Nazi symbols along with Golden Dawn mottoes.

The latest interference effort on the part of GD in Thessaloniki took place in the first days of 2023 during a Thessaloniki Pride event entitled “Drag Xmas,” which promoted the fight against gender discrimination by reading fairy tales to children aged 3-12 by a Drag Queen. In the lead-up to the event, GD issued a public statement condemning the event which forced the organizers to change the venue to a hidden location in the city. The event then took place without disruption. A few days later however, when GD found out the location where the event happened, they gathered outside the store and members wearing all black and balaclavas shouted anti-LGBTQ slogans, threatening the owners and the customers. This action was also propagandized by international far right channels on Telegram

All evidence suggests that GD is trying to reorganize with Thessaloniki as its hotspot this time. Nevertheless, this effort remains marginal so far. But the attempt to form a fascist, activist movement in the city streets makes one thing clear: The electoral failure and the split of Golden Dawn does not mean that the extreme right in Greece has been defeated. On the contrary, it is being secretly reorganized and waiting for the proper opportunity to reclaim its position as a potentially mass movement in Greek society.

Editor’s Note – Neo-Nazis in the U.S. Connected to Golden Dawn

White supremacists in the United States have long-held connections with top Golden Dawn leaders. Leaked chats from 2018 showcase a direct connection with Matthew Heimbach, the former leader of the now-defunct neo-Nazi gang Traditional Worker’s Party, sharing pictures and bragging about meeting with Golden Dawn leaders. Heimbach said in a Discord chat, “I love Greeks, Golden Dawn and actually going there is why i got inspired to create TWP.”

Former Marine Lance Cpl. Vasillios G. Pistolis, who bragged about ‘cracking three skulls’ at Charlottesville, was booted from service for his participation with white supremacist hate groups in the United States. Pistolis, who admitted to being a member of TWP and an affiliate of Atomwaffen Division said he gave up his Greek citizenship to work in the U.S. Pistolis was convicted of disobeying orders and making false statements and given a 28 day sentence before he was kicked out of the Marines. Pistolis was deposed in the Sines v. Kessler civil lawsuit for his involvement in the deadly 2017 Unite The Right events in Charlottesville, Virginia. In Discord chats in 2017, Pistolis and Heimbach chatted about their favorite Golden Dawn shirts and joked about TWP being a “Golden Dawn sleeper cell.”

Niko Georgiades contributed to this report for Unicorn Riot. Cover image edited by Niko Georgiades, images of GD action in Florina on Dec. 18, 2022 via VetoNews.

For more on Unicorn Riot’s far-right investigations and to access our massive database of white supremacist chats, click on the image below. 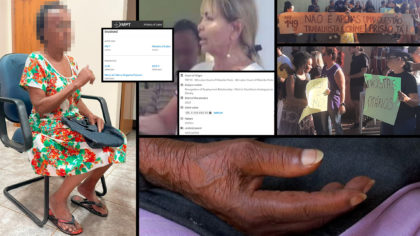