Ribeirão Preto, São Paulo, Brazil – One hundred thirty-four years after slavery officially ended in Brazil, a mixture of feelings ranging from revolt, insecurity, pain, hatred and disgust rose among the residents of Ribeirão-Preto when they learned of an 82-year-old woman being rescued after 27 years in servitude.

News of the elder being freed came on Dec. 7, 2022 by the Public Ministry of Labor (MPT). Details emerged that the woman was kept in service analogous to slavery for nearly three decades in a house located in the Ribeirania neighborhood in the eastern region of Ribeirão Preto. The city has a population of 711,825, and is located 195 miles from the capital in the northeast region of the State of São Paulo, the richest state in Brazil.

The recently freed elderly woman, who has not been publicly named out of respect for her privacy, is a Black woman known to be humble and illiterate. She was “given” by her “former owners” to upper-middle class couple Maria de Fátima Nogueira Paixão and Hamilton José Bernardo to continue providing slave services. De Fátima Nogueira Paixão is a pediatrician and retired Public Servant in the City Hall of Ribeirão Preto and Bernardo is a businessman who owns a clothing store.

The identities of the upper-middle class white couple accused of owning a slave were shielded by the media and police, in contrast to coverage around Black and impoverished people accused of crimes who are regularly named in reports.

The MPT has filed a lawsuit against the accused for the crimes of deprivation of social life, a salary, and the continuity of precarious conditions. The suit is asking for 800,000 reais (about $147,288 in the current exchange rate) of compensation for the victim, and the couple’s assets of just over 800,000 reais in were blocked by the court on Dec. 1. The Federal Police are investigating the case.

According to the Transparency Portal of the City of Ribeirão Preto, Maria de Fátima Nogueira Paixão worked as a pediatrician in the Basic Health Unit in Simione, a peripheral neighborhood of the city, and according to the Commercial Board of the State of São Paulo, her husband owns a company that has a share capital of 100,000 reais.

Despite all the atrocities initially exposed, other points drew a lot of attention in this macabre story. In addition to exploiting the victim’s work with little-to-no pay, the couple withheld the victim’s personal and legal documents and made use of her social benefits. They collected the woman’s Benefit of Continued Benefit (BCP) that she received monthly under the promise of using the money to buy her a house. She was also subjected to threats of physical punishment if she did not accept the conditions imposed by the doctor and the businessman.

Currently, the victim lives with her brother in Jardinópolis, a city near Ribeirão Preto, where she receives follow-up support from the Municipal Secretariat of Social Assistance.

Protest in Front of the House of Enslavers

Dissatisfied with the news, the Negro Movement of Ribeirão Preto, made up of sympathizers, students, teachers, civil servants, social collectives and political parties, gathered on Dec. 10 in front of the University of Ribeirão Preto (UNAERP) to express their individual and collective anger about the case. The demonstrators chanted and marched to the accused criminals’ residence, which is located near the University.

While in front of the residence, protesters chanted, held up posters calling the accused couple “racist” and performed poetry pieces denouncing anti-Black racism. Nearby residents and drivers sympathized with the cause, signaling their support by honking their horns and chanting along.

At one point, two vehicles passed near the protest in what many deemed as an intimidation tactic. After one of the vehicles went on the road and the other stopped, a Black policeman came out of an unmarked vehicle and demanded the protest stop. Protesters in turn shouted that the officer was reinforcing the idea that slavery is not yet over in Brazil and that there are still, what they called, “‘captains of the bush’ in defense of the white family and the big house.”

The protest ended with the demonstrators stating that the fight continues and that they demand that the accused enslavers are penalized criminally, without lenient penalty.

While significant, this case did not receive much local attention, and it isn’t the only case of its kind. Just in 2021 alone, 1,937 workers were rescued from services analogous to slavery in Brazil with similar numbers in 2022. It’s clear that slavery has not yet ended in the country and that cases like this one are still hidden among the high walls of the mansions and between agribusiness crops. 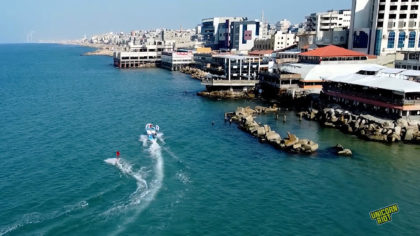