UPDATE: On Saturday, March 17, 2018, during the Aurora City Council’s Winter Workshop, the council decided to move a proposal of a 10-month moratorium on mobile home park redevelopment to an official vote during their city council meeting on March 26, 2018.

Aurora, CO – The second hearing in the lawsuit against the owners of Denver Meadows Mobile Home Park was set to be on March 6, 2018, however, it was postponed because the owners decided they want to settle out of court.

During the first hearing on February 23, 2018, five Denver Meadows’ homeowners took to the stand describing verbal abuse and harassment from management, as well as the messy demolitions of homes that they say had asbestos.

The lawsuit alleges that since spring 2016, the time the park’s residents created a homeowners’ association called Denver Meadows Vecinos Unidos Homeowners’ Association, the park’s owners have been continuously retaliating. Another section of the lawsuit alleges that Denver Meadows demolished mobile homes without proper permits or proof of asbestos testing.

According to 9to5 Colorado, a local organization which has been helping residents with the lawsuit, the owners’ desire to settle out of court stems from their realization that residents have a strong case against them.

Andrea Chiriboga-Flor, Transit and Housing Organizer with 9to5 Colorado, told Unicorn Riot that this postponement is positive for the residents:

It means we have a strong case and we want first and foremost for the retaliation to stop, and that residents are immediately reimbursed the thousands of dollars they paid through these charges not stated in the lease, and we think the settlement can accomplish that, though we know this would not prevent the park from closing. Which is why we are also working on a policy strategy to preserve mobile home parks all over Aurora.”

The policy strategy Chiriboga-Flor is speaking of would place a three-year moratorium on the redevelopment of mobile home parks and would create purchase opportunities for mobile home park residents in Aurora, CO.

According to the summary of the proposal for the policy strategy, which will be presented to the Aurora City Council on March 26, 2018:

A moratorium is necessary to reinforce Colorado state law protecting mobile home residents. The Colorado Mobile Home Park Act requires that notice of park closure due to change in use be provided six months in advance of the date that a change in use will occur. CRS 38-12-217. Colorado law also requires that rental agreements remain in full effect despite change in ownership…

Park residents, like those in Denver Meadows, report receiving conflicting notice and information about whether owners truly plan to close the park and the terms of sale… It is deceptive to tell residents that the park will close in June of 2018 when the park has not in fact been rezoned and the park owner is intending to sell it.”

Two years ago, in late April 2016, residents of Denver Meadows noticed a yellow sign posted on a fence in the park grounds that read “rezoning hearing May 11, 2016.” Without any direct communication from the park’s owners, the residents realized their home was in jeopardy.

In September 2016, residents reached out to 9to5 Colorado for guidance, and they both organized actions during a nation-wide Renter Week Of Action, which Unicorn Riot covered. During one action, residents and supporters went to the Tschetter Hamrick and Sulzer law office, which advertises itself as Colorado’s number one landlord law firm, as well as number one in Colorado evictions, and taped faux eviction notices on the walls and in the elevators.

During another action, residents and supporters handed Denver Meadows’ co-owner Fay Cline a letter expressing their concerns and their desire to purchase the land.

In October 2017, 9to5 contacted Resident Owned Communities (ROC) to help the nearly 100 Denver Meadows residents purchase the property from Faye Cline and Shawn Lustigman. The owners indicated to residents that they would consider purchase offers, however when ROC made a $20.5 million offer to finance the 20.4 acre park to turn it into a resident-owned cooperative, Cline and Lustigman immediately rejected the offer.

The purchase opportunity aspect of the policy strategy is based on a model law published by the AARP Model Law in Manufactured Housing Communities and endorsed by the National Consumer Law Center:

A purchase opportunity for mobile home residents would:

Although these policy strategies may not help Denver Meadows residents, they will help residents in future situations, if they are passed.

Chiriboga-Flor told Unicorn Riot what the next steps in the lawsuit are against Denver Meadows:

The part of the settlement that was just filed is around asbestos testing, it basically says that the owners have to provide proof to residents that they have permission to demolish a unit because it was already inspected. The next two parts, retaliation and reimbursement for charges that don’t comply with the mobile home park act is still being worked on, it is taking longer because it’s hard to quantify the impacts of retaliation.”

Before the first hearing on February 23, 9to5 Colorado and residents of Denver Meadows hosted a press conference, which Unicorn Riot covered:

Unicorn Riot will continue to provide coverage of the Denver Meadows Lawsuit. 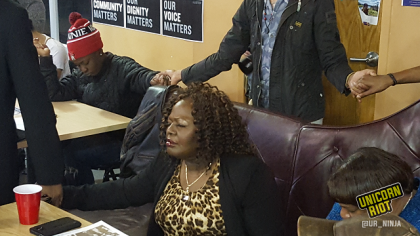 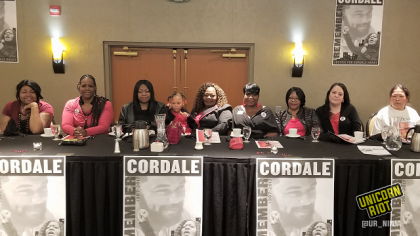