Time and time again millions of Brazilians go back to the streets to protest against misgovernance. Rocked by the shouts of “Fora Bolsonaro” (Bolsonaro out) and opposing shouts of “Olê, olá, Lula, Lula,” around 500 Brazilian cities, including all the capitals and another 17 countries around the world, registered anti-Bolsonaro manifestations (protests) on Saturday, July 24. However, a change in the mood surrounding the movement questions if these protests are enough.

For the fourth time in recent months, the Brazilian people went to the streets to protest Brazilian President Jair Bolsonaro’s handling of the coronavirus pandemic, among other issues. A strong base of participation included political parties from the left, right, center, trade union central organizations and social movements. (The previous major protests were on May 29, June 18 and July 3.)

The Avenida Paulista in São Paulo was closed by the protesters, but with considerably less adhesion by the people than in the past.

Outside the country, cities like Vienna, Austria, Berlin in Germany and Tokyo in Japan (host city of the Olympic Games) joined in on the demands of Bolsonaro’s impeachment, vaccines for everyone, job creation, end of corruption and Emergency Aid in the amount of BRL $600 requests.

Brazil: Hoping for a Vaccine, Food on the Plate and #ForaBolsonaro – July 9, 2021

According to a survey released June 8 by the Datafolha Institute, the disapproval of Bolsonaro’s government jumped from 45% to 51%, the highest since the beginning of his mandate in 2019.

If the continued calls for Bolsonaro’s impeachment are answered, many think without also impeaching President Hamilton Mourão, the well-connected Reserve General of the Brazilian Army, the country could go through another military coup.

Throughout numerous demonstrations, a COVID-centered Parliamentary Inquiry Committee, and political scandals, lots of Brazilian people Unicorn Riot has spoken with share the same thought: Just going to the streets protesting only maintains the status quo.

Many left-wing, center and even right-wing political parties have joined in the anti-Bolsonaro movement, hoping to utilize that popular anger for their own political interests. Protesters have stated they feel that they’ve been exploited by these parties, and are being used for something in which the social demands and the urgent needs of the people are not on par with each other.

The division of the country is nothing new to this population; in the 2018 elections they saw what this division can generate. The ones who have the money control the mechanisms that rule almost every aspect of the country.

According to people in the streets of many Brazilian cities, a lot of the ‘Fora Bolsonaro’ movement is being seen as an elite “social movement” pretending to fight against a sexist, racist and “genocidal” government, but hides their cell phones or purses when they see the “favela” arriving.

Leaving many in the favelas asking: Why would those who claim to fight for the people be so afraid of them? How can a protest in favor of the Brazilian people take place in large cities, on a Saturday afternoon, and “the people” are not actually present? How can a protest on behalf of the people not have space to talk about the real problems that prevail in daily life?

While covering the July 24 protest, some favela residents watching from the sides on their way home were heard saying that if they (the protestors) really want to make an impact, shutting down the highways or main roads for a week would affect the big businessmen and Bolsonarists’ profits and then, yes, the population would be heard and the people would come down from the favela to participate.

In São Paulo, separately from the main Bolsonaro demo on July 24, were two distinct direct actions. A large statue honoring a Portugese explorer and slave trader was burned in the daytime and banks were vandalized at night. The Borba Gato statue burning spotlights how widespread the ideas of decolonization and anti-racism are becoming after recent statue topplings in popular uprisings in North America. Police have arrested multiple activists alleged to be involved in the statue burning.

Article translation from Portuguese to English by Jules Rey. 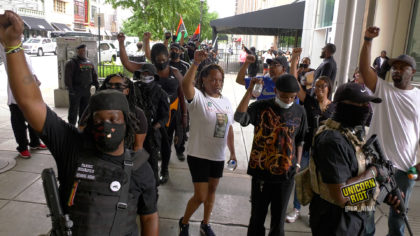 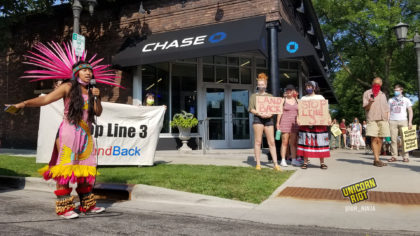