COVID-19 continues to ravage Brazil, leading to record numbers of daily deaths. For a deeper understanding of some of the impacts the coronavirus pandemic is having on several areas and aspects of life, Unicorn Riot recently heard from four Brazilians across different states.

With skyrocketing death tolls and a total of over 340,000 coronavirus fatalities, the mismanagement of COVID-19 has taken its toll on the population of Brazil. From misinformation to denying the virus and denigrating those who’ve died during the pandemic, Brazil’s far-right President Jair Bolsonaro has been blamed for the shortage in vaccines and the widening public health calamity.

In small towns like Piúma, Espirito Santo, the health system is completely insufficient. Catarina Mais, a local health professional, spoke to Unicorn Riot about the ICU crisis in the state of Espírito Santo. Mais said the UK variant, the most aggressive COVID-19 variant, had just entered the town, likely from “a tourist from another state or county.” This could be devastating for Piúma, as the population doesn’t have enough hospital beds available. Mais said they can’t even count on an ambulance to transfer high-risk patients to better equipped hospitals.

She called out for help:

An obvious reality of the pandemic is that the effects vary drastically from city-to-city, state-to-state, and country-to-country. In Brazil, the effects are accentuated by the stark contrast in social conditions. A large portion of the underprivileged population lives in close proximity to the wealthy, but has a completely different reality.

While violence can still be a problem for the financially stable, the people in the favelas and other peripheral areas of the cities endure drug faction wars and police violence.

In the state of São Paulo alone, a staggering total of 5,153 were killed by police from 2015 to 2020, with nearly a quarter of them being children and teenagers.

Similar statistics of police terror are recorded in Rio de Janeiro. From March 2020 until March 2021, there were 377 counted police actions in Rio, over one-a-day. This happened after August’s ruling by Brazil’s Supreme Federal Court (STF) suspending all police operations during the pandemic. The police never ceased their operations and Rio resident, Thainã de Meideiros, says the police keep “coming up with excuses” to violate the legislative order.

Meideiros lives in Complexo do Alemão, a large group of favelas in Rio de Janeiro where a recent military and police occupation of the favelas lasted a few years. Police violence is a constant in Complexo do Alemão. Just three months before STF ordered the suspension of police operations, 13 people were killed by police in one operation.

Meideiros is part of the Papo Reto Collective, which is a group focused on human rights, culture, harm reduction, health, education and communication in Complexo do Alemão. Meideiros told Unicorn Riot that not only have police raids not stopped, the favelas are now facing a serious water shortage.

“The police found ways to keep making these raids, always coming up with excuses, saying a patrol car was passing by and was shot at and they fired back. […] as if it wasn’t enough this pandemic situation where a lot of people are dying from it we also have water shortage and shootings inside the favelas. This week only in the Complexo do Alemão we had two shootings.”

While violence is a recurring issue for the most vulnerable populations of Brazilian society, the ineffective and contradicting COVID-19 countermeasures have been impacting the people.

Targeted by police and abandoned by the health system, the underprivileged continue to be economically neglected by the government. Financial aid was cut off and the lockdown measures and policies enacted to fight the pandemic, such as the work-from-home initiatives, made life virtually unsustainable.

For those living stacked up in the little edges and corners of countless Brazilian cities, isolation and quarantine is a privilege people usually can’t afford. This leads to workers risking their lives to make a paycheck.

From Porto Seguro, Bahia, rapper Celião told Unicorn Riot there’s no “effective sustenance for families and the population is searching for solutions.“

“We’re in a total state of vulnerability because those who dare to try to make a living are fought with repression policies.”

Distancing policies and curfews with no financial aid completely ignore the needs of the majority of the working class to get money to eat and pay for shelter.

In turn, mutual aid initiatives have become a backbone of support for the Brazilian people. Movements like “Serrão without Corona” which helped millions of families in the Aglomerado da Serra community of Belo Horizonte, Minas Gerais are the only support most people can count on.

“The favela’s helping the favela, because if it’s not us for us, nobody else will.“

“There’s a lot of hunger,” DJ Pity told Unicorn Riot. “We’re trying to bring awareness about staying home, but if people stay in, how can anyone eat? How can anyone live? So, I’m here to say that, man, like, the situation here in BH [Belo Horizonte] is awful.“

DJ Pity said they hoped that “everyone is vaccinated” by next year. Yet, the reality of mass vaccination is still far away. While the favelas and rural communities might have completely different cultures and experiences, they share the same governmental neglect and extremely risky living environments.

Below are the full translations of each of the four short testimonies.

Hey, Everyone! It’s me, DJ Pity, directly from Serrão, Minas Gerais – Belo Horizonte. Flávio [EmiciThug] invited me to talk a little about the Coronavirus situation in my community. Guys, the situation we’re living here is not a good situation, we’re on the purple wave, everything is closed, it’s lockdown, it’s curfew. But what’s the use if the governors don’t take action? They don’t look over the favelas, everything happening in here is made from and for the population. We’re doing food distribution, we’re helping our people in need. I was part of the first weeks of the “Serrão without Corona” project, where we helped millions of families here in the community because there’s a lot of people in need. There’s a lot of hunger, you know? We’re trying to bring awareness about staying home, but if people stay in, how can anyone eat? How can anyone live? So, I’m here to say that, man, like, the situation here in BH (Belo Horizonte) is awful. We’re waiting to get better, we’re awaiting the vaccine, but our government won’t do anything for us, we’re doing for ourselves. The favela’s helping the favela, because if it’s not us for us, nobody else will. So, guys, that’s what’s going on here, let’s bring awareness about what we’re trying to do here, I’m a cultural producer, I’m a part of the biggest Baile Funk in the Aglomerado da Serra community and right now it’s really hard for everyone and I hope that next year, or in the middle of this year, everyone is vaccinated. Thanks, everyone, peace!

My name is Catarina Mais, I’m a licensed practical nurse and social and political activist. I live in the city of Piúma, in the state of Espírito Santo, Brazil. How’s the pandemic in Piúma? Today we have a very high coronavirus contagion rate and in this last week I received the sad news about the presence of the UK variant, the most severe and aggressive COVID-19 variant. Piúma is a touristic city and I believe that this variant got here with a tourist from another state or nearby county and since the city barriers were not closed, the contamination increased. Today, the city is in lockdown, everything is closed and we have a very high contamination risk. We don’t have mobile ICU, we don’t have a cutting edge hospital with an ICU, we don’t have ambulances to transfer high risk patients and now our state is in collapse because we’re lacking ICU beds. So Piúma is asking for help, the state of Espírito Santo is asking for help. Brazil is asking for help.

Thainã de Meideiros here, my collective is “Papo Reto” in the Complexo do Alemão (Rio de Janeiro) and during the pandemic the STF (Supremo Tribunal Federal, the Brazilian equivalent of the Supreme Court) ruled a decision making police operations on favelas forbidden, and in the first moment we had a huge drop in numbers of death, but that was soon disrespected. The police found ways to keep making these raids, always coming up with excuses, saying a patrol car was passing by, was shot and fired back. Those numbers started to grow again, so as if it wasn’t enough this pandemic situation where a lot of people are dying from it we also have water shortage and shootings inside the favelas. This week only in the Complexo do Alemão we had two shootings.

I’m Célio Assis, known as Celião, rapper and composer, born in Porto Seguro, Bahia. The COVID-19 situation in the peripheries keeps getting more precarious, we’re the most vulnerable population, both in getting contaminated and having complications that can lead to death as well as suffering the economic consequences caused by the virus. So, we’re in a total state of vulnerability because those who dare to try to make a living are fought with repression policies. We don’t have an aid that can really maintain an effective sustenance for families and the population is searching for solutions. We’re not getting a mass vaccination and what’s left for us is just waiting for the moment [of vaccination] and surviving anyway we can. 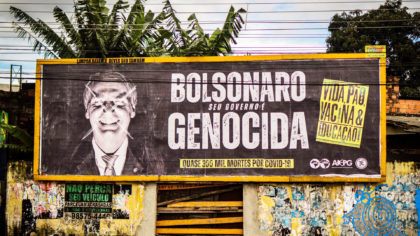 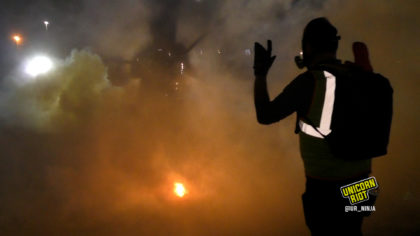