Update – Denver, CO – On Friday, September 9th, 2016, Attorney Jason Flores-Williams filed the motion for class certification for the class-action lawsuit against the city of Denver for violating constitutional rights during “the sweeps” of people without housing.

Terese Howard, member of Denver Homeless Out Loud, clarifies what this next step in the class-action is:

The motion for class certification that was just filed is the document that has to be submitted before the hearing on class certification. The hearing is when the judge will decide if our proposed class meets the requirements for a class, which is under rule 23. The motion along with the declarations and a bunch of evidence and testimonies will prove to the court and judge that we do in fact represent the class. The class is all people who have been homeless in Denver anytime since the camping ban passage on May, 14th 2012, and have either had belongings taken by cops or have the risk of that happening in the future. What we have to prove, in summary, is numerosity—that the class-action represents a large number of people, commonality—that there is a common way that this is happening across the board such as the practice of sweeping, typicality—that the plaintiffs have to be typical of what’s happening to the people in the class; the 9 plaintiffs have to be representative of what’s happening to the class.”

Included in the evidence submitted by Flores-Williams is an expert affidavit by Associate Professor and Chair of the Political Science Department of the University of Colorado Denver, Dr. Anthony Robinson.

Part of the affidavit reads:

Defendants’ systematic policy and practice of confiscating property from this class of citizens has profoundly deleterious effects on homeless persons’ legal standing, emotional well-being and medical health, while providing no demonstrable benefits to the City and County of Denver.”

The evidence also includes correspondence e-mails between city of Denver officials confirming their planning, practice, and implementation of the sweeps and confiscation of property.

From Exhibit D of the e-mails, one of the defendants, Evan Dreyer, sent “a few big obvious questions/answers” to city officials about their communication strategy:

Are you just going to throw away people’s belongings? Absolutely not. We will encourage people to take their belongings with them. If they don’t, items will be taken to 1221 Glenarm Place. Items will be available for retrieval at that location Monday through Friday from 12 noon to 2 p.m.”

View the other exhibits here: Exhibit A, Exhibit B, and Exhibit C.

Here is the press release from Denver Homeless Out Loud.

Denver, CO – On Thursday, August 25th, 2016, civil rights attorney Jason Flores-Williams filed a class-action lawsuit against the city of Denver on behalf of the thousands of residents without housing whose rights have been repeatedly violated.

With help from local advocacy group Denver Homeless Out Loud, Flores-Williams was able to gather over 60 people willing to be plaintiffs in the class-action. Out of the willing people, 9 were chosen to participate in the lawsuit to represent themselves and the others who have had similar experiences of harassment and abuse at the commands of the defendants Mayor Michael Hancock, Police Chief Robert White, Denver Public Works Manager Jose Cornejo, Hancock Chief of Staff Evan Dreyer and District Six Police Commander Antonio Lopez. (Commander Lopez is already facing a separate federal civil rights lawsuit).

Raymond Lyall and Jerry Roderick Burton are members of Denver Homeless Out Loud and have spoken out many times about the mistreatment they have faced. They have both been “swept” consistently by law enforcement and other city workers, which means they have been approached when sleeping or resting on public property and told to “move along” or they would be ticketed.

It means that there’s just nowhere that you can go anymore. You go to one block, and [the police] follow you over there. Then you go three blocks down, and they follow you down there. So it’s like they’re telling us that we have to walk around and around and there’s nowhere we can stop.” – Jerry Roderick Burton

Ray Lyall narrates the short film below which was made as a tribute to Denver Homeless Out Loud by the Urban Citizen class at the University of Colorado.

Due to the ever-increasing “affordable” housing developments being built downtown for people who make at least $35/hour, which is almost four and a half times Colorado’s minimum wage, the number of residents unable to afford housing and are therefore forced to live on the streets is also ever-increasing.

In his State of the City address on July 11th, 2016, Mayor Michael Hancock touted the plan his administration would be presenting to City Council:

To create Denver’s first permanent, dedicated fund for affordable housing. With at least $150 million to be leveraged in the first ten years, we expect to deliver 6,000 more affordable homes.” – Mayor Michael Hancock

Hancock continued what many call his hypocrisy by pretending he and his administration have no hand in the rampant involuntary displacement and gentrification occurring in Denver:

We are laser focused on neighborhood preservation and keeping residents from being displaced by growth and development. We can have development without displacement, it does not have to be either-or. We have taken a deep dive into the challenges stemming from gentrification in recent months. We know where, and how, it is occurring, and we are working hard to address it.” – Mayor Michael Hancock

Thomas Peterson, another plaintiff, had all of his property taken without due process of law when “sweeps” increased downtown amidst baseball and tourist season on March 8th, 2016. People were told to “move along” and the property they could not haul off fast enough or all at once was seized and brought to a holding facility where their property would be stored for 30 days and then destroyed.

Peterson went to the facility on March 25th, 2016 to retrieve his property, but was not allowed to enter the facility and had to describe in great detail every item which was taken. After 30 minutes of re-describing his belongings and of the worker looking for them, his belongings were not found.

When they were taken, Peterson was at breakfast and was completely unaware and was not notified that the city was planning on sweeping the area and confiscating property.

They took his life. They took his clothes, pictures of his kids, government papers, an address book, tarps, blankets, and sleeping bags.

When he returned from breakfast and realized all of his belongings had disappeared, he had to ask around to figure out that it was the city who had taken his property and learned of where he could go to get it back.

Part of the lawsuit, which can be read in full here, states:

Terese Howard, of Denver Homeless Out Loud, spoke with us on August 18th, 2016 after the first meeting to gather potential plaintiffs.

It’s time to respect people on the streets the same way you would respect anybody living in a house or anybody with lots of money. I think the city is going to push back in whatever ways they possibly can, but there is a good precedent growing around the country for these types of cases winning. There was a recent case in Fresno, California where a lawsuit for sweeps in Fresno was brought forth and they won and actually got millions of dollars from the city, so I think the tides are turning potentially in a good way for lawsuits.” – Therese Howard

There was another precedent set in Fresno, California in 2014 when the 36 plaintiffs won against the city and received a large settlement. The lawsuit was filed after the city bulldozed people’s encampments in the downtown area in 2011.

Shannon Wolf, a Denver resident without housing who was hoping to be one of the plaintiffs, spoke with us inside the Gates Conference room at the main branch of the Denver Public Library where the first meeting for potential plaintiffs took place.

I had a tent up and all my belongings were inside, twice, I walked up to the porter john to go to the bathroom, came back 10 minutes later and my stuff was gone and the rangers or police, one time it was rangers, one time it was police, were driving away with my stuff in the back of their truck. No notice, no nothing telling me how to get it back. Nothing; just gone… If you tow somebody’s car, there has to be a sign up saying where it’s been towed, so if you tow or take my tent, which is my home, my current home, then I should be able to be told where it’s at and how to get it back.” – Shannon Wolf 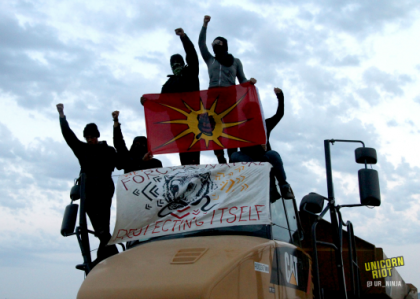