Superior, WI – Resistance against Enbridge’s Line 3 Pipeline expansion is ramping up. Near the Fon du Lac Reservation, at the frontline camp, Makwa, water protectors, land defenders, warriors, and others have participated in a wave of civil disobedience that has resulted in 16 arrests in multiple actions that have delayed construction work on the pipeline in the last month. On the morning of September 18, Unicorn Riot covered another direct action to stop construction on the Wisconsin side of the Minnesota-Wisconsin border.

To watch a livestream of the action which featured a person locked down to a flipped over car, see below:

These direct actions have targeted the construction of the Line 3 pipeline expansion in Wisconsin. Line 3 carries diluted bitumen slugged out of the Alberta, Canada tar sands through Minnesota and into Wisconsin’s Calumet Superior Refinery in Superior, Wisconsin.

Stay tuned with Unicorn Riot as we will have a larger special on the struggle against Line 3 and those fighting to defend and protect the Ojibwe way of life. 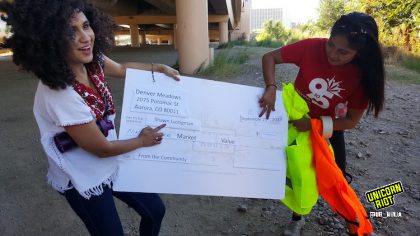