Duluth, MN – On Friday, July 13, the St. Louis County court accepted the use of a climate change necessity defense. The decision comes from a court case stemming from a January 12th, 2018, lockdown by 3 water protectors at a Wells Fargo Bank in Duluth. The defendants are arguing that they committed the lock downs intentionally to stop Enbridge’s Line 3 pipeline construction, and said their “actions were necessary and reasonable to avoid the greater harm of climate change.”

During their trial set for October 19th, 2018, the defense will be able to present expert witnesses to layout the connection of banks like Wells Fargo to oil companies like Enbridge, and explain how the banks funding of fossil fuel infrastructure increases risks from climate change. The argument was allowed after the judge agreed that climate change was a real risk, but wanted to further understand how banks like Wells Fargo funding companies like Enbridge increases the risk.

After the press conference, water protectors from the new Camp Healing Souls joined local activists, allies, and water protectors and marched again on the Wells Fargo bank where the lockdowns had occurred in January.

The march entered Wells Fargo and shut down the bank until local Duluth police arrived and threaten the water protectors with arrest for trespassing. The march left and went to a local Enbridge office, where they made clear their intentions to continue to resist construction of the company’s recently approved Line 3 oil pipeline. Police once again appeared and told those gathered to disperse or face arrest.

Dozens of water protectors are marching on @WellsFargo & @usbank in #Duluth, #Minnesota imploring the banks to #Divest from funding #FossilFuel projects after a judge ruled in favor of a #ClimateChange necessity defense in a local case. #StopLine3#LIVE: https://t.co/OgE1ozvv9s pic.twitter.com/treFzsNElv

After the march began to disperse, police grabbed one of the marchers wearing a ‘Guy Fawkes’ mask, often associated with the Anonymous movement, and threatened them with arrests for operating a sound system with no noise permit. The police let the person go once they unmasked. 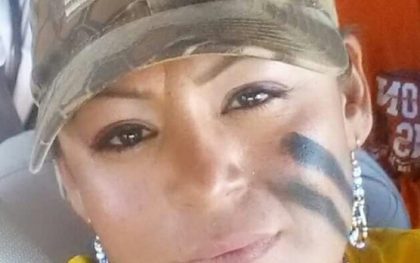 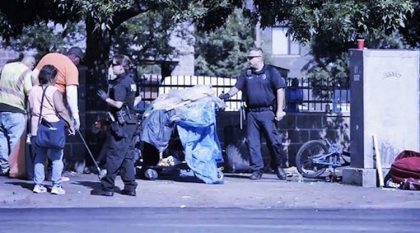