St. Paul, MN – Over 50 water protectors protesting Line 3 were arrested, some violently, outside the Minnesota Governor’s Residence in St. Paul on Saturday, August 28, 2021. Those arrested were among hundreds who marched from the Capitol to Governor Walz’ mansion attempting to speak to him about their opposition to the Line 3 pipeline construction in northern Minnesota that’s nearing completion.

The march on August 28 was led by pipeline resistance camp Camp Migizi, who had three Indigenous water protectors lock down to the fencing of the mansion after unsuccessfully pursuing a meeting with the governor. Behind water protectors who formed a human blockade, Taysha Martineau, a prominent figure in the movement against Line 3, was one of those who locked down and was arrested. In the video below, Martineau spoke to Unicorn Riot about why they locked down.

The march to the Governor’s Residence came after a week of pushing for elected officials to stop Line 3 with prayer and ceremony on the Capitol grounds and being met with a massive police presence and repression. At least 16 tipis were set up outside the Capitol beginning on August 23 for the week of ceremony and prayer.

Three days before the action at the mansion, the largest gathering of the week outside the Capitol building took place to greet water walkers who marched from the Mississippi Headwaters to St. Paul calling on the government to stop pipeline construction.

By Thursday, all the tipis were taken down except one in which a sacred fire was lit and ceremony was held. That single tipi lasted until around noon on Friday, August 27, when State Troopers arrested six water protectors who were trying to protect it during ceremony. Authorities forced the tipi down and made the water protectors remove the sacred fire.

During the march from the Capitol to the mansion, the group stopped at the Cathedral in St. Paul to rally and hear speeches.

Upon reaching the mansion, water protectors rang the doorbell and were told Governor Walz was “unavailable.” A group of water protectors went to the gate in the alley behind the mansion and knocked on the fence. After St. Paul Police moved in and cleared the alley, many were arrested at the fence for sitting down and locking arms.

Meanwhile in the front of the mansion, the three Indigenous water protectors locked down with bike locks and were surrounded by supporters who formed a human blockade. The police then made their moves to suppress the peaceful, yet disobedient direct action.

Multiple agencies assisted the St. Paul Police including upwards of 100 State Patrol and Conservation Officers from the Department of Natural Resources.

The LRAD (Long Range Acoustic Device) was used to give dispersal orders to the water protectors who gathered in the upscale St. Paul neighborhood attempting to speak to the governor. The dozens of water protectors arrested were put onto school buses, and while waiting to be transported away from the mansion, one arrestee yelled a question out the window of a bus to the police: “Do you serve exclusively Enbridge?“ 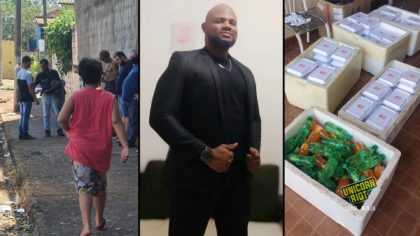 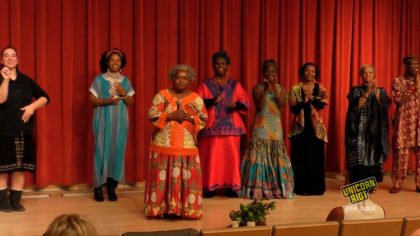