Minneapolis, MN – Activists hoisted a massive banner reading “No KKKops, No Pipelines” above Hiawatha Avenue on Sunday, October 4. More than 20 feet tall, it had been intricately strung from the suspension cables above the Minneapolis Greenway’s pedestrian transit bridge. Sight of the banner was first reported at 9:30 a.m., and it continued flying into the night.

#Minneapolis: protesters hung a banner from bridge over Hiawatha Ave.

We were told the banner was dropped to draw connections btwn #police & the #FossilFuel industry, “working in concert to perpetuate and maintain a ‘law and order’ that is nothing short of genocidal & ecocidal.” pic.twitter.com/6gB48dVJk5

Unicorn Riot obtained a statement from the activists who created and installed the banner, who chose to remain anonymous. They explained that both the composition of the banner, as well as the location itself, were carefully selected “to call attention to the connections between two colonial white supremacist forces.” They identify these two forces as the expanding fossil fuel industry and the police (“KKKops”).

Read below the protesters’ full statement on the banner drop:


Written in all-capital letters on the banner, the two words “No KKKops” are explained in the statement to reference the actions of Minneapolis police in the past year. The second paragraph describes the uprising after the callous and well-publicized police killing of George Floyd “within miles of this bridge,” then condemns the MPD’s role in the city’s violent raids on homeless sanctuary camps this summer. The first to be raided was the Hiawatha/Franklin encampment, claims the statement, “starting at the foot of this bridge.”

“No Pipelines,” the second line of the banner, refers to the expansion of the fossil fuel industry in an era where the devastating effects of climate destabilization are being experienced across the globe. Specifically in Minnesota, protests against Enbridge’s Line 3 tar sands pipeline replacement project have been ongoing for years. While the existing pipeline has been deemed of only limited benefit, the risks of its continued operations are considered serious — particularly of oil contamination of the state’s famed waterways.

More recently, support for the project has been revived by ‘astroturf’ groups such as Minnesotans For Line 3 (M4L3). In contrast to ‘grassroots’ movements built up gradually by and for everyday people, ‘astroturfing‘ involves the manufactured (false) appearance of widespread support for a policy or course of action.

M4L3 signs were on display last year when Unicorn Riot reported from an Indigenous Peoples Day march in Clearwater, MN. Water protectors and allies gathered to march to the Enbridge terminal there, calling attention to the threats tar sands pose to Minnesota’s water and wild rice — both sacred to the Anishinaabeg. Speakers also highlighted the direct link between the fossil fuel industry and missing and murdered Indigenous women and girls (MMIWG). During the water protectors’ march to protect the sacred, handfuls of non-Indigenous counter-protesters flashed M4L3 signs from the side of the road.

On August 3, 2020, several Anishinaabe women gathered at the Mississippi River headwaters in their homelands to collect a pint of water. Since then a “Relay for our Water” has seen the pint ceremonially passed between environmental and faith-based groups across Minnesota, stopping in Minneapolis at the end of September. Enbridge’s Line 3 pipeline is specifically identified as a threat to water on their Facebook event page.

The activists responsible for this Sunday’s banner drop specifically call out the police as a “colonialist white supremacist” institution. Their message was publicized just six weeks prior to the five-year anniversary of the Minneapolis police killing of Jamar Clark.

As we move into the autumn months of 2020, many emergencies are set to intersect at once locally: the housing and rent crisis; deeply embedded race-based inequality and police violence; the continued unpredictable effects of climate destabilization; and Minnesota COVID-19 cases now totaling over 100,000.

“Stop killing us!” implores the activists’ statement. Oil pipelines have a record of leaking, including the Dakota Access line in neighboring states. It is an understatement that the people who live in Minnesota do not need and cannot afford a new emergency, in the form of the contamination of the area’s precious ten thousand lakes. 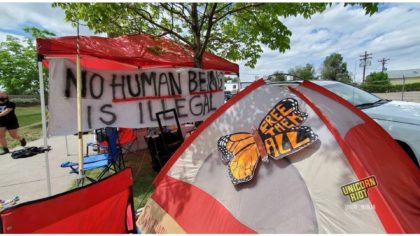