A water protector named Rose sat atop a 40-foot bipod on the west end of the road, and about five miles to the east, water protectors Big Wind and Danny locked down to a flipped-over car. Both blockades prevented workers from entering and exiting the work sites for over five hours.

Below are videos of the blockades, which highlight the live interviews we did with the Line 3 resisters.

Before locking down to the flipped-over car, two Indigenous water protectors, Big Wind (Northern Arapaho) and Danny Leclaire (Shoshone-Bannock), spoke to us about their decisions to put their bodies on the line. Big Wind spoke about the construction of Line 3 that’s “desecrating pristine wetlands” and “violating treaty obligations.” Big Wind burned their per-capita payment from the U.S. government, saying this is “an end of an era, death to the Black snake.“

Now, we know that Indigenous people who keep traditional ecological knowledge; that it’s imperative to the shared solutions of the current climate crisis. In fact, when you look at the world, by only making up less than 4% of the human population, Indigenous people are protecting 80% of the world’s biodiversity. And I don’t think that’s a coincidence.

Well, with that being said, I have to be real, just because of that, that doesn’t devoid ourselves from this fossil fuel addiction economy. And because of that, it allows multinational corporations like Enbridge to go and have backdoor deals with government sanctioned business councils, so that we get crumbs compared to what they are actually making. And for generations, that’s bought our silence.

No more, no more man camps, no more selling our voice. And it won’t be silence. And so, here I have a per-cap payment from the government, that, you know, this is because I get a check—this is that ‘we get a little piece of the pie,’ right? And they were stealing it from us before we were even getting any part of it. And at one point in time, we didn’t understand the ecological impacts that it had, or the health effects that it had in our environment.

So, we’re here today and as I burn this per-cap payment, it signifies the end of an era, death to the black snake, and the ushering of a new era where we all have access to clean drinking water, where we can rapidly transform our energy system to a just transition. And where we understand that the only way we’re going to survive this climate crisis is by living in tandem with the nature around us.”

Before locking down, Danny spoke about the importance of water and the affects a pipeline spill may have on the Mississippi River, lakes, streams, and living beings.

“I’m Danny Leclaire. I’m here to help stop Line 3, because if this goes through, it’s gonna affect the headwaters, the Mississippi along with all the water that the Mississippi touches, everything, all the lakes, all the streams, everything that it goes through. And then that, by extension, affects all the plants, the animals, the fish, the birds, the humans . . .

We also spoke with Rose as she was sitting on a wooden seat suspended nearly 40 feet off the ground.

“I think that you know, something I’ve been thinking about is being from here. And you know, a lot of my family lives in northern Minnesota. I grew up going fishing in the lakes and going camping, and it just feels like this really serious and deep cognitive dissonance, that folks have to both like benefit from the land and find it beautiful and find peace there, and also be willing to put this pipeline through that’s only for corporate greed and isn’t going to benefit anyone long term. Instead, it’s going to poison our water and continue to push us into climate disaster. So that’s why I’ve decided to take a risk, and also to stand with my Indigenous comrades who are at the frontlines of this fight, and have been since colonization began.”

Rose while atop a 40-foot bipod blockading Loon Road

Soon after Rose ascended the bipod, a worker whose way was blocked by it got out of his truck, walked up and began ripping off caution tape that was placed by supporters on the ground near the bipod. Protesters tried to block the worker, but he walked underneath the bipod toward the Aitkin County Sheriffs. The sheriffs told him to get back in his truck and find another route. As the worker turned around and walked back underneath the bipod, he pulled on one of the ropes stabilizing Rose.

Because the ropes were highly secured, she was physically unharmed, but she told us it was a scary experience. A Facebook livestream by the Giniw Collective captured that alarming moment:

All three water protectors involved in the blockades were eventually extracted and arrested by sheriff’s deputies.

Unicorn Riot was live from the car lockdown and also streamed from the extraction of the bipod. 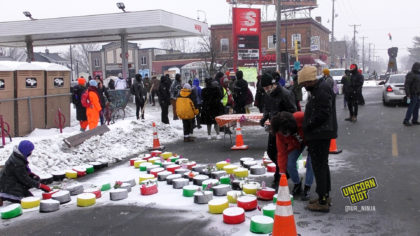 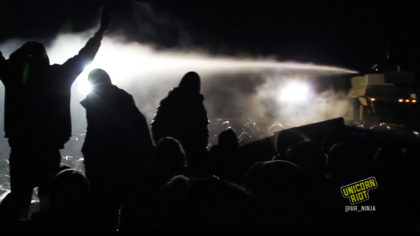