Hubbard County, MN – On August 4, 2021, in the first trial prosecuting water protectors since active construction of the Line 3 pipeline in the state, one defendant was acquitted, and the other was found guilty by a jury on two misdemeanors—public nuisance and unlawful assembly.

“We shouldn’t be surprised that the state has given me this egregious sentence; they aim to scare us. Don’t be intimidated by the state—take a step back, get grounded and think about those who won’t hesitate to keep taking action.”

Water protector and political prisoner Brock Hefel was one of twenty-nine arrested while rallying in a grass ditch off the side of a road on June 15, 2021. Meanwhile in the road, there were two water protectors locked down to a truck carrying massive drill bits for a horizontal drill intended to bore water crossing pathways for Line 3.

Unicorn Riot spoke with Hefel through a cellphone provided by the jail, where he has been since Judge Eric Schieferdecker remanded Hefel to the Sheriff’s Office after being found guilty on August 4. Two days later at his sentencing hearing, which he was forced to appear in jail garb and shackles, the Judge gave him the maximum 30-day sentence for a misdemeanor (the prosecution only asked for 15 days).

One of Hefel’s attorneys, Bruce Nestor, wrote in a press release that “most people do not even serve time in jail for a misdemeanor.”

Hefel said he feels like he was only being tried for his political views: “Watching [the Judge] come to the conclusion that I’m just a straight criminal from what I was doing is just astonishing. That activity, how can that warrant such a response? It’s quite sickening.”

The “activity” Hefel is referring to can be seen in our video below, where he and 28 other people were rallying in a grass ditch while chanting and holding signs. (You can watch our full stream of the event at the end of the article.)

(Our reporter on the ground was the only person not arrested. Deputy Sheriff Troy Christenson told them that they needed to stay at the bottom of the grass ditch, where everyone else had been, to avoid getting arrested.)

As Hefel sat in his cell, which he shares with another person (who he says he gets along with), he described his experiences inside, along with his perspectives on his sentencing and how it may affect the Line 3 resistance movement.

He told us that there is a tuberculosis outbreak in his cell block, and that his cellmate tested positive in the initial skin test, but that the test isn’t 100% accurate. The cellmate is getting bloodwork done to get a more accurate result. Hefel also shared that as far as Covid-19 and the Delta Variant go, he got tested when he was booked and didn’t get put in a cell with his cellmate until his test came back negative. In addition, everyone including the officers wear masks.

The jail is decently clean, and he and his cellmate clean their cell everyday. Hefel said the food is gross, but that he deals with it. There is a small exercise area that reminds him of a racquetball court with the high concrete walls. There’s not enough room for cardio, but he says he enjoys being in there because of the fresh air: “I don’t know if they have windows open or something, but it’s a lot fresher air in there.”

Because of time served and good behavior, Hefel is expected to get out of jail on August 21, 2021. He told us he feels hesitant to call himself a political prisoner because of his short sentence, alluding to people who spend much of their lives behind bars. Yet, because he feels that his arrest and sentencing were politically motivated, he concedes to the title:

“The court and the state are in-line with the police and they’re ready to oppress the movement. I feel with how sentencing went and how the whole court experience went, I feel the court has taken sides.”

Hefel told us that he and his lawyers got letters about his character from people he has close relationships with, yet the Judge refused to read any of them. He said he’s worried that the same Judge may preside over other water protector cases, especially Hefel’s 27 co-defendants from June 15.

“Even if I thought those two [statutes] were just and fair to even use—the whole structure of it is unethical—even with that, we were in a ditch. I was literally a police liaison trying to make sure we were being as unconfrontational as possible so that we didn’t get arrested, that’s what I was there for.”

No matter the non-violent nature of the charge and Hefel’s empty criminal record, Judge Schieferdecker decided to make an example out of him by citing “deterrence” as his main concern at sentencing.

Hefel doesn’t think the Judge’s aim of deterrence will work: “Just some judge in Hubbard County doesn’t compare to the urgency felt by youth and people in progressive communities. It’s nothing in comparison.”

During the June 15 demonstration, one of the women locked down told us how she thinks people need to put their bodies on the line, “otherwise it will not stop, and we will continue to burn fossil fuels until the earth burns up for everyone.”

About 20 minutes into the demonstration, sheriff’s deputies with Hubbard County crossed the road and told everyone rallying in the grass ditch that they were under arrest.

Hefel, who was in a police liaison position, asked Hubbard County Sheriff Cory Aukes why an arrest warning or dispersal order wasn’t given. He replied by saying: “We don’t need one!”

Unicorn Riot continued to stream the rest of the lockdown, even after the rallying water protectors were driven off to jail. The last locked-down individual was fully extracted and taken into custody after three hours.

Tara Houska, tribal attorney and founder of Giniw Collective, referred to Hubbard County’s actions toward the water protectors on June 15 as “assault on fundamental constitutional rights to assemble.”

“People holding signs in the ditch of a public road aren’t criminals, they’re engaging in one of this country’s oldest practices. Criminalization of protest and private influence on the law is in full swing in northern Minnesota with dangerous precedent being set.”

Since December 2020, over 700 water protectors have been arrested in northern Minnesota protesting the Line 3 pipeline, and most of the corresponding law enforcement costs are paid by the Enbridge corporation.

Hefel believes the partnership between Enbridge and MN law enforcement directly influenced the arrests of him and the 28 other water protectors on June 15.

One of Hefel’s attorneys, Joshua Preston, told us how he is “worried about how this verdict will jeopardize the ability of water protectors to exercise their right to free speech and public assembly. What water protectors did that day was not an example of people marching onto the Interstate and blocking traffic; instead, they gathered peacefully in a ditch to show support for their movement.”

“But given the mass arrest that occurred anyway, it’s worth asking: Where are water protectors allowed to demonstrate? Right now, in Hubbard County, regardless of whether you’re in the road, on the side of the road, or in an overgrown ditch trying your best to obey the law, you will be treated as a public nuisance and member of an unlawful assembly.”

Even if you’re on your own private property as a water protector in Hubbard County, there is a chance you will be met with police force. Beginning on June 28, 2021, the Sheriff’s Office barricaded the Namewag Camp, a privately-owned property of water protectors, stating that the sole entrance would not be “open to vehicular traffic per Hubbard County’s Land Use Ordinance.”

After a few days, the Hubbard County Sheriff pivoted to a tactic he had used before—stationing at least one squad car in a power easement corridor across the road to monitor the driveway. Sheriff’s deputies then began pulling over and citing individuals leaving the Namewag Camp for allegedly violating County Ordinance #36, which is a “Land Use Violation.”

On July 23, 2021, Minnesota 9th District Judge Jana M. Austad granted a temporary restraining order prohibiting the Hubbard County Sheriff’s Office from “barricading, obstructing, or otherwise interfering with access to the [Namewag Camp] property.” Judge Austad ruled fully in the plaintiffs’ favor—she found that the easement is a valid driveway that vehicles can legally drive on, and the Hubbard County Sheriff’s Office was in “substantial violation of plaintiffs’ right to the use and enjoyment of the property.” She also wrote that a blockade of the camp would likely be “a deprivation of constitutional rights.“

As we ended our call with Hefel, he mentioned how “organizing doesn’t end until every charge is dropped.” With over 700 arrestees and hundreds of citations, “a lot of water protectors are gonna need support through this whole legal process.” 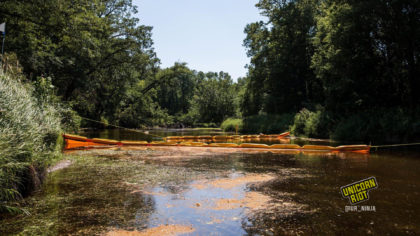 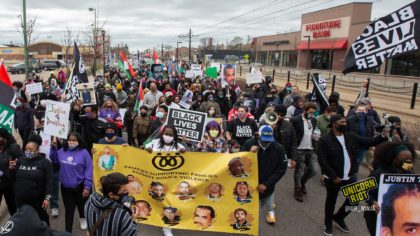